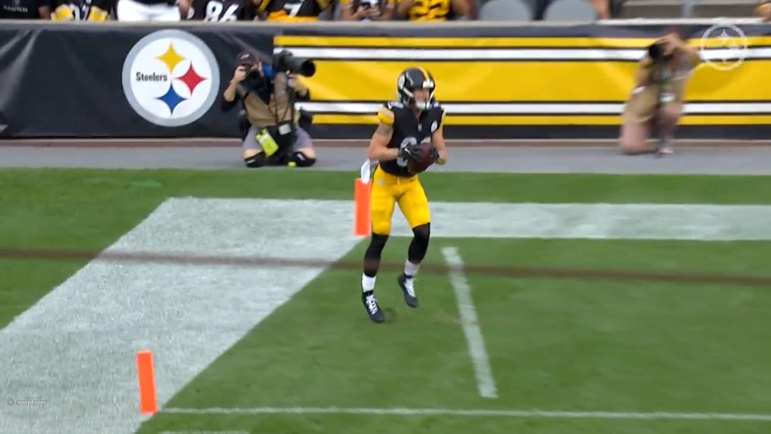 When the Pittsburgh Steelers signed wide receiver Gunner Olszewski in free agency early in the offseason, the belief was that the former New England Patriot would be a special teams ace for the black and gold, especially after earning a First Team All-Pro accolade in Foxborough as a returner.

Throughout training camp in Latrobe at Saint Vincent College though, Olszewski has flashed as a wide receiver, making a push to get onto the field more offensively.

That strong play in training camp carried over into the Steelers’ preseason opener Saturday night at Acrisure Stadium as Olszewski scored the first touchdown in the newly-named stadium on the North Shore, hauling in a 14-yard touchdown from new quarterback Mitch Trubisky, capping off an impressive opening drive in which Olszewski added a 25-yard catch and run against the Seahawks’ secondary.

Following the win over the Seahawks, Trubisky praised the small, shifty Olszewski in a press conference with the media, calling the scrappy receiver a “quarterback-friendly” weapon offensively.

“Yeah, he’s shifty. He gets open, he’s very quarterback friendly, and when he gets the ball in his hands, he has great run after catch,” Trubisky said to reporters Saturday, according to video via the Steelers official YouTube page. “He’s someone that you can rely on. Hee’s gonna be in the right place, and, like he did on that third down, made a guy miss and was able to extend the play. So, I’m glad he was getting the opportunity and he really showed out tonight.”

Olszewski certainly showed out on Saturday night in the preseason opener, leading the Steelers with three receptions for 47 yards and the score, tying with rookie George Pickens for a team-high with three catches.

While he’s known more for his strong play on special teams as a returner and coverage ace, Olszewski has shown in training camp to be a strong route runner overall who consistently creates separation in his routes and has good hands overall. Though he’s further down on the depth chart from a receiving standpoint overall than he was Saturday night due to injuries, he’s a nice depth option to have offensively, especially if he can keep up the strong level of play he’s shown in training camp and now in a real game-like setting.

Who knows? He could turn into that steady slot option the Steelers need moving forward. He has strong chemistry with Trubisky, and if the veteran holds down the starting job under center, maybe Olszewski sees more snaps offensively than anyone could have anticipated.