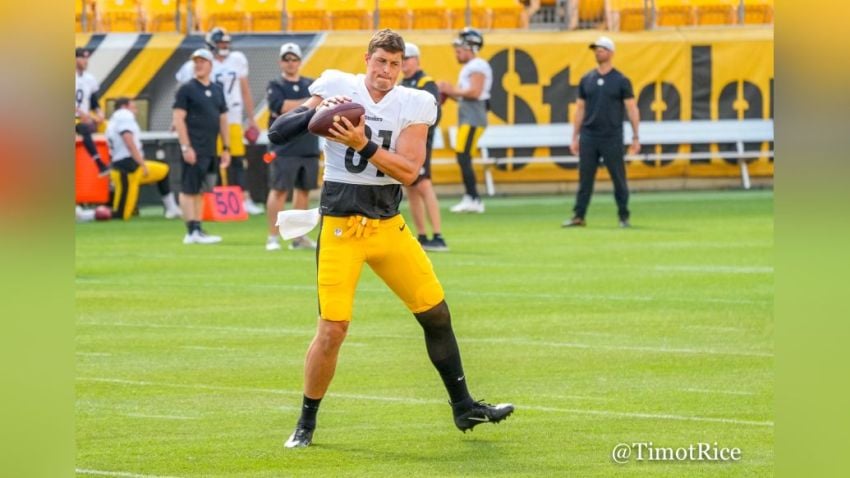 Returning to this series after a free agency break, a breakdown of TE Zach Gentry.

Pros: Rare height for a tight end. Added weight and filled out frame with good length (over 34 inch arms). Looks like a small offensive tackle. Much-improved blocker who has bettered pad level and doesn’t play so high/tall. Able to block 4-3 ends in run game and controls point of attack well. Willing and able in pass protection to slow down defensive ends. Comfortable as in-line tight end and working out of a three-point stance. Big-bodied frame to box out defenders in pass game. Shows some power in open field to run through players. Progressed well once he got healthy and chance to play. Quiet demeanor and seems like a good teammate who doesn’t make waves in locker room. Embraced rookie tight end in Pat Freiermuth who competed with him.

Cons: Rigid player who struggles to change directions. Definition of a straight-line player. Won’t separate from man coverage. Wins sitting down against soft zones or running the seam. Lacks upside and playmaking to be a #1 tight end. Doesn’t have special teams/coverage value other backup tight ends have. Want to see him be more explosive out of his stance.

Role: Became Steelers’ #2 tight end for most of last season, especially after Eric Ebron’s knee injury. Finished year with 19 receptions for 167 yards (8.8 YPC) and no touchdowns. Logged 473 offensive snaps in 2021 after having just 69 in his career up to that point. 139 snaps (28%) on special teams, primarily field goal kick and kick return units. Blocking allowed team to use tackle-over formations with Gentry as a “tackle” on 11 plays (7 RT, 4 LT).

Future: Gentry was a pleasant surprise in 2021 and has become the blocking tight end the team has been looking for years. He’ll never be a starter and doesn’t offer much in the past game but the offense is better off having him on the field as opposed to a sixth offensive linemen/tackle-eligible. He is the team’s new version of Matt Spaeth.