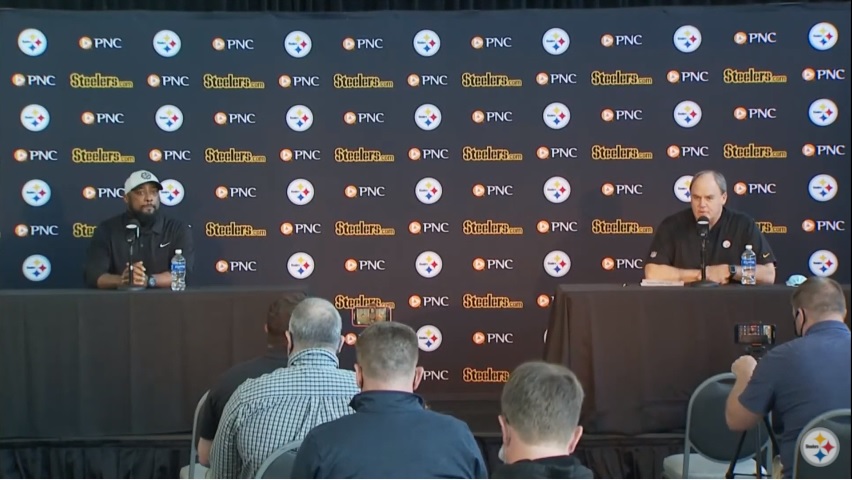 While there were many outlets who had negative responses to the Pittsburgh Steelers’ 2021 NFL Draft class, which we covered yesterday, not everybody felt that way. The latter group included two of the NFL Network’s head draft analysts, Lance Zierlein and Bucky Brooks, with Zierlein giving the Steelers an A- grade, the best in the AFC North.

“We’ve got a bunch of ‘Steelers’ on the Steelers now,” Zierlein said during an NFL Network segment in explaining his draft grade. In particular he discussed each of Pittsburgh’s top three picks, all of whom he believes will be major contributors.

“Let’s start off with Najee Harris. They said that they wanted to fix the run game, and I think, if you can’t find the offensive lineman that you want, how about a guy who can create for himself with a little bit of subtle wiggle, great vision, and very good power. He can run through contact,” he said of their first round pick. “And Najee Harris is just a downhill back. He’s got a little more juice than James Conner and Benny Snell had. I think this is a great Steeler to add to the mix.”

“I think Pat Freiermuth is gonna be clearly the best tight end they’ve had since Heath Miller,” Zierlein added of their second round draft pick, the first tight end they’ve selected earlier than Round 5 since 2007. “Freiermuth needs to get a little better as a blocker, but there’s still some meat on the bone there for him to improve. But he’s a good pass-catcher.”

“Another guy that I really liked for them is Kendrick Green, a center that can move and get out in front and help them as a pull blocker,” he said, with respect to their third-rounder. “I think he’s going to be the answer to Maurkice Pouncey as a rookie in the third round.”

Unfortunately, he didn’t touch on any of the team’s Day 3 selections, consisting of tackle Dan Moore Jr. and linebacker Buddy Johnson in the fourth round, defensive lineman Isaiahh Loudermilk in the fifth, edge Quincy Roche in the sixth, and defensive back Tre Norwood and punter Pressley Harvin III in the seventh.

It goes without saying that they are going to plug and play Harris right off the bat. Obviously, they still have Eric Ebron at tight end, but Freiermuth will contribute as well, and certainly will fulfill their blocking roles. Green has a great shot at winning the starting center job in training camp.

As for the rest, Harvin will compete for the punter job. From the sounds of it, they expect Moore to compete right away, as well. Due to a lack of depth, Roche is more or less a lock to make the team, and Johnson would be hard-pressed to miss out as a fourth-round pick. The rest will be competing for their roster spots.