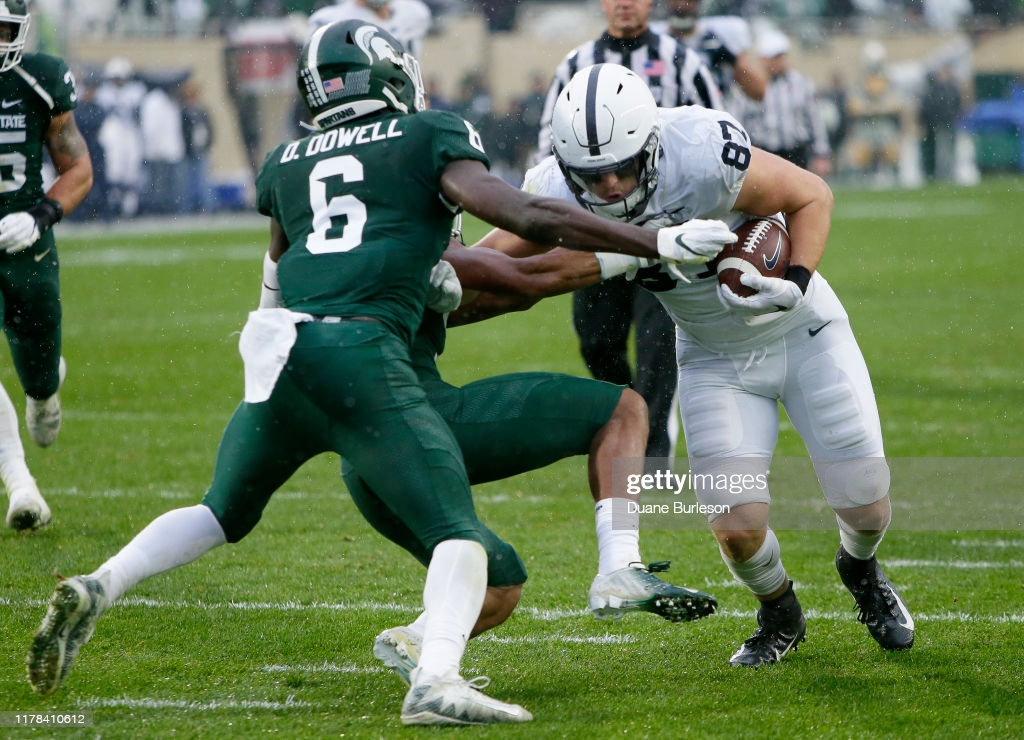 With the 55th of the 2021 NFL Draft (23rd in the second round), the Pittsburgh Steelers selected Penn State tight end Pat Freiermuth, nicknamed “Baby Gronk,” as the future starter for the franchise. Here is an introduction to the Steelers’ new tight end.

Freiermuth hails from Merrimac, Massachusetts, and played his high school ball at the Brooks School. During his H.S. career, Freiermuth was an all-state selection at both tight end and linebacker, appearing on several conference all-star teams and winning his team’s MVP award. His career as a tight end featured two 20-catch seasons for over 500 yards and six touchdowns each.

Freiermuth was rated a consensus four-star TE prospect, one of the top two players in Massachusetts, and one of the top 10 tight ends in the nation. Among his other offers were Ohio State, LSU, and Notre Dame, and he received more than 10 in total. He committed to the Lions in 2016, well ahead of schedule as part of the Class of 2018.

Off the field, Freiermuth majored in Labor and Human Resources, and went to school with the off-field goals of becoming a college coach or working in law enforcement. He was an all-star in high school as a basketball player, a sport also played by father, John. Freiermuth is also a writer in his free time.

Arriving in State College as a true freshman, Freiermuth started nine of Penn State’s 13 games as the team went 9-4 and lost in the Citrus Bowl. Freiermuth led the Nittany Lions and was second among all FBS tight ends in receiving touchdowns. He finished second on Penn State in both receptions and receiving yards. After the season, Freiermuth was chosen as a freshman All-American and appeared on the All-Big Ten as an honorable mention.

Penn State honored Freiermuth as a team captain in 2019 as a true sophomore. He once again finished second on the PSU roster in receptions and receiving yards, and dropped from the leader to second in touchdown receptions (he still finished fourth among all FBS tight ends) while starting all 13 games of the season. Penn State finished 11-2, appearing in and winning the Cotton Bowl.

Following the season, multiple media outlets named Freiermuth an All-American, appearing as high as the second team and as low as the fourth team. He was a consensus All-Big Ten selection, appearing on the first and second team from various outlets. The Nittany Lions named him the team’s Most Valuable Player on offense, and chose him as their Captains’ Award winner. Freiermuth appeared on the John Mackey Award Watch List, for the nation’s best tight end.

Despite most ranking him as the prospective No. 1 tight end in the Class of 2020, Freiermuth elected to return to Penn State for his junior season. He was chosen as a captain for the second time, and started the first four games for the Lions before suffering a season-ending shoulder injury (a torn labrum), which required surgery. Penn State went 0-4 during a lengthy winless start, and Freiermuth played hurt throughout most of it (he went for over 100 yards in his final game before ending his season).

He still finished the season as the Big Ten’s leader among tight ends in receiving yards, and was third on the team in receptions and receiving yards, and finished as the team’s leader in both categories among tight ends despite missing the final five games of a 4-5 season (no bowl game). At the end of the year, he was the first Penn State tight end to ever win the Kwalick-Crick Award as the Big Ten’s best TE. He appeared on the All-Big Ten team once again, appearing on the first and second teams from multiple outlets. Prior to the season, Freiermuth was not only a first team Preseason All-American, but appeared on both the Mackey and Biletnikoff Award Watch Lists.

Freiermuth leaves the Nittany Lions after three seasons as the school’s career record holder for touchdown catches by a tight end. His career ranks in program history are eighth in touchdowns, 26th in receiving yardage (third among tight ends), and 20th in receptions.

Freiermuth appeared in 30 games in his Penn State career over three seasons, catching 92 passes for 1,185 yards (a 12.9 average) and 16 touchdowns. Here are his stat lines by season:

Like first round pick Najee Harris, Pat Freiermuth was a player the Steelers were known to be coveting. General manager Kevin Colbert, head coach Mike Tomlin, and tight ends coach Alfredo Roberts all attended the Nittany Lions’ Pro Day, with Roberts putting him through drills.

Freiermuth did not receive the considerable level of first-round buzz this draft process that he received while considering whether to enter the 2020 class, but was consistently viewed as an early Day 2 pick, and likely second-round selection. Among the other teams linked to him with the Steelers were the New York Jets and Jacksonville Jaguars.

Check out Freiermuth’s pre-draft scouting report, put together by our Wesley Cantliffe.

Incumbent starter Eric Ebron, with one year left on his contract, blocks Freiermuth’s path to a starting role. He instantly slots in as the team’s No. 2 at the position and a full-time player in two-TE sets, and is a considerable upgrade over the team’s back-ups on the roster (as well as former No. 2 TE Vance McDonald).

Freiermuth brings much more upside and skill as a blocker than the all-receiving Ebron, and also profiles as a talented pass-catcher at the NFL level. He is the likely No. 1 TE in all situations following the 2021 season, with the potential to work his way into the starting lineup before his rookie season concludes.