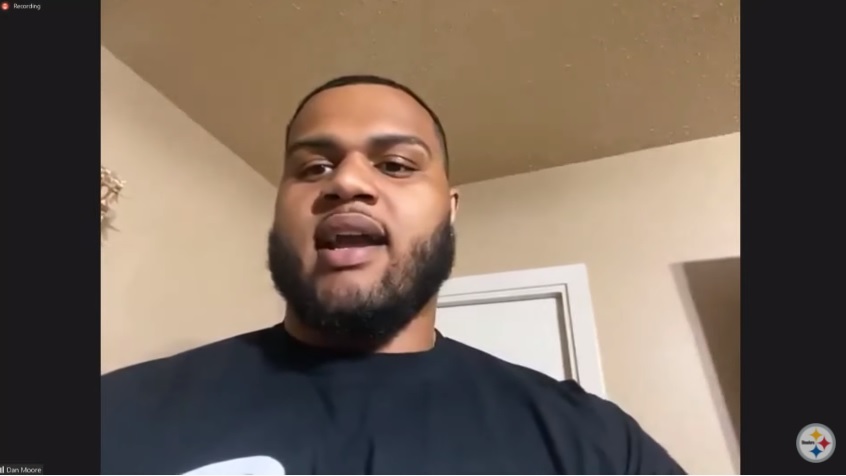 With the 128th pick of the 2021 NFL Draft (23rd in the fourth round), the Pittsburgh Steelers selected Texas A&M offensive tackle Dan Moore Jr. as possible competition for a starting tackle spot against Chukwuma Okorafor and Zach Banner. Here is an introduction to the Steelers’ new offensive lineman.

Dan Moore Jr. is from Beaumont, Texas, two hours northeast of his future college home at Texas A&M. Moore played exclusively along the offensive line at West Brook High School, where his Bruins team went 11-2 his senior season and advanced to the third round of the 6A state tournament, Texas’ largest high school classification.

Moore was recruited as a guard, where he was ranked a three-star prospect and a top 50 player at his position in the country. He received over 15 offers, including from Oklahoma State, Mississippi State, Missouri, and Ole Miss.

Moore played primarily as a backup during his true freshman season of 2017, as the Aggies went 7-6 and lost in the Belk Bowl. He primarily played left tackle, but earned his first career start at right tackle that season.

Moore’s play earned him a promotion to the starting lineup as a left tackle in 2018, where he started all 13 of the team’s games in a 9-4 season which ended in a Gator Bowl victory. During that season, Texas A&M was third in the SEC in rushing yardage per game, but tied for the most sacks given up.

Moore remained in the starting lineup as a junior in 2019, starting all 13 games once again at left tackle, as the Aggies went 8-5 and won the Texas Bowl. A&M finished eighth in the SEC in rushing, and surrendered the second-most sacks in the conference.

Moore began the 2020 season as a Preseason All-SEC selection (third team), and was named to the Outland Trophy Watch List as the nation’s best interior lineman. He was once again a full-time starter at left tackle, playing in all 10 games as A&M went 9-1 and won the Orange Bowl. The Aggies finished second in the SEC in rushing that season, and gave up only seven sacks all year, the fewest in the conference. The offensive line was a finalist for the Joe Moore Award, and Moore was named to the All-SEC second team, his first postseason honor.

Moore played in 44 games during his four years at Texas A&M, starting his final 36, all at left tackle. He played over 850 snaps in both of his full seasons as a starter, and played almost 700 snaps during a shortened 2020 season. Here are his stat lines by year:

Like Kendrick Green on Day 2, Moore was an offensive lineman who was not among the most-linked names to the Steelers during the pre-draft process. The Steelers did have offensive coordinator Matt Canada and assistant OL coach Chris Morgan at his Pro Day, though other prospects performing that day were lineman Carson Green and QB Kellen Mond.

Tackle was a position everyone agreed the Steelers would take during the 2021 NFL Draft, with the intent to provide some competition primarily to presumed LT Chukwuma Okorafor, as well as RT Zach Banner. Moore’s selection tabs him as the player to push Okorafor for a starting spot as a rookie, and Moore’s career experience as an LT in the SEC indicate he is more likely to challenge Okorafor than the recently re-signed Banner.

Our Kellen Bryant profiled Moore, and indicated Moore was more of a depth piece and rotational option rather than a true starting candidate, and suggested he could move inside to guard. Bryant labeled Moore a Day 3 selection. As the first tackle taken, Moore is likely going to see a larger opportunity than that, if his play can translate to the NFL level and the Steelers’ scheme.