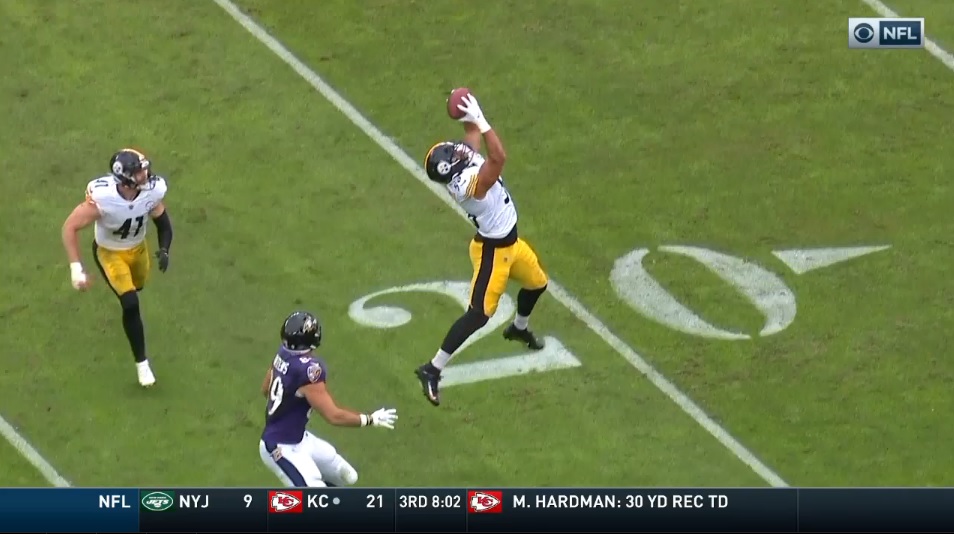 The loss of Bud Dupree leaves a big hole on the right side of the Steelers defense and will be difficult to equal his play.  I would expect the task of replacing him to be by several players but the man getting the bulk of the reps on the right side will likely be rookie Alex Highsmith.

The third round pick has been a solid rotational player thus far this year providing good production in limited snaps. He has played 139 snaps on the defense and 216 snaps on special teams and has registered 20 total tackles with 14 being solo.  He has three tackles for a loss, one sack and one interception and has provided quality depth at a position that was lacking prior to the season.

This week we heard from defensive coordinator Keith Butler and his opinions point in a positive direction moving forward.  Butler considers Highsmith easy to coach, assignment sound and thinks he has good football mind.

I’ve re-watched every snap for the rookie and he has done a lot of positive things along the way.  I wanted to highlight some of what he has done and give you an idea of what to expect not only this week against Washington but for the rest of the season.

Per our charting Highsmith has been on the field for 60 running plays with 26 coming on the left side, 33 on the right and one inside. He has made plays on both sides and seems very comfortable in his role.  He is assignment sound performing what is asked of him within the scheme and executing it well.

To this point in the season I think his run defense has been better than his pass rushing. He has shown the play strength and use of hands needed to set the edge and be able to shed blockers.  He reads the play well and is solid from the backside.  He is a very strong tackler able to minimize yardage after contact with the ball carrier.  To this point he has not missed a tackle.

In week three against Houston, Highsmith (56) is lined up on the left side. He will engage the right guard with strong hands to keep the OL off him. He displays good footwork to slide with the blocker, holding him off to the inside while corralling the runner with his outside arm.

Week 6 against Cleveland he is lined up over the tight end and processes the play quickly reading the movement of the offensive lineman and shows good acceleration to beat the tight end and the right tackle to the inside and track down the runner.

This past week against the Ravens while playing on the right side (left side of the clip) he’ll take on the left tackle with eyes in the backfield and is able to shed him and come back to the inside to make the tackle.

Pass rushing was one of his better qualities coming out of college and he has flashed that ability as the season has endured.  I feel like on a lot of his pass reps he is playing cautiously meaning he is making sure it’s not a run before getting up field. This may be limiting his effectiveness and production but the ability is definitely there and he should be able to showcase it more moving forward.

His most used pass rush is one all the Steelers outside linebacker’s use where they get up field on the outside versus the tackle and will hop past the blocker and will use chop/swipe to clear the OL’s hands to get around the corner.  He has also use other options including bull rushes, arm over/swim moves and recently a ghost technique rush.

From the left side against the Giants his acceleration at the snap is very good and he’ll swipe at the lineman’s hands with his right arm while hopping up field to plant his left foot and flatten to the QB. He then displays very good pursuit across the field to chase the QB and force the throw away.

Against Cleveland, he will start up the edge before stabbing with his right arm and cutting to the inside and using an arm over to beat the right tackle that then drags him down by his left arm to prevent a hit on the QB.

This past week against Baltimore he showed a ghost technique rush where he is going to fake a stab with his left arm and when the left tackle extends his hand toward Highsmith he will duck under and rip with his inside arm if necessary and accelerate to the quarterback.

He hasn’t been used that often in coverage but he has been effective.  He has played some Man and Zone coverage and looked fairly comfortable doing both. When he got his first interception in the first matchup with Baltimore he said after the game that he had learned from a play earlier in the game and adjusted the depth of his drop allowing him to make the play on the ball.

We as fans don’t like to see the Steelers linebacker in the slot covering wide receivers but he has revealed the athleticism to make it tough for receivers.

Earlier this year against the Cowboys he was in the apex splitting the distance between the end of the line and the slot receivers and his responsibility being any receiver that comes inside.  He reads the in breaking route and stays with the crosser on the incompletion.

Against Tennessee he will move out over the slot receiver and he displays a nice hip flip and acceleration to combat the throw and make the tackle.

And again this week against Baltimore he is split out on the slot to the top and does a nice job to stay with him on a 15 yard route to the outside.

What Can We Expect

Dupree averaged about 55 snaps per game this year with a high of 80 against Baltimore averaging about 85% per game. Highsmith has averaged 12.5 defensive snaps per game with high of 25 also against Baltimore. For this week I would guess his usage will go up toward the 45 to 50 snap range or 75 to 80% of the defensive snaps with a gradual increase the rest of the season.

Against the run I am expecting assignment sound football from Highsmith. He will know his role and execute it. I don’t expect him to go off script or freelance like a veteran may do.  He should be strong on the edge and play smart football. He doesn’t have the consistent play recognition and quickness from the backside as Dupree (not many do) but it shouldn’t be a sharp drop off.

For this game, I am not expecting a lot as a pass rusher.  Against the pass he has shown glimpses of what he can do along the way and like I said earlier I think that is more about playing safely rather than pinning his ears back and going after the QB. He has the snap quickness and assortment of ways to attack the OL and keep him stressed on his own and we will also see him on stunts looping to the inside.

Washington’s offensive coordinator Scott Turner is going to test Highsmith.  They will run at him, around him and test him with misdirection.  He will likely face Cornelius Lucas or Morgan Moses and both tackles have a lot of length so how Highsmith handles that will be key for his success.

As the year progresses I am looking forward to seeing improvement in his hand usage (chops/slaps) to keep the hands of the offensive lineman off of him and as his play recognition becomes more consistent as a starter I’d expect a steady improvement applying pressure to the end of the year.

I am tempering my expectation from him in his first start but I am expecting him to handle himself well and provide stability as the next man up.