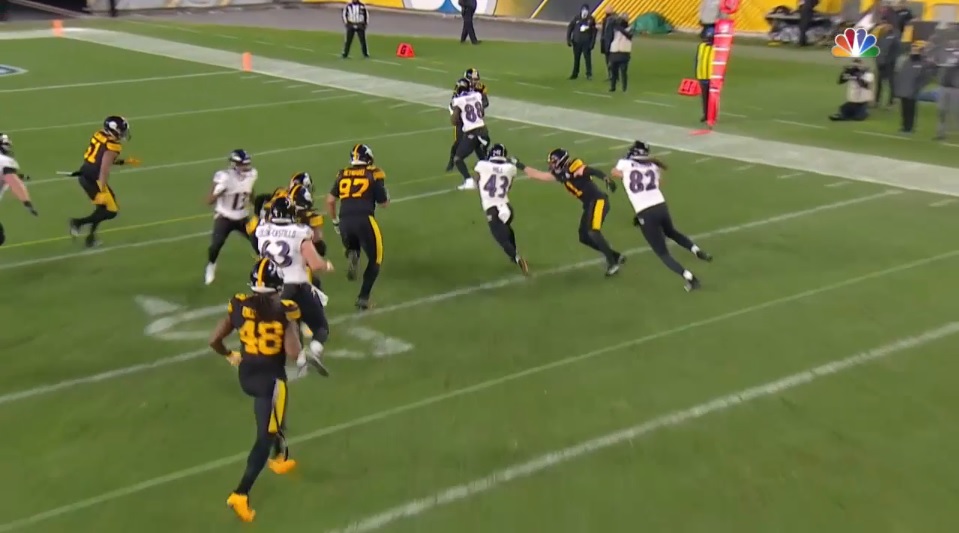 The missed tackles reports throughout the season for the Pittsburgh Steelers have been a microcosm of the season so far.

Sometimes, the Steelers look incredible when it comes to tackling, and then other weeks they’re quite sloppy, turning in poor performances.

Wednesday’s win over the Baltimore Ravens was closer to the sloppy version than the incredible version. A handful of key tackles played a significant part in keeping the Ravens in a game that felt like the Steelers were in control of throughout.

Let’s get to the Week 12 missed tackles report.

Well, we see a couple of new name crack the missed tackles report this week. Welcome to the club (I think), Cam Heyward and Avery Williamson.

Despite the missed tackle, Heyward has the best miss rate on the list at 2.7%.

Aside from Heyward, let’s talk about Terrell Edmunds. Edmunds was playing some terrific football coming into the Week 12 game, but against the Ravens, Edmunds seemingly fell off of a cliff, recording two missed tackles, which led to two explosive plays for the Ravens – one of which was Hollywood Brown’s 70-yard touchdown late that kept the Ravens in the game. You’ve seen it plenty of times, so I won’t highlight it here.

He has to bounce back from the Week 12 performance and be who he was before the game. The defense needs it, especially with the loss of Bud Dupree.

Let’s look at some misses.

Here in the flat following a short dump-off from Robert Griffin III, Hill puts Cameron Sutton in a blender, forcing a missed tackle in space.

Later on in the first half, Hill struck again, forcing – by my count – three missed tackles on this third-down run for 19 yards, gathering guys like TJ Watt, Heyward, and Williamson for the missed tackles report.

I went back and forth with giving Watt a missed tackle on this, but he’s right there and needed to make a decision, rather than getting caught flat footed like he was.

I gave him a miss, which then leads to Hill powering downhill, breaking tackles from Williamson and Heyward before Minkah Fitzpatrick corrals him to the ground, saving a touchdown. That ended up being a massive tackle, because Luke Willson ended up dropping a touchdown – thanks to Fitzpatrick – as time expired in the first half.

Benny Snell Jr. was simply fantastic Wednesday, in terms of creating runs on his own behind a porous offensive line. Snell’s seven forced misses sets a career high.

He was impressive as a runner and receiver, forcing a handful of misses in each facet of the game.

We never really saw Snell win in space one-on-one last year, but he did a great job throwing a quick, powerful stiff arm to LJ Fort in space following a short dump-off from Ben Roethlisberger, forcing the missed tackle to move the chains.

Then, late in the game on the final drive, he introduced Marcus Peters to “Benny Snell Football.”

My goodness. I hope Peters got the license plate on that truck.

Somehow, Peters was credited with the tackle in the end, per GamePass and ESPN. But that’s a forced missed tackle by Snell, without a doubt.

Earlier in the game, rookie Anthony McFarland showed some flash as a receiver, forcing a miss after the catch.

We haven’t seen this yet from McFarland, but on Wednesday it really jumped out to me.

He shrugs off Ravens safety DeShon Elliott in space after the catch and then adds another five yards to the end of the catch, moving the chains. I love the stiff arm at the end to Jimmy Smith. It shows things are slowing down for him and he’s starting to trust himself, relying on his abilities.