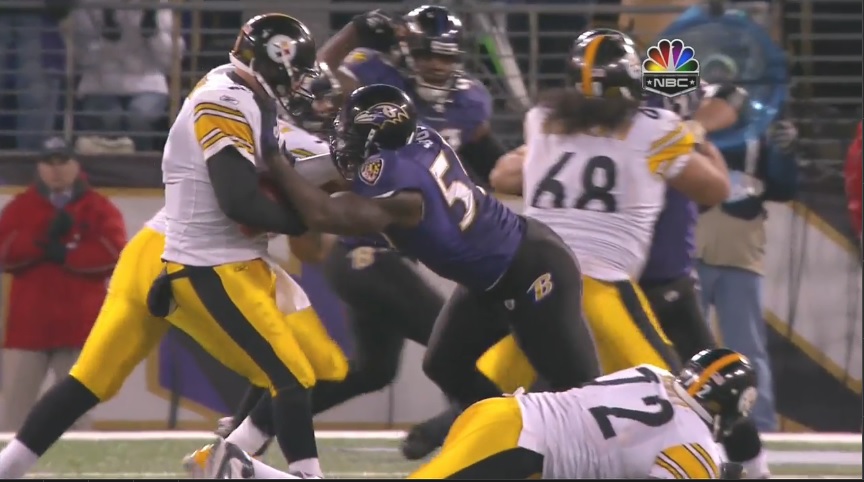 I’m sure there are plenty I’ve missed so let me know your selections in the comments below. We’ll take this series two at a time, counting down the top ten until we reach #1. We’ll jump into #3-4 below but here are links to the previous installments of this list.

If there was a moment to sum up Ben Roethlisberger vs Terrell Suggs, or even Steelers vs Ravens a decade ago, it’s this one. Two players in their prime, under the bright lights of primetime football, with the game on the line. Suggs whipped LT Jonathan Scott off the edge and had a free shot at #7.

With Baltimore up four and three minutes left, Suggs went for the ball. Somehow, Roethlisberger managed to peel away from Suggs, fighting him off and turning his body to flip the ball left-handed to the sideline incomplete. Saved the sack and the time.

This is one of my favorite Roethlisberger plays of all-time. The fight, the will, the never-quit attitude that encapsulates his attitude, competitiveness, and how special this rivalry was in its peak.

My 2nd favorite Ben Roethlisberger play of all-time, only trailing his Super Bowl throw to Santonio, is an incompletion. The strength to fend Suggs off, throw the ball away, make an impossible play (with a broken nose) sums up his game and the Steelers/Ravens rivalry. pic.twitter.com/pr3LYo7DCb

The Steelers were going to the Super Bowl.

For a moment, then they weren’t.

Jerome Bettis coughed up the football at the goal line in the AFC Divisional Game against the heavily-favored Colts. Safety Nick Harper picked it up, racing the other way. Pittsburgh was in their goal line formation, nothing but linemen and tight ends, no one with the speed to catch him.

The only person in the way was Roethlisberger. And he came up with an iconic, incredible, shoestring tackle to prevent the touchdown and very likely Steelers’ loss. That stopped the Colts at their own 42. Peyton Manning would drive them into field goal range but Mike Vanderjact shanked a 46 yard attempt wayyy wide right, preserving the Steelers’ win.

That attempt wouldn’t have even happened had it not been for Roethlisberger’s tackle. It’s also worth pointing out Harper was stabbed in a domestic incident the day before the game, perhaps slowing him up on this return. Either way, what a bonkers effort by #7. Pittsburgh would go on to beat Denver in the AFC Title game and win their 5th Super Bowl in Detroit, sending Jerome Bettis out a winner.