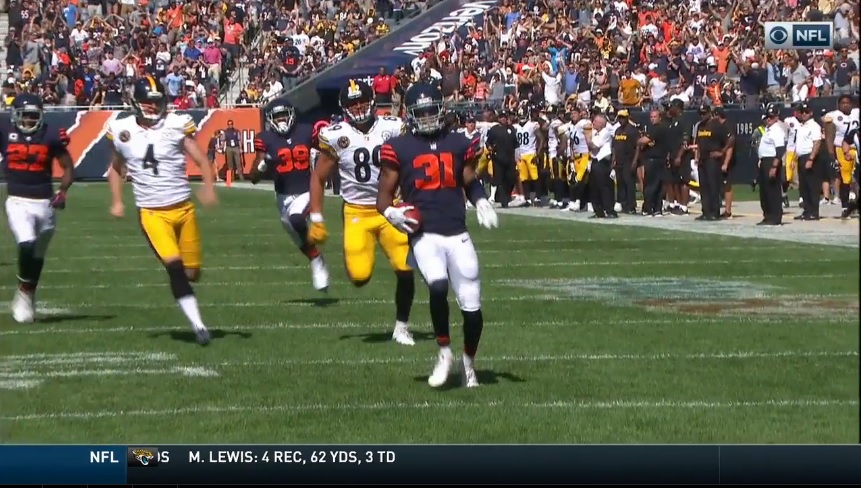 I’m sure there are plenty I’ve missed so let me know your selections in the comments below. We’ll take this series two at a time, counting down the top ten until we reach #1. Two days, we checked out the first two entries of this list. Today, we look at #7 and #8.

It’s Week 17. The Steelers are playing the Browns in a meaningless game. Backups are in, Pittsburgh’s looking ahead to the postseason, making it easy for players to slow down and not treat this like the Super Bowl.

Landry Jones threw a pick (drink) late in the third quarter, intercepted by Browns’ DB Briean Boddy-Calhoun. It should’ve been a pick six and nearly was until DHB raced across the field to knock the ball out right before Boddy-Calhoun crossed the goal line.

It saved the touchdown, ruled a touchback and allowing Pittsburgh to retain possession. They’d go on to come back and beat the Browns 27-24 almost directly thanks to this moment by DHB.

These plays embody the series. Ones that didn’t have to be made. No one would’ve noticed or paid much mind if DHB wasn’t hair-on-fire running across the field and poking the ball out. That was just the type of guy he was.

If you’re old enough or thumbed through enough Super Bowl highlights, you know who Don Beebe is. And you know which play he’s known for. Tracking down poor Leon Lett and taking away his Super Bowl touchdown.

Vance McDonald did his best Beebe impression at the end of the first half in the Steelers’ 2017 matchup against Chicago. Chris Boswell’s kick was blocked, ricocheting into Marcus Cooper’s hands. He had a good 10 yard head start and clearly faster than McDonald. But he slowed up approaching the goal line. McDonald didn’t. At the one, McDonald caught him and stripped the ball out, saving the touchdown.

The Bears still got a field goal out of it after Jordan Berry’s illegal bat (the half can’t end on penalty) but it still saved the Steelers four points. Ultimately, they lost the game, but McDonald’s effort didn’t go unnoticed.