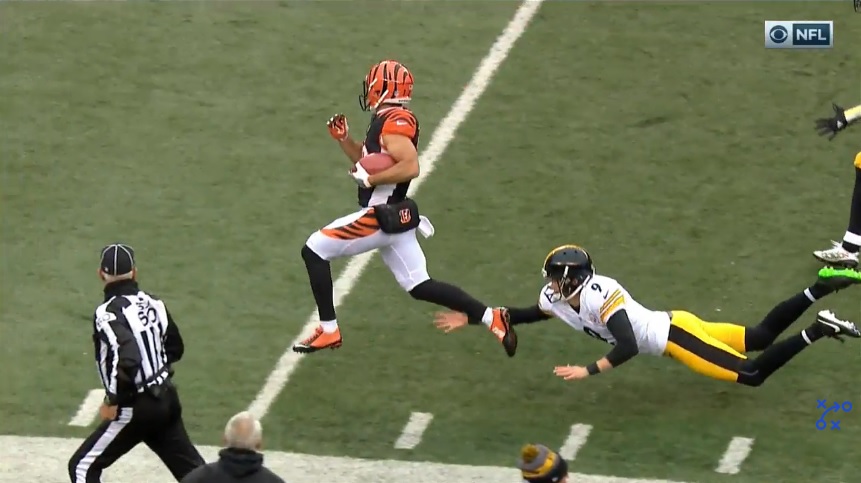 I’m sure there are plenty I’ve missed so let me know your selections in the comments below. We’ll take this series two at a time, counting down the top ten until we reach #1. For now, let’s check out #10 and #9.

Often times, the best hustle plays come on special teams. Rarely though do they come from specialists. Chris Boswell proved to be the exception in 2016 in what honestly might be the best performance by a Steelers’ kicker in history.

Not only did he go 6/6 on field goals that day, he saved this touchdown with a shoestring tackle on Bengals’ kick returner Alex Erickson. The Steelers’ defense held up the end of their bargain, holding Cincinnati to just a field goal in what would be a 24-20 Pittsburgh victory. Saving those four points definitely mattered.

Gotta love the effort from Boz here. Pretty remarkable play. He earned a much-deserved game ball for this performance.

For lists like these, I prefer to try to find some obscure plays most fans haven’t seen or long forgotten. Searching “effort” plays can be difficult but I came across this classic Jerome Bettis run on MNF versus the Kansas City Chiefs in 1996.

At first, it looks like Bettis is easily stopped at the line of scrimmage. But the Bus kept his wheels spinning, somehow had the balance to stay on his feet and ran through two tacklers before crossing the goal line.

That touchdown would be the Steelers’ only trip to the end of the day but they walked away with a 17-7 victory. Bettis finished the day as the workhorse, carrying the ball 27 times for 103 yards and that high-effort score.