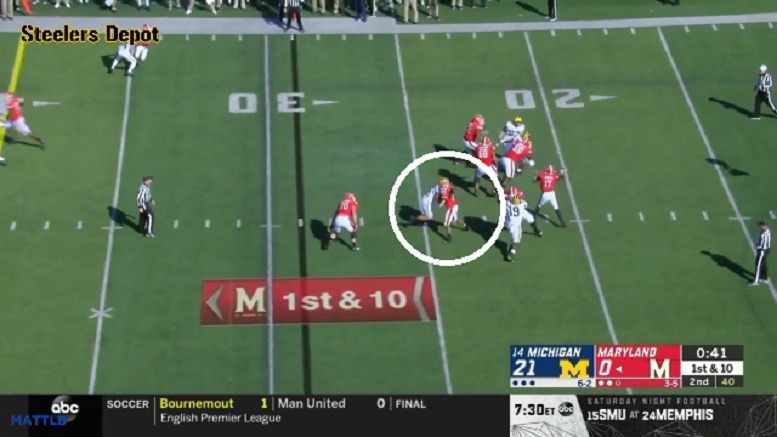 The Pittsburgh Steelers selected Maryland running back Anthony McFarland Jr. in the fourth-round of the 2020 NFL Draft and since then we have dedicated several posts to his running and pass catching abilities. However, what we’ve yet to deep dive into with McFarland to date since he was drafted by the Steelers is his pass protection and that now changes as of this series.

This series now continues with McFarland’s pass protection plays in Maryland’s third set of three games of 2019 against Indiana, Minnesota, and Michigan.

Against Indiana, McFarland sat out the entire contest with an ankle problem that he had been having issues with so of course there are no pass protection plays to recap from that game. He did, however, play against Minnesota and Michigan and in total, he had five pass protection plays worth recapping and they are below.

Against Minnesota, McFarland had two pass pro reps and the first one included him having to pick up a blitzing linebacker right up the gut. While he didn’t have much grass to work with, McFarland did give a nice effort on this play and even initially won the rep by turning the blitzer out of the pocket. The linebacker, however, eventually worked free of the smaller McFarland to the outside and was able to hit the Maryland quarterback. That hit, buy the way, knocked the Maryland quarterback out of the game. In totality, McFarland did a good enough job to but his quarterback more time.

Later in that same contest against Minnesota, McFarland was asked to pass protect on a designed roll-out to the right inside the red zone. This doesn’t go as planned from a protection standpoint and it certainly appears as though McFarland and the h-back have an uncertainty about who is responsible for which guy. This all results in a defensive player coming free and pressuring the Maryland quarterback into a throwaway.

Against Michigan, McFarland needed to help pass protect a defensive end that had easily disposed of the attached Maryland tight end. That effort by McFarland, who may have been asked to release out of the backfield on the play, didn’t go to well. The Michigan defensive end easily worked around McFarland for what would become a quarterback hit. Bad rep aside by McFarland and the tight end on the play, the Maryland quarterback did manage to complete the pass down the middle of the field.

On this final pass protection rep against Michigan, McFarland is saddled with the responsibility of taking on a defensive tackle, who had easily disposed of the Maryland guard with a push pull move. Despite there being a huge size differential, McFarland willingly took on the much bigger Michigan player and kept him at bay long enough for the quarterback to get rid of the football. While the Michigan defensive tackle wouldn’t have likely made it to the Maryland quarterback in time had McFarland not been there as a safety valve, the fact that the running back had the willingness to take on the bigger player and do so effectively was impressive.

Summary: In what was just two games played for this section of the series, McFarland had five total pass protection reps and as a whole, one must like the overall effort he gave on each. Even the first one that resulted in the Maryland quarterback getting injured wasn’t an awful rep for a smallish player such as McFarland. The overriding narrative so far in this series is that McFarland, despite his size, has the willingness and wherewithal to pass protect and do so at an acceptable level for the most part. It will now be interesting to see how McFarland fares in the pass protection department in Maryland’s final three games of the 2019 season. That post will be along in a day or two.