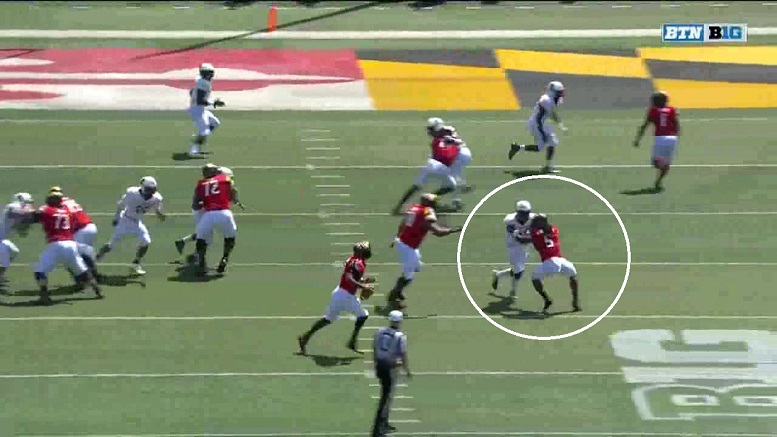 The Pittsburgh Steelers selected Maryland running back Anthony McFarland Jr. in the fourth-round of the 2020 NFL Draft and since then we have dedicated several posts to his running and pass catching abilities. However, what we’ve yet to deep dive into with McFarland to date since he was drafted by the Steelers is his pass protection and that now changes as of these next several days.

This series now begins with McFarland’s pass protection plays in Maryland’s first three games of 2019 against Howard, Syracuse, and Temple.

The first example of some sort of 2019 pas protection from McFarland that we have comes in the Maryland opener against Howard. While there isn’t necessarily much to see on this play, at least we see the acknowledgement from him that the blitzing defensive back is his responsibility and an effort on his part to escort the defensive player around the arc. That’s all he really needed to do on this play.

Hers McFarland showing nice effort during a quarterback roll-out against Howard. He did a great job of running interference on Howard defensive end Zamon Robinson, who is listed at 6-4, 225-pounds, after he was outside of the Maryland tackle. The subsequent pass was not completed, but at least the quarterback had plenty of time to get rid of the football.

This next bit of pass protection by McFarland against Syracuse was the best he sowed in the first three games of the 2019 season. He went after the first cross blitzing linebacker coming free and got just enough of the defensive player to allow the Maryland quarterback to get rid of the football for a nice completion and a first down.

Here we have McFarland coming across to help the Maryland tight end keep Temple defensive end Quincy Roche at bay by escorting the player around the arc. The main thing to focus on here is the awareness and the willingness. Roche, by the way, is listed at 6-4, 235-pounds.

Here is McFarland willingly stepping up to take on a blitzing Temple linebacker on a quick pass.

Here is McFarland providing some adequate help to a Maryland right tackle against a Temple defensive end.

Summary: As a whole, we can observe McFarland showing a lot of willingness and awareness in these eight pass blocking efforts in Maryland’s first three games of 2019 against Howard, Syracuse, and Temple. There is one very nice effort in this selection of eight plays and one not so great one. For a running back of his size, I thought he represented himself well as a whole in these eight plays. We’ll see how he does in the next three Maryland plays in my next post in this series.