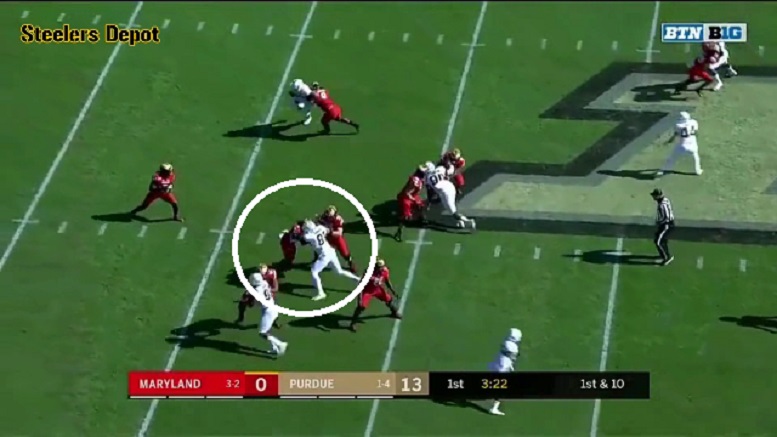 The Pittsburgh Steelers selected Maryland running back Anthony McFarland Jr. in the fourth-round of the 2020 NFL Draft and since then we have dedicated several posts to his running and pass catching abilities. However, what we’ve yet to deep dive into with McFarland to date since he was drafted by the Steelers is his pass protection and that now changes as of this series.

Against Penn State, Maryland was blown and it not only did McFarland not have any real pass protection plays in that contest, he also was on the sideline a good portion of the second half because of the score. As for McFarland’s pass protection in the two games against Rutgers and Purdue, he only had one real opportunity in each of those contests and they are highlighted below.

Against Rutgers, McFarland’s lone true pass protection rep was a quality one that happened in the first quarter. On this play, McFarland stepped up and helped the center cut off the wedge of the blitzing linebacker.

Against Purdue, McFarland again only had one real pass protection rep and you can see it below. This rep, while ultimately effective because the blitzer never reached the quarterback, did not feature great technique at all. Not only did McFarland not eat of some grass and attempt to close space between himself and the blitzer, he also just led with his head as if he decided last-second that he didn’t want to attempt a cut block of the legs. he basically was just swam over to the outside and wound up on the ground.

Summary: Three whole games and just two pass protection reps shows how little McFarland was asked to do that during the 2019 season. It’s worth noting that the ankle injury that limited most of the 2019 season also happened in the first quarter of the season. Additionally, him being ion both sides of blowouts in these three games against Penn State, Rutgers and Purdue led to him not playing a huge percentage of snaps in the second halves of these contests. Of the two pass protection reps that we have from these three games, one was good and one wasn’t.