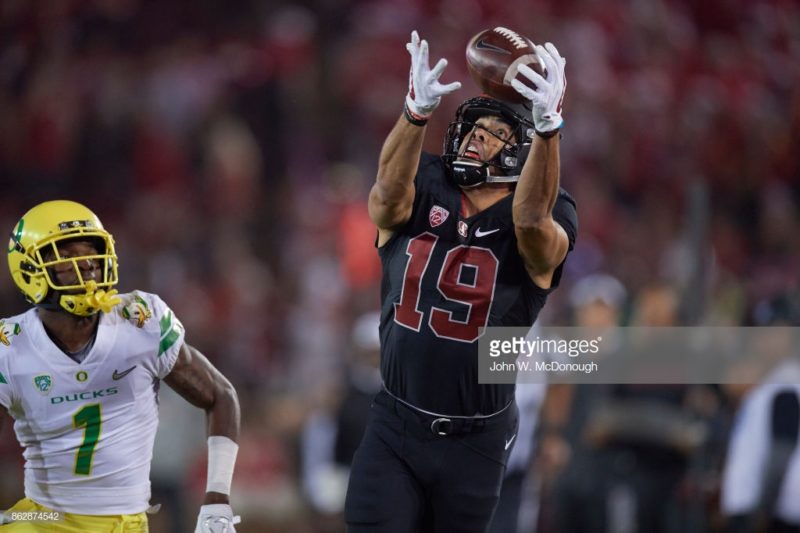 Steve Palazzolo of Pro Football Focus released his final mock draft of 2019 on Tuesday and his three-round projection includes the Pittsburgh Steelers selecting two wide receivers, an inside linebacker and an edge-rusher with their currently scheduled four picks.

Palazzolo, however, wants to make sure everyone knows that this annual mock draft is him playing the role of general manager for all 32 teams and thus it’s what he would do and not what he ultimately predicts to happen

In the first-round, Palazzolo has the Steelers selecting Stanford wide receiver JJ Arcega-Whiteside at No. 20 overall and he writes of the pick:

Another good wide receiver fit, Arcega-Whiteside has led the draft class in contested catches in each of the last two years, as he combines incredible physicality and body control at the catch point. He’s also adept at getting off the line of scrimmage to go with 4.49 speed, making him one of our favorite receivers in the class despite inconsistent evaluations in the draft community. Arcega-Whiteside needs to be paired with an aggressive quarterback, making him a good match with Ben Roethlisberger.

At this year’s scouting combine, Arcega-Whiteside measured in at 6020, 225-pounds with 33 1/4-inch arms and 9 1/2-inch hands. He didn’t do any of the on-the-field drills while in Indianapolis, but at his pro day he ran the 40-yard-dash in 4.49-seconds and registered a vertical jump of 34-inches to go along with a 09’11” broad jump. His 20-yard shuttle time was 4.41-seconds at his pro day while his 3-cone time was 7.23-seconds. An underclassman in this year’s draft class, Arcega-Whiteside caught 135 total passes at Stanford for 2,219 yards and 28 touchdowns. Last season he caught 63 passes for 1,059 yards and 14 touchdowns. During his college career at Stanford, Arcega-Whiteside prided himself at knowing how to play every offensive wide receiver position and after initially playing in the slot, he moved all around from there. At the NFL level, however, the Stanford product probably best projects as a X receiver.

In the second-round of his final 2019 mock draft, Palazzolo has the Steelers selecting Notre Dame linebacker Te’von Coney.

In the third-round, Palazzolo has the Steelers selecting Eastern Michigan EDGE Maxx Crosby.

Crosby measured in at this year’s scouting combine at 6047, 255-pounds with 32 7/8-inch arms and 9 3/4-inch hands. He ran his 40-yard-dash in Indianapolis in 4.66-seconds and registered a vertical jump of 36-inches to go along with a 10’02” broad jump. His short shuttle time was 4.13-seconds and his 3-cone time was 6.89-seconds. In the 37 total games that Crosby played in at eastern Michigan he started 24 times on his way to registering 162 total tackles, 20 sacks, 8 forced fumbles, an interception and 6 passes defensed.