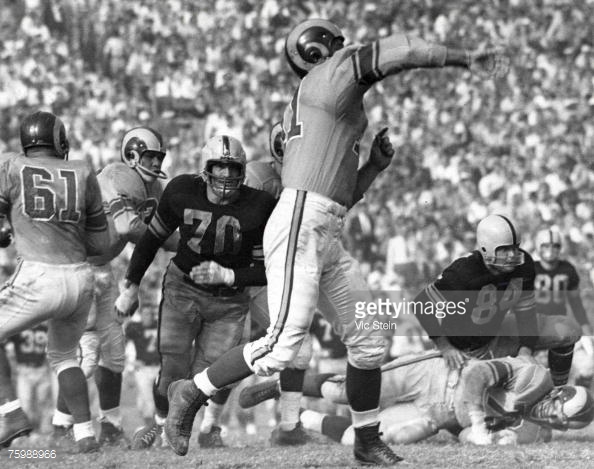 We’re going to continue our list by looking at the players ranked 59 through 50. Dave has the next grouping and we’ll switch off until we get to player number 20, when we’ll post just one at a time. If you are wild enough to create a list, post them below. It’s harder than it seems.

Ready, set, rank.
If you missed our previous posts in this series, you can find them at the links below:

Kirkland may be best remembered, at least, this is how I will, for shoulders broad enough to taxi a 747. He was listed at 6’1, 270 pounds, but I bet good money he was heavier than that. Seriously, go look at him. But he was a fine athlete too, making him one of the most fascinating players of his era.

His play was pretty good too, making the Pro Bowl twice and recording 14 forced fumbles during his time with Pittsburgh. He did it all: 19.5 sacks, 11 interceptions, and nearly 850 tackles. Kirkland made 124 career starts, including every game for six straight seasons.

Greene’s time in Pittsburgh was short-lived but it was as good as anyone in the history of the franchise. In just three seasons, he recorded 35.5 sacks with the Steelers. His start to sack ratio is the second-best in team history, only slightly trailing James Harrison.

Here are Greene sack totals in his three years.

Those 14 takedowns in ’94 led the NFL. Believe it or not, that wasn’t even his best three year total with a team. He had 41.5 sacks in 47 starts with the Carolina Panthers.

Greene was finally elected into the Hall of Fame this season and is still third on the all-time sack list with 160.

Nickel is one of the few players the common fan might remember about the Pre-Noll era. He was considered the best tight end before Heath Miller and emerged as one of the first true receiving threats in franchise history.

In an 11 year career, Nickel reeled in 329 passes for over 5100 yards and 37 touchdowns. He led the league with more than 24 yards per catch in 1949. When he retired in 1957, he was the franchise leader in basically every receiving category. Those records would stand for about 20 years until Lynn Swann and John Stallworth finally came along (excluding touchdowns, which Buddy Dial broke).

Nickel was named to the Pro Bowl three times and was one of the bright spots on some poor Steelers’ units back in the day.

Woodruff was a model of consistency. From 1982 to 1990, he picked off four or five passes all but once. There may have never been any super gaudy years, five interceptions was his career high, but rarely any lulls. He owns five defensive touchdowns to his name which at the time, tied him for the franchise record. It’s been surpassed by Rod Woodson’s six and matched by Carnell Lake, Troy Polamalu, and William Gay.

Woodruff also picked off two passes in the playoffs, both coming in the team’s Super Bowl run in 1979.

The legend of Rocky Bleier might be just as great as his actual play. And his play? Pretty darn good. Recovering from a severe foot injury suffered in the Vietnam War, Art Rooney Sr. kept a spot open for Bleier, who returned to football in 1971.

He helped pave the way for Franco Harris on their way to four Super Bowls but was an accomplished runner in his own right. In 1976, the duo became one of the few in league history to rush for 1000 yards apiece. That year, Bleier racked up 1036 yards, averaged 4.7 yards per carry, and hit paydirt five times.

In 1975, Bleier ran for a career-high 163 yards against the Green Bay Packers. Only once did Harris run for more, 179 two years later.

Today, Bleier serves as a motivational speaker. I had the pleasure of meeting him once when he came to Clarion and he was nice enough to grant my friend and me an interview. Definitely a genuine dude who still lights up when he talks about the Steelers.

Arguably the best free agency pickup in the modern era, “Potsie” wasn’t the biggest dude but played like one. He is by an interstellar margin the team’s leader in tackles with 1078. 141 of those came in 2003. Farrior made two Pro Bowls, 2004 and 2008, and was a guy who did it all for Pittsburgh. 30 sacks, 12 forced fumbles, and 11 interceptions. He was the team’s signal caller and one of their leaders.

Only Jack Ham has more starts than Farrior’s 154 and Farrior played five years with the New York Jets before joining Pittsburgh. A remarkable career and one of the less talked about in Steelers’ Nation.

I don’t mean to sound negative here but Gildon might be the least thought about sack leader of any team. It remains to be seen if he’s still holding that title after this year but Gildon racked up 77 during his time with Pittsburgh. He was dominant in the early 2000s, posting 13.5 and 12 sack totals in 2000 and 2001. Three times did the linebacker make his way over the double-digit sack mark.

He made 126 career starts, including each game for his last seven seasons in the Burgh. Not bad for a third round pick.

Andy Russell and Mansfield were basically the only two players Chuck Noll kept. He was the Steelers’ first great center in what’s now a laundry list of them. Officially, Mansfield made 111 career starts but that number wasn’t tracked until he was four years in with Pittsburgh.

He won two Super Bowls with Pittsburgh before passing the torch onto Mike Webster. He even drilled a pair of extra points in the 1976 playoffs after Roy Gerela hurt his groin.

White served as one of the Steel Curtain’s bookends, making 104 starts as a 4th round pick out of Texas A&M-Commerce, another one of the small school gems discovered by Bill Nunn and the Steelers.

White, nicknamed “Mad Dog,” is most famous for playing in Super Bowl IX with pneumonia. Despite losing nearly 20 pounds, White suited up to be apart of the team’s first Lombardi Trophy, recording a safety for the game’s first points.

“He played with a relentlessness that led us to four Super Bowl titles in the 1970s,” Dan Rooney said in a statement after White’s passing in 2008.

Regular season sacks weren’t recorded but per Pro Football Reference, they were for the playoffs. White had nine of those, including three apiece in 1975 and 1978.

Easily the most recognizable player before Noll, he was also the first – and for so long, the only – player to ever have his #70 retired. He never played for another team throughout his 14 year career and appeared in 173 games. I figure most of them were starts. He was simply a player who never missed a game.

Stautner made nine Pro Bowls and in 1958, was named to the AP’s All-Pro 1st Team. Several other outlets, including Sporting News, named him to their 1st-Team multiple times.

For a brief time, Stautner teamed up with Big Daddy Lipscomb to form one of the best interior duos in the league.