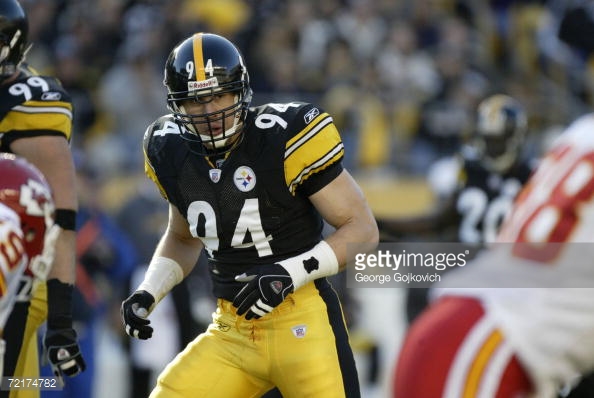 We’re going to continue our list by looking at the players ranked 59 through 50. Dave has the next grouping and we’ll switch off until we get to player number 20, when we’ll post just one at a time. If you are wild enough to create a list, post them below. It’s harder than it seems.

Kevin Colbert has never been a big player in free agency but he’s had some sneaky good pickups. Hartings is near the top of that list. Signed away from the Detroit Lions in 2001, Colbert’s second year on the job, he would go onto start 89 games for the Steelers at the pivot. In four of his six seasons, he went the distance and started all 16 games. He was part of the Steelers’ 2005 Super Bowl win, a year when the team finished in the top five in rushing yards.

There are so many great centers in Steelers’ lore so Hartings’ name is sometimes forgotten. But not here.

A low-key candidate for one of the best nicknames in team history. He made 87 starts and was a key cog in the team’s dynasty. He’s famous for his ability to pull on trap blocks, springing lanes for Franco Harris and Rocky Bleier. In three of those four Lombardi years, the Steelers’ rushing attack ranked 2nd in the league.

Another nail-on-the-head pickup from Colbert. Clark embodied the old-school Steelers in the modern era, dishing out big hit after big hit. His knockout shot of Willis McGahee in the 2008 AFC Championship game and decleater of Wes Welker are two of the most memorable.

Dave and I have pretty different rankings of Thomas but I think he’s an underrated guy who deserves to be in the top 60. He spent eight years in Pittsburgh, spanning all four Super Bowls. In 88 starts, he picked off 19 passes. That’s just tied for 15th in team history but he came up with some big plays in the playoffs. His INT against the Oakland Raiders in 1974 ensured the Steelers would go to their first Super Bowl. He had a 35 yard pick against Dallas in Super Bowl X, which actually set up the famous Roy Gerela miss, Jack Lambert-Cliff Harris slam.

In all, he made 12 career playoff starts. He made one Pro Bowl, elected in 1976. His career high five picks came two years earlier.

Brown didn’t have a particularly long career but it was a strong one. 49 starts. 31 sacks. That’s a better ratio than guys like Jason Gildon, Joey Porter, and Greg Lloyd. His best year came in an All-Pro 1996 season where he recorded 13 sacks, forced three fumbles, and two interceptions.

If you have ever looked at Pro Football Reference’s Approximate Value, that ’96 season spit out a value of 17. That is higher than what Ben Roethlisberger, Terry Bradshaw, Joe Greene, Hines Ward, or Mike Webster ever had in any one year.

Brown would go on to have a long career with the Seattle Seahawks and then circle back to the Burgh for one short stint in 2006, where he would go onto have one final sack.

Brown is one of the few in team history to make a mid-career switch from tight end to offensive tackle. Beginning in 1977, Brown would go on to start 85 games for the Black and Gold. He played 167 games in the NFL, all with Pittsburgh. As a tight end, he scored one of the two touchdowns in the first Super Bowl victory over the Minnesota Vikings, a four yard snag from Bradshaw.

Dial played just five years with Pittsburgh but made each one count. A potent deep threat, he twice led the league in yards per catch. 24.3 yards in 1960 and 21.6 in 1963. He was a touchdown machine, 42 scores in 219 catches. That 5.2 receptions per touchdown mark is the second best in team history or anyone with 100+ grabs. Only Jim Smith’s is better.

When Dial went to Dallas after 1963, he held the team record in touchdowns and was only behind Elbie Nickel in yards.

There aren’t a ton of household names at tackle in team history but Tunch is near the tops. He reeled off 143 starts which, and correct me if I’m wrong Steelers’ Nation, is the most by a tackle in franchise history. He made back-to-back Pro Bowls in 1988 and 1989. Today, you know him as the color commentator for Steelers’ radio games and to me, a knowledgeable and colorful analyst.

Another linemen to round out the Top 50. Davis went out on top, winning all four rings and then retiring after 1979. He made 113 career starts and like Mullins, help lead a potent rushing attack. He was a fixture opposite Mullins at the left guard spot.