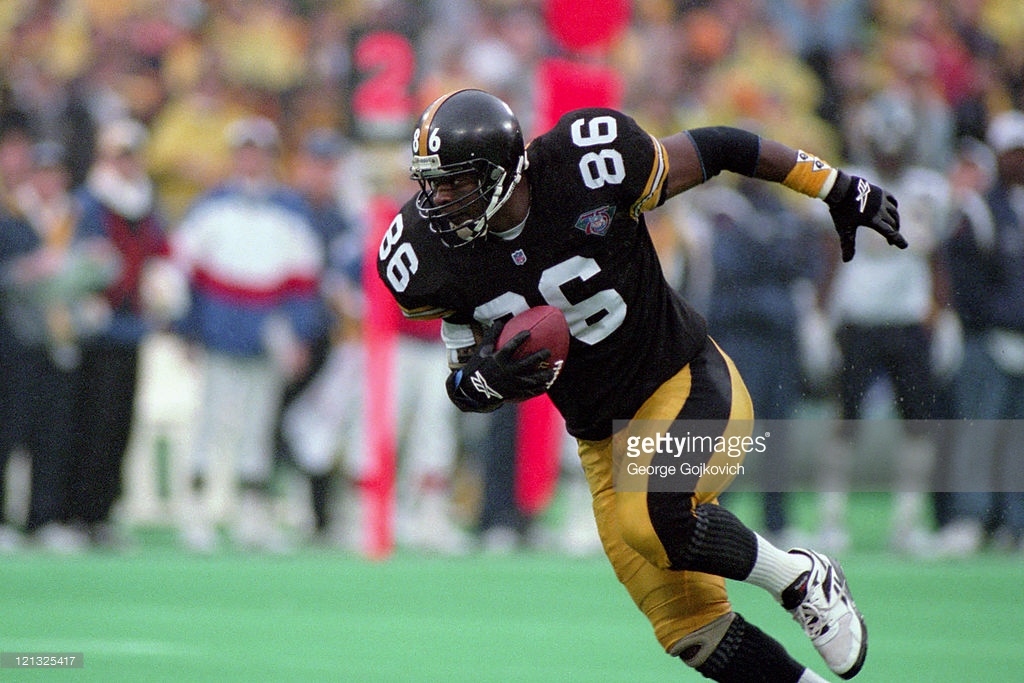 I’m going to kick things off with players 100 through 90. Dave has the next grouping and we’ll switch off until we get to player number 20, when we’ll post just one at a time. If you are wild enough to create a list, post them below. It’s harder than it seems.

Nickerson’s best football came in his seven years with the Tampa Bay Buccaneers, where he made all five of his Pro Bowls and was named to the All-Pro team twice. That doesn’t influence these rankings nor does it undercut the success this 5th round selection had in Pittsburgh. He started 61 games, racking up 9.5 sacks and 426 tackles. He also forced five fumbles.

He was another solid value pick, a 4th rounder out of Mississippi State. In his football career, spent entirely with Pittsburgh, Henry started 81 games. He had 14.5 career sacks, including a season-best 4.5 in 1997, followed up with another four the next year. His career was never spectacular, I just gave you the highlights, but he was a steady figure on some pretty good teams.

Start 81 games and win a Super Bowl? That’s good enough of a resume to place Pinney on the list, who started 11 regular season games at right tackle for Pittsburgh in 1978, plus their Super Bowl win over Dallas. An underrated player for an underrated offensive line which included: Jon Kolb, Moon Mullins, Sam Davis, and Mike Webster.

Though his career has spanned just over 50 games so far, DeCastro is already one of the best guards in franchise history. Easily top five, arguably top three. He’s made a Pro Bowl and All-Pro team, a crazy athletic player who has made the Steelers’ gap schemes as successful as they were under Alan Faneca. By the time his career is over, he’ll be much higher on this list. Could be as high as top 25. I’m excited to find out.

Widely regarded as the best punter in team history, an assessment I don’t agree with, but I recognize he was certainly around for the longest. He routinely had the Steelers top three in the league in average though was never able to get over the hump and lead the league with Pittsburgh (he did with Minnesota his rookie season).

Near the twilight of his career, he picked up two Super Bowl rings with the team. He also made one Pro Bowl, coming in 1969, shining in one of the final years of team mediocrity.

His career didn’t start in Pittsburgh, it was Minnesota, but he was a solid free agent pickup, nabbed two years before Kevin Colbert started making decisions. He spent six years in the Burgh, making 92 starts to go with 19 interceptions. His 362 tackles, including 93 total in his first season here, makes him a true Steelers’ corner.

Football’s version of a sparkler. Didn’t burn long and wasn’t the brightest but fun for the kids, doing all the stuff you did in your backyard but instead, on the game’s biggest stage.  He was an electric returner, threw passes, ran the football. His career, of course, encapsulated by his Super Bowl XL laser to Hines Ward. His four career punt return touchdowns tie for the franchise league while his attempts rank second only to Rod Woodson.

His Steelers’ career was not particularity long, only five years before spending time with the Baltimore Ravens, Miami Dolphins, and New York Jets. But they were five good ones. He made two Pro Bowls, ’93 and ’94, recording 109 passes for well over 1500 yards and nine touchdowns. Had he been around longer, he’d certainly rank higher.

His career will be remembered by two cities, Cincinnati and Pittsburgh, for vastly different consequences. He accidentally injured Carson Palmer in the 2005 Wild Card game, helping Pittsburgh win and sending the Bengals packing again.

Beyond that, he made 94 starts for the Black and Gold and still ranks 22nd in team history with 20.5 sacks in a relatively short span. He exploded in 2003, logging 8 sacks and forcing one fumble. Also, if you need to buy a vowel, he’s your dude.

Big Play Willie Gay. That’s what we call him now but early in his career, most fans wanted to call him names that’d make your Grandma blush.

He will never be thought of a lockdown corner the way Mel Blount and Ike Taylor were, because he wasn’t, but he aged like a fine wine. Since his Arizona sabbatical, he’s picked off seven passes and returned four for touchdowns. He’s got five in his career, trying him with Rod Woodson for most all time. Gay’s been a force against the run, a team leader, and all-around good guy off the field.

Gerela’s Gorillas. That’s how I’ll remember a player I never actually watched kick. He served as the starting kicker for three of the 70s four rings and still ranks third in team history in makes (146) and points (731).

He’s lower on this list for a shaky playoff record, even considering the era. He made just 57.7% of his kicks in the playoffs, down from his career average of over 64%. It’s even worse when you look at just AFC Title games and Super Bowls, a 7/17 blemish (41.1%). Of course, his miss and ensuing Jack Lambert takedown of Cliff Harris may very well won Pittsburgh a Super Bowl. So maybe we should call things a draw.