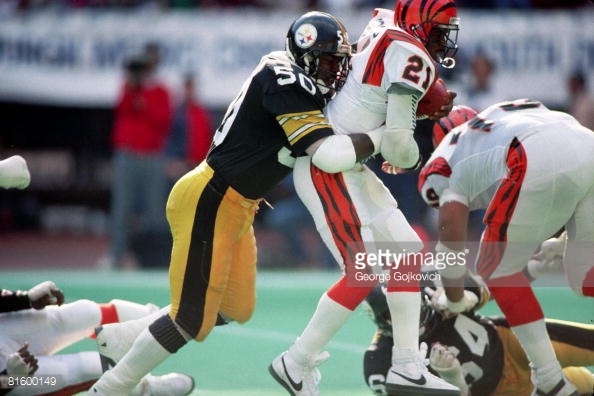 We’re going to continue our list by looking at the players ranked 79 through 70. Dave has the next grouping and we’ll switch off until we get to player number 20, when we’ll post just one at a time. If you are wild enough to create a list, post them below. It’s harder than it seems.

He didn’t have a long career or a particularly great one. But he was the best for one insane season and having a record-setting year is worthy of induction onto this list. In 1992, he touched the ball 426 times, 390 on the ground, and finished second to only Emmitt Smith with 1690 yards rushing. His 11 rushing touchdowns finished fourth in the NFL. The yards are still a Steelers single season record. Only one player in franchise history – Jerome Bettis in 1997 – has even touched the 1500 yard milestone.

The rest of his career was rather unremarkable on the field. Never more than 851 yards rushing, though he did make another Pro Bowl in 1993 after finding the end zone eight times. But at his best, Foster had numbers no other back in team history has accomplished.

Cunningham was basically the opposite of Foster. Never a remarkably gaudy year but a steady string of them. He played in 118 games, starting 80, and caught 202 career passes for 20 touchdowns. He was apart of the 79 Super Bowl champs (he only played in six games in 1978), catching a then game-tying TD against the Houston Oilers in the AFC Title game.

Hoak never had the luxury of playing on a notably good team, swept up in Chuck Noll’s roster overhaul. When Hoak’s Steelers’ career was over, he was the second leading rusher in team history, amassing just under 4000 career yards.

His best season came in 1968, averaging an impressive 4.9 yards per carry. His 858 yards on the ground was good for 4th in the league while his YPC earned bronze.

Though no actual points awarded in this study, he earns Steelers Depot brownie points (redeemable nowhere!) for being a Pennsylvania lifer and becoming the long-term running backs coach for the team.

The downside is, still understanding the teams he played on (one season with a winning record), is the poor career mark of 3.5 yards per carry. Not ideal.

We seem to be flip-flopping between bright and dull stars. The ones that flash for an instant, quickly burning up, and the ones who glow forever. Jefferson is of the former, an off the field issue who Noll quickly discarded of. That’s too bad because Jefferson was a phenomenal receiver.

In just five years with the Steelers, he racked up over 3600 yards receiving, found the end zone 29 times, and averaged 18.4 yards per catch. At the time, those first two marks were 4th in Steelers’ history. In 1966, he paced the league with over 24 yards per grab and two years later, led the league with 1074 yards receiving. During his Pittsburgh career, he made two Pro Bowls and one All-Pro team. He was the first ever team MVP, introduced by Noll in 1969.

Jefferson’s career would span one year in Baltimore and another six in Washington.

Had Smith not dealt with serious back issues, he would’ve easily been another 10-15 spots higher on this list. In all, he started 108 games with Pittsburgh but only once pulled off back-to-back 16 game seasons. When healthy, he was as solid as they come on the left side, serving as Ben Roethlisberger’s blindside protector in Super Bowl XL. He made one Pro Bowl, the year before.

This is a personal favorite of mine. A name lost to an era and an ill-tempered coach. Buddy Parker’s power-move backfired on him when he was hired in 1957. An excerpt from Dan Rooney’s autobiography.

“Buddy decided to cut talented running back Lynn Chandnois, just to prove no one was indispensable. Even Parker, however, regretted this hasty decision after viewing Chandnois’ performance in game film.”

That’s because Chandnois is still arguably the greatest returner in team history. His 29.6 career kick return average blows everyone else out of the water – the next closest is three yards behind. He led the league in average in 1952, over 35 yards per chance, and the league in all-purpose years in 1953. Both seasons earned him a Pro Bowl bid.

That career average is still third in NFL history. He trails only the immortal Gale Sayers and the anything-but-immortal Cordarrelle Patterson. Chandnois once returned an opening kickoff 97 yards for a score, had it called back, and followed up with a 91 yard score on the re-kick.

He was a true triple threat, running, catching, returning. Heck, he even threw two touchdowns in 1951 when the Steelers still ran the single wing offense, the last in the NFL to hold onto it.

Truly one of the most underrated players in franchise history.

Little’s presence was as steady as anything during the rough 80s and early 90s. He started 125 games, played in 179, and made a Pro Bowl in 1990. Tackles were not officially tracked during his time but you can bet he had a ton. Officially, he’s credited with 11 fumble recoveries, 10 interceptions, and nine sacks. He’s well-liked in the OCD club.

He was also admired by his teammates, voted co-MVP with Rod Woodson in 1988. Little called Pittsburgh home for his entire career.

Jackson wasn’t a Pittsburgh lifer but it sure felt like it. He started 130 games in 10 years, an underrated ironman who started all 16 games six times. He was never recognized with a Pro Bowl selection but paved the way for Foster during his record-breaking year and Bettis’ runner-up showing five years after. Quietly excellent, the way all linemen aspire to be.

Williams was one of the early true nose tackles in Steelers’ history. And we was a good one. A career of 24.5 sacks, still 17th all-time, is nothing to sneeze at. He led some impressive run defenses in 1990 and 1991 and again in 1995, when the team finished in the top six in yards per carry allowed. In ’95, their Super Bowl run year, they allowed the second fewest yards rushing.

There are so many elite linebackers in franchise history that it’s easy to lose a guy like Merriweather. It’s true he doesn’t share the same legacy of the Jack Lambert’s of the world. Though he didn’t have a lengthy career, just six seasons, he was fantastic. It’s highlighted by his 15 sack campaign in 1984. Only James Harrison (16) has more in a single season. Not Greg Lloyd. Not Joey Porter. Merriweather.