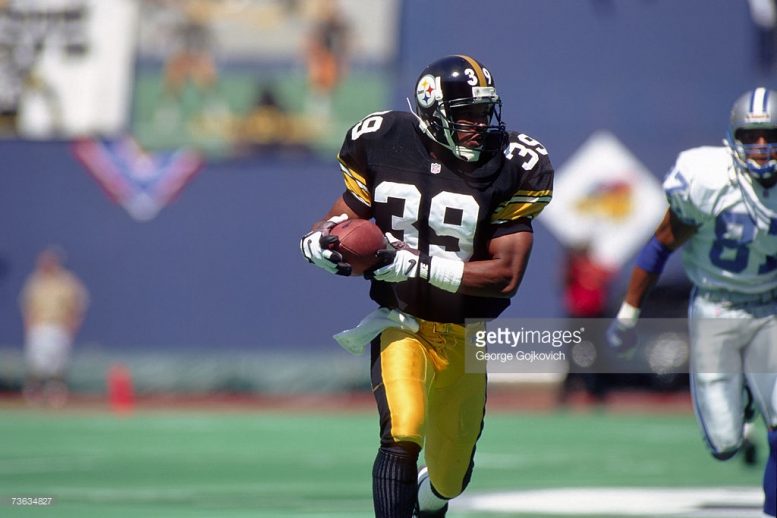 In the spirit of the offseason, Alex Kozora and I have undertaken the daunting task of ranking the top 100 Pittsburgh Steelers players in the history of the franchise. And we mean the complete history – 1933 to today. Alex and I first came up with our own lists and then worked together to come up with one “master” group. So you’ll see that one reflected below each player ranking, with a quick side note of where each player was at in our personal rankings. That way, you all have something to be outraged over.

49. Clark Haggans/OLB (2000-2007) – Selected by the Steelers in the fifth-round of the 2000 NFL Draft out of Colorado State, Haggans played in Pittsburgh for 8 seasons. The outside linebacker registered 32.5 total sacks during his Pittsburgh career and his single-season high of 9 came in 2005 which ultimately ended with the Steelers winning the Super Bowl that year. While he only started 61 total regular season games with the Steelers, Haggans played in a total of 107 while in Pittsburgh.

48. John Henry Johnson/FB (1960-1965) – Originally selected in the second round of the 1953 NFL draft by the Steelers, Johnson decided to start his professional football career by playing one season in Canada with the Calgary Stampeders. After that 1953 season, he played the next six seasons with the San Francisco 49ers and the Detroit Lions. Steelers head coach Buddy Parker traded for Johnson in 1960 and it was in Pittsburgh where the fullback had his most productive seasons. In 1962, Johnson rushed for 1,141 yards to become the first player in Steelers history to crack 1,000 in a season. Two years later, he did it again, with 1,048 yards. During his six seasons with the Steelers, Johnson rushed for 4,383 yards, and his rushing yardage in 1962 was a team record until Franco Harris broke it in 1975. Johnson’s four Pro Bowl selections came while he played for the Steelers and he is still currently ranked fourth on the all-time Steelers rushing list behind only Harris, Jerome Bettis, and Willie Parker. In 1987, he was selected to the Pro Football Hall of Fame.

47. Glen Edwards/S (1971-1977) – Edwards, who joined the Steelers in 1971 as an undrafted free agent, became a full-time starter with the team as a free safety in 1973. In 1974 won the team MVP award and went on to win two Super Bowl championship rings in Pittsburgh with two Pro Bowl appearances. He registered 25 total interceptions while with the Steelers and played a total of 89 games.

46. Ike Taylor/CB (2003-2014) – Drafted by the Steelers in the fourth round of the 2003 NFL Draft out of Louisiana-Lafayette, Taylor played 12 seasons in Pittsburgh as a cornerback. While not blessed with great hands, Taylor still managed to record 14 regular-season interceptions during his long career and 3 more in the playoffs. After a bumpy start to his career, which included him being one of the team’s best special teams players, Taylor ultimately managed to stick as a defensive starter. Always in prime physical condition, Taylor at one point played in 135 consecutive games during his Steelers career. He was part of two Super Bowl championship teams and also played in another on the losing side. He played in 174 regular-season games as a member of the Steelers.

45. Keith Willis/DE (1982-1991) – Originally signed as an undrafted free agent by the Steelers in 1982, Willis went on to play nine seasons in Pittsburgh. He ended his Steelers career with 59 sacks, 14 of which came in 1983. He played in 126 games with the Steelers and started 87 of those contests. Willis is still ranked fourth on the Steelers all-time sack leasers list behind only Jason Gildon, James Harrison, and Joey Porter.

44. Lawrence Timmons/ILB (2007-) – Originally drafted in the first-round of the 2007 NFL Draft out of Florida State, Timmons has already played in 142 regular season games and registered 33 total sacks during his time in Pittsburgh. A one-time Pro Bowler, Timmons continues to remain the core of the Steelers defense entering the 2016 season. He was a main part of the team that won the Super Bowl during the 2008 season. He should surpass 900 total tackles in 2016 and is consistently among the team’s leaders in that statistical category every season in addition to total defensive snaps played. In his last five seasons, Timmons hasn’t missed a single Steelers game.

43. Louis Lipps/WR (1984-1991) – Originally drafted by the Steelers in the first-round of the 1984 NFL Draft out of Southern Mississippi, Lipps caught 358 passes for 6,018 yards and 39 touchdowns during his eight seasons in Pittsburgh. He is still currently ranked fifth-overall on the Steelers all-time list when it comes to receptions and receiving yardage. He was named the AP Offensive Rookie of the Year in 1984 and voted to the Pro Bowl twice during his career in addition to being named an All-Pro twice. In 1989 he was named the Steelers MVP. In the two playoff games that Lipps played in during his career in Pittsburgh he caught 14 passes for 184 yards and 2 touchdowns.

42. Gary Anderson/K (1982-1994) – Anderson, who was originally drafted by the Buffalo Bills in the seventh-round of the 1982 NFL Draft, was signed by the Steelers as a free agent after being released prior to the start of his rookie season. He spent a total of 13 seasons in Pittsburgh and connected on 309 of 395 regular-season field goal attempts during that span while only missing 4 of his 420 extra point attempts. His 1,343 total points scored while in Pittsburgh still has him ranked tops on the franchise’s all-time list. He was named the Steelers MVP in 1983 and named to two Pro Bowls while in Pittsburgh.

41. Jon Kolb/T (1969-1981) – Kolb, an All-American center while in college at Oklahoma State, was drafted by the Steelers in the third-round of the 1969 NFL Draft and played for them from 1969-1981. Kolb played tackle in 177 games for the Steelers, and was an integral part of four Super Bowl championships during his career in Pittsburgh. A First-Team All-Pro in 1979, Kolb was named to the Steelers All-Time Team as a part of the franchise’s 50th season celebration in 1982.