– Has natural body type that makes him difficult to get taken to the ground, especially by smaller defensive backs
– Predictably, at his best when running downhill and is capable of pushing the pile, creating yards after contact
– Moments, though rare, of a natural runner, showcasing quick feet and an ability to get skinny through the hole
– Fullback-like experience in team’s option offense, competent lead blocker who creates pop on contact and does an above average job sticking and driving defenders
– Size gives him an advantage in pass protection, willing to stay square to his blocks and shows bend
– Limited use as a receiver but shows soft hands
– Wore many hats in college, experience as a runner and blocker, moved all over the formation
– NFL bloodlines
– Fairly productive career

– Slow, lethargic runner, who timed terribly in pre-draft workouts
– Lacks any initial burst or open field speed and too easily caught him behind
– Doesn’t have the foot speed to reach the perimeter, almost painful to watch, and profiles as a one-dimensional, between the tackles runner
– Schematically limited to a power scheme, can’t exist in a zone scheme that asks him to reach the edge and bend runs back
– Change of direction is poor and takes too many false steps
– Doesn’t always run like the power back you’d expect
– Runs way too tall, exposes his upper body, and one reason why he isn’t the power back he should be
– No true position in the NFL, classic jack-of-all-trades, master-of-none type
– Did not receive many receiving opportunities and has a limited body of work

– Two years of significant playing time at running back
– 2014: 971 yards, 5.0 YPC 14 TDs, third in conference in rushing touchdowns
– 14 touchdowns all came over final eight games, scored in seven of them
– Career: 397 carries, 2095 yards, 23 TDs
– Nine career receptions, only two in 2014
– Came to school as a linebacker, switched to running back to start the 2012 season
– Linebacker/running back in high school, defensive MVP junior year, offensive MVP senior year
– Suffered a torn Achilles in 2010 after five games, forced him to redshirt in 2011
– Older brother is Byron Stingily, offensive lineman for the Titans
– Three-star recruit out of high school, had offers from Eastern Michigan and Illinois St

Stingily was one of two players to receive a contract at the Steelers’ rookie minicamp, hoping to follow Terence Garvin on the road from tryout to roster spot.

His size alone will get some fan’s excited. 240 pound running backs aren’t commonplace. At his best, he does run to that size. Downhill runner who can be a handful to bring down. Takes a couple defenders across the first down marker in this 2013 contest against Toledo.

I’m sure the team admired his blocking experience and it’s fair to think the team is going to look at him more as a fullback than a runner. In the Huskies’ option offense, there were ample lead blocking opportunities for a 240+ back.

Washes the unblocked defensive end, driving him out of the play to open a lane for the quarterback.

Play results in a sack but through no fault of Stingily. Square in pass protection and sticks for the duration of the play.

For what it’s worth, although he only has a handful of official receptions in his career, it’s likely there were some throws which were ultimately counted as laterals due to the nature of the offense.

It’s good he has gotten that work as a blocker because it’s highly unlikely he’ll ever be anything as a runner. He is slow. NFL Draft Scout has him listed at turning in a 4.95 at his Pro Day though the school’s site lists him at a 4.82. Regardless, the tape doesn’t lie. He can’t reach the edge, let alone be a threat in the open field.

Quinten Rollins, docked for his lack of speed, has no trouble catching Stingily down from behind. On the plus side, he shows some foot quickness on his jump cut.

Stingily attempts to bounce this run on 4th and 1. No speed to reach the edge and he’s easily stopped as the Huskies’ turn the ball over on downs.

There isn’t any burst to his game. One-speed runner and that speed is mighty slow.

His running style leaves a lot to be desired. Way too upright, leaving too much of his midsection exposed. Going to sap him of power because defenders are going to get under him easily. 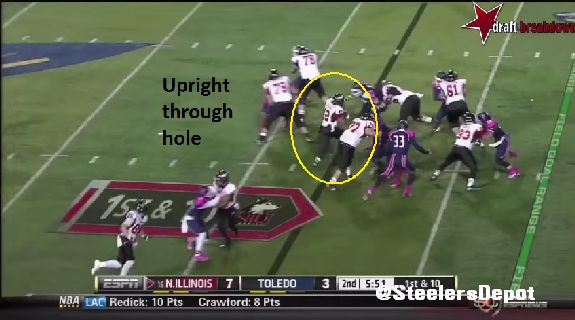 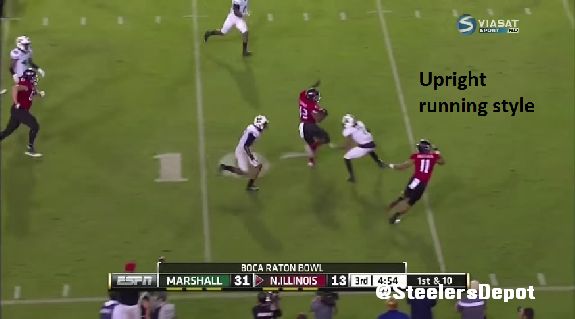 You’ll see it in action in the GIF below. Defensive back gets under his pads and pops him pretty good.

Evaluating him as a fullback, it’s going to be nearly impossible to make the roster with Will Johnson’s spot seemingly secure. Though there are a couple aspects of Stingily’s game I like, and his versatility is always a nice bonus, speed is a must at the next level. That’s what Johnson had, running a 4.69 at his Pro Day. That isn’t what Stingily has, leading me to wonder how exactly how he could contribute to the team.

He’ll make it to camp, probably run over a fourth string safety in the second preseason game, eliciting some cheers from the crowd, but ultimately, lacks staying power in the league.