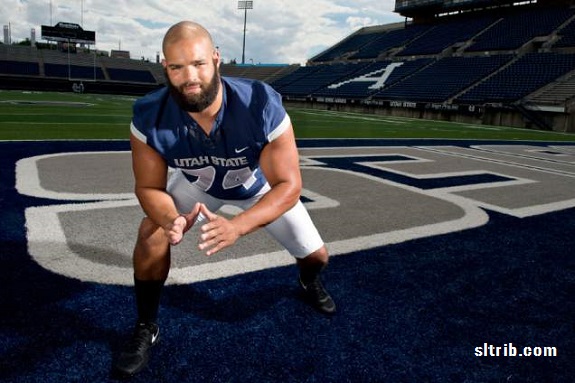 Continuing our post-draft evaluations, we’re diving into the Pittsburgh Steelers undrafted free agent pool. We’ll do full breakdowns of the players that have enough tape available. After a brief break, we’re looking back towards the offensive lineman today. Evaluating Utah State’s Kevin Whimpey.

– NFL looking size and though length doesn’t appear great, is adequate enough
– Tremendous upper body strength, matches workout numbers
– Shows pop upon contact as a run blocker and does a tremendous job sticking and holding his blocks
– Classic people move who dwarfs smaller defenders
– Gets good leg drive and looks to finish plays, keeps his lower half under him as a run blocker
– Good football IQ, active eyes and appears able to recognize and pick up stunts/twists
– Absorbs and catches bull rushes well, upper body strength to rebuff defenders
– Lots of starting experience

– Limited athlete who doesn’t show much of a burst
– Average feet and prone to getting beat laterally by speed rushes
– Loses his base upon contact in pass protection, too much forward lean and is top heavy, prone to doubling over/flatback
– Lacks the lateral movement to mirror effectively
– Will have to make position switch at the next level, move from tackle to guard
– Only saw work at one position, left tackle, will make the transition that much more difficult
– Older than typical prospect due to mission trips, will be 25 by training camp

– 40 game starter, all at left tackle for the Aggies
– First-Team All Mountain West in 2014
– 144 career knockdowns, including 64 senior season
– 39 reps of 225 at his Pro Day, more than anyone at the Combine
– Transferred to Utah State after one year at Idaho St
– Played defensive end in high school and Idaho St, made switch to offensive line in 2011
– Played with twin brother at Utah State before he suffered a career-ending knee injury
– Married with a wife and daughter
– Lettered in four sports throughout high school, including wrestling

Sometimes, what you perceive about a prospect based on his measurable and what the tape shows are opposites. It’s why you always check the film and see if it meshes. The times it doesn’t are the moments that remind you how valuable it is.

However, that isn’t the case with Kevin Whimpey. Numbers indicate he’s strong and so does the tape. No one will argue this guy lacks NFL strength. His 39 reps on the bench press were two more than Ereck Flowers’ 37 at the Combine to pace the group.

He’s a nod to the throwback. Upper body allows him to stick to his blocks, dwarfing and driving out those considerably smaller.

Didn’t see a whole lot of opportunities but Whimpey looks to have a good head on his shoulders. Picks up the tackle in this T/E stunt well. Even if he is doubling over, it’s the IQ I like to see from a college kid.

It’s easy to sum his tape up. Above average run blocker, below average pass protector. Average feet who doesn’t move well laterally. Leans forward on contact and will double-over against edge rushes.

Despite a good initial base, Whimpey doubles-over and allows the sack.

Similar situation against Tennessee. Simply lacks the feet to seal the edge.

Knowing all that, his only shot in the NFL will come at guard. Ignore the “tackle” designation the team has given him. Whimpey can excel in a booth but will be exposed in space.

The offensive line is awfully crowded but his strength gives him a defining trait that fellow rookies Reese Dismukes and Collin Rahrig – and even BJ Finney – don’t really have. But the lack of versatility is going to hinder his chances of landing on the practice squad. Playing left tackle all your life, likely being asked to guard, and then ideally, learning another position, is a tall task. How he is used is something I’ll be keeping an eye on in camp.

But is there talent? Sure. There’s reason to be intrigued.