– Strong upper body who sticks to his blocks in both phases
– Does a nice job absorbing rushes when playing with proper technique and has the ability to seal the edge and ride the defender upfield when he locks on
– Shows leg drive as a run blocker and generates a serviceable push
– Some athleticism and like his initial burst out of his stance when asked to reach the second level
– Plays with the proper demeanor and finishes his blocks
– Gets arms extended in both phases
– Shows proper technique initially out of his stance as a pass protector, exhibits knee bend and ability to sink his hips
– Smart player who routinely picked up stunts without issue
– Tons of starting experience and a durable player who never missed a game

– Size isn’t special, on the short and light side for the position
– Feet go dead on punch in pass protection, leads him to getting beat around the edge
– Problem compounded by showing flatback on contact, must clean himself up technically, a segmented pass blocker
– Struggles getting in front of wide technique rushers
– Needs to play with tighter hands, vulnerable to exposing his chest and letting defenders get into his pads
– Likely lacks feet to stay at left tackle in the NFL, not a natural athlete laterally
– Experience at only one position
– May lack a defining trait
– Never earned any major conference accolades

– Three-year starter, all at left tackle
– Pac-12 Honorable Mention each of the last two years
– First-team All-Conference and All-State senior season of high school
– Four year starter in HS
– Had interest from Hawai’i and Stanford

Hatchie shows some good marks in both phases. Perhaps a little more well-rounded than Kevin Whimpey, the tackle we profiled yesterday. Whimpey is definitely going to have to move to guard and though Hatchie may follow suit, he has enough movement skills to be a right tackle.

He doesn’t have the strength Whimpey showed on tape but generates a good push in the run game.

He’ll be the left tackle in all the clips.

Like the arm extension and ability to stick to the defender in pass protection against Oregon.

Active eyes and didn’t miss a stunt in the three games I watched.

When his legs are pumping, he shows decent enough feet to, as I mentioned, remain a tackle candidate in the NFL though more likely on the right side than the left. But his legs often go dead, he shows flatback on his punch, and he has trouble sealing the edge.

You can see it briefly in the clip below. Hatchie does recover and doesn’t allow the pressure but there’s the tendency to double-over, shoulders over toes, on contact.

As I’ll show in the pictures below, his feet go dead on contact. Initial slide isn’t bad but things start getting ugly after that. 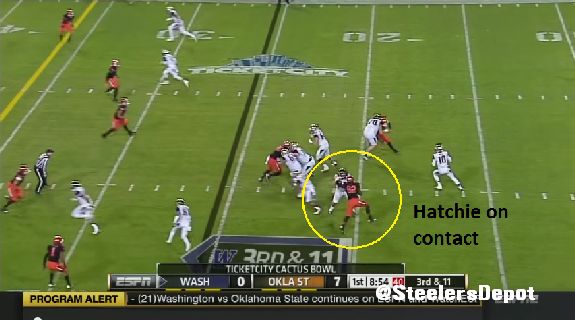 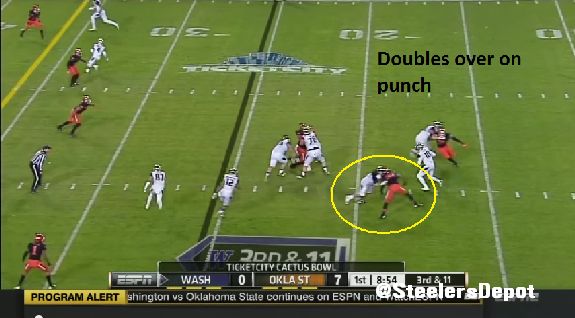 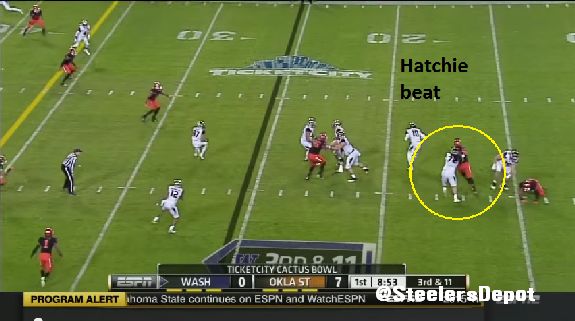 Third and eight and Hatchie’s matched up against a wide rusher. Lacks the feet to stay square and the end beats him, applying pressure and helping to create the incompletion. 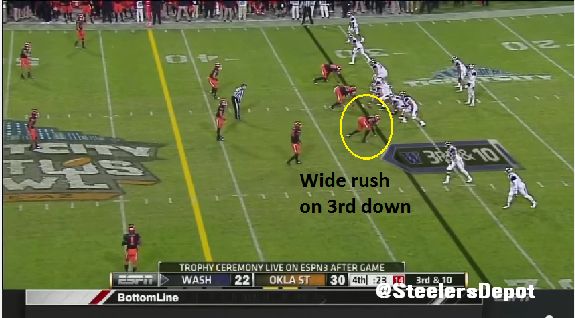 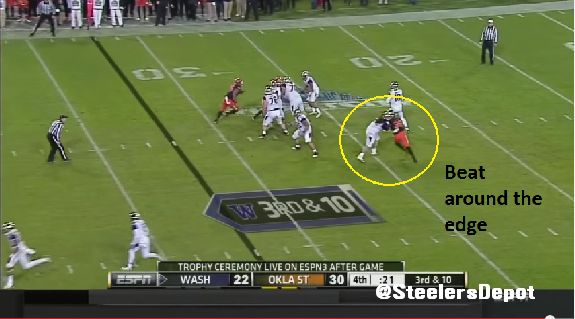 He wasn’t exactly facing a “bendy” pass rusher in either of those situations. An NFL tackle is going to, at the very least, get into his ribs and shove him upfield.

Some of these issues are technical. Bad habits formed over time. They can be worked on and it’s the reason why he has the potential to be a tackle. But a project who doesn’t show any special enough traits to warrant serious consideration onto the 53 man roster year one.

I haven’t looked at Miles Dieffenbach yet, Chris Nicolaou will be doing that report, but I’ve broken down all the other offensive lineman. If, today, you forced me to rank them, this would be my order