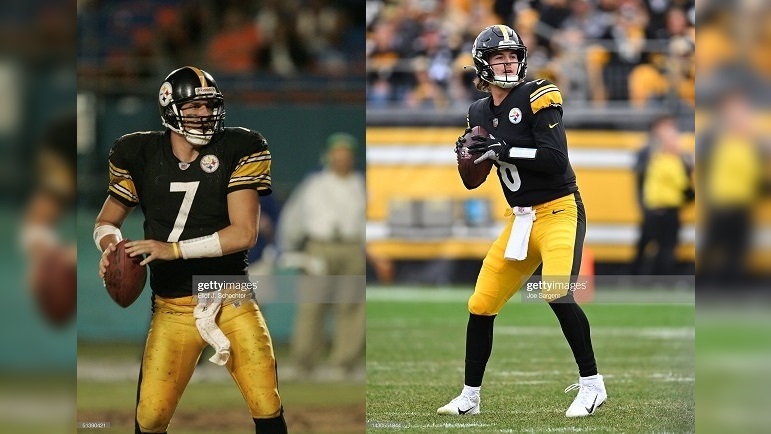 Just this week, former Pittsburgh Steelers quarterback Ben Roethlisberger spoke highly about rookie quarterback Kenny Pickett, saying “The sky is the limit,” on his podcast. As that news made its was around Steelers’ Nation, it also made its way to Pickett.

In an article written by Mark Kaboly of The Athletic, Pickett went into detail of how much it meant to hear that praise from Roethlisberger and how he grew up watching the Steelers’ #7.

“It means the world to me to earn his respect,” Pickett told Kaboly. “My best friend is a Steelers fan and I would go to his house and watch [Roethlisberger] and the Steelers play forever. I have been watching him for a while.”

Pickett, born in 1998, was only six years old when Roethlisberger took his first snap donning the Black and Gold, and is likely the only Steelers quarterback he remembers. Now, Pickett is tasked with filling the shoes of a legend. It is something that will take some time.

While Pickett has improved a lot this season already, something that is very encouraging, he still has areas to grow. He has to not bail out of the pocket so early and has to be a bit more accurate on deep balls. These are things that are not too hard to fix, putting both the Steelers and Pickett in a good spot going into next year.

One thing Pickett mentioned to Kaboly is that he would like the opportunity to get closer with Roethlisberger and learn from him.

“In the offseason, I would love to be able to connect with him and continue to pick his brain and use him as a resource.”

While the two do text, during the season it is a lot harder to keep in contact with many people due to how fast everything is moving with practices, meetings, and interviews. However, I am sure this offseason, the two Steelers quarterbacks will connect and build a close relationship.

Having a former Steelers quarterback mentor Pickett is huge. The Pittsburgh media can be brutal at times, but having someone who navigated it for 18 years sometimes well and sometimes not so well, will be helpful for Pickett. While he was a quarterback at Pitt four five years, the way the media treats the Pitt Panthers and the Steelers is very different. Having someone who dealt with that for 18 years will certainly be helpful.

As Pickett’s rookie season comes to a close, it looks to be ending on a high note. Hopefully in the offseason he and Roethlisberger can spend some time together and Pickett can come into the season with some knowledge of a future Hall-of-Famer. Not many other quarterbacks around the league can say they have that.