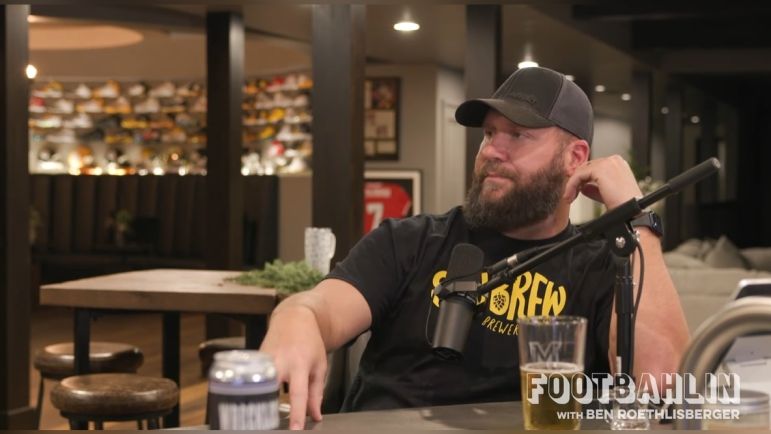 Since the last time Ben Roethlisberger did his podcast Footbahlin, Pittsburgh Steelers rookie quarterback Kenny Pickett led two game-winning drives to keep the Steelers’ playoff hopes alive. Now having played in 12 games, this season (11 if you don’t want to count the first Baltimore Ravens game) Pickett has put a lot of tape out there for people to start coming to conclusions about his play.

One of those who has come to a conclusion is Roethlisberger. On his podcast today, Roethlisberger talked about how Pickett has played really well, even better than he initially thought he would.

“I severely, in my opinion, underestimated Kenny,” said Roethlisberger. “I think he throws the ball better than I thought, he runs way better than I expected and thought, his decision making is really really good, his leadership, his toughness, [he has] just enough of an edge to him it looks like. So I apologize, not that I made this vocal to anybody else, but in my own head. Kenny, keep doing what you’re doing because you are leading this team and becoming the guy that everyone was hoping you would be. I think the sky is the limit for him, really.”

I can imagine a lot of people were excited to hear Roethlisberger’s thoughts on the man who was drafted to fill his large shoes, and we finally got them. Roethlisberger, like many, did not think Pickett would light the world on fire. Many people thought Pickett did not have the best physical tools to be a very good quarterback, especially in the current NFL with superhuman athlete quarterbacks like Lamar Jackson, Patrick Mahomes, and Josh Allen.

However, just like he has always done, Pickett has shown up and proved people wrong. On the season Pickett has six touchdown passes, nine interceptions, and has thrown for 2,209 yards. While those interception numbers are high, eight of them came before the bye week. Since Pickett has come back from the bye week and has gotten more comfortable, his play has improved and he has cut the turnovers down. Since the bye week, Pickett has led four game-winning drives, showing he has the clutch gene in him like his predecessor. He’s the first rookie to ever lead back-to-back game-winning drives, two must-win games for the Steelers.

Roethlisberger did say that there is still more to unlock with Pickett, and that what is more important than this year is how he looks in his second or third year.

“Now let’s see what year two, year three look like. That’ll be the key, in my opinion, like I said to really take the next step. But he is all that and even more than I thought he was going to be.”

While a bad rookie year or even a good rookie year is important, Roethlisberger is right about the second and third years being even more important. Once a quarterback gets to year two or three, you normally have an idea of what he is going to be. A recent quarterback who took an insane second and third-year leap is Josh Allen. Allen’s first year was rough, throwing 10 touchdowns and 12 interceptions. His sophomore NFL season he threw 20 touchdowns and only nine interceptions leading the Buffalo Bills to the playoffs. His third year was insane. Allen threw 37 touchdowns and only 10 interceptions en route to his first Pro Bowl appearance. If you just judged Allen on what he did his rookie year you would have thought he was just another first-round quarterback bust.

Now, I don’t want to compare the two or try and say Pickett will be Allen. However, it does back up Roethlisberger’s point that the second and third year of a quarterback is more important than the rookie year. Now, Pickett is on an upward trajectory, and hopefully, he can take that upward trajectory and become even better next year, cementing himself as Pittsburgh’s franchise guy.

“He’s playing with confidence right now. It’s showing and it’s oozing out of him and his team.”

Roethlisberger, being an elite quarterback for almost his entire career, knows what a good quarterback looks like. Him singing the praises of Pickett means a lot, and if he is right and the Steelers have found their franchise guy then the team is in a good spot. The NFL is a quarterback-driven league, and it’s possible the Steelers just found theirs.