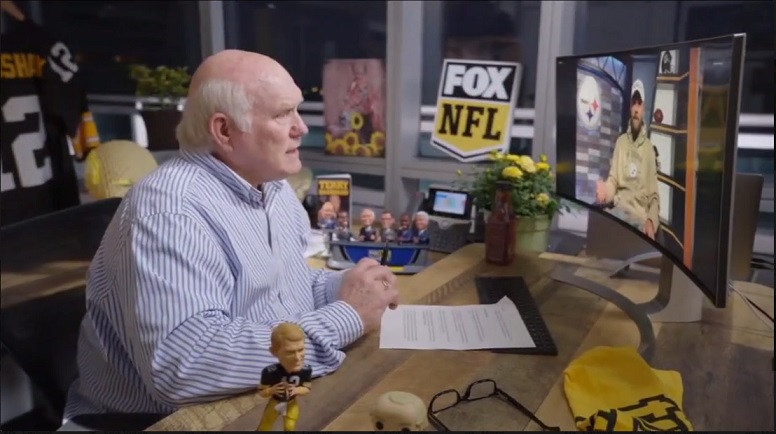 Did you see the interview that Hall of Fame quarterback Terry Bradshaw had with Pittsburgh Steelers quarterback Ben Roethlisberger a few weeks ago on the Fox NFL Pregame Show? If you didn’t, you missed a good one. The result of that interview between the Steelers legendary quarterbacks seems to be that they now have a repaired relationship.

Bradshaw seems enormously proud of that interview had had with Roethlisberger recently and with good reason. He’s even still taking about during interviews that he does with hosts of other shows. Recently, Bradshaw was a guest on “The Herd” with Colin Cowherd and the four-time Super Bowl champion talked about how he and Ben Roethlisberger are now on good terms which each other, which hasn’t been the case for a long time.

“I did an interview with Ben Roethlisberger, and it was the best interview I’ve ever done because of the friction between the two of us, self-imposed or whatever,” Bradshaw said of his pregame interview with Roethlisberger on Fox before the Steelers-Eagles game a few weeks ago. “And out of that interview him being relieved, jovial, fun to be with, calling me a superstar and having fun with it. And … we came out of that interview, and I said ‘wow.’ It felt so good because I was nervous doing the interview because we haven’t gotten along because of off the field stuff. And I was very critical of him, not his playing, just off the field stuff.”

If you remember, Bradshaw and Roethlisberger’s poor relationship dates way back to when the former told the latter early in his career that he shouldn’t be riding a motorcycle without a helmet. Roethlisberger didn’t take kindly to Bradshaw’s string words at that time and since then there’s always seemed to be a sense of uncomfortableness between the two.

In addition to being critical about Roethlisberger’s motorcycle riding habits roughly 15 years ago, Bradshaw also once criticized him when the two sexual assault allegations came to light in 2010. Even though Roethlisberger was never charged with any crime, it still didn’t prevent him being hammered by major and local media types with Bradshaw being one of them. In fact, Bradshaw seemingly spent half the 2010 offseason ripping Roethlisberger every chance he had and then took another major shot at him during a Fox NFL Sunday pregame show segment.

“Listen, Ben Roethlisberger, some fans think I’ve been too hard on you. … For years you acted recklessly, you hung out at college bars and you disrespected women, Bradshaw said during that 2010 pregame segment. “The Steelers got rid of Super Bowl hero Santonio Holmes for failing a substance abuse test, but they should have dumped you. What you did in my eyes was a lot worse. If I had owned the Steelers, hear me loud and clear, you would not be a Steeler. What you did in my eyes is absolutely unacceptable.”

These last several weeks, Bradshaw genuinely seems to be fine with Roethlisberger. And, as for Bradshaw and Roethlisberger being compared to each other by Steelers fans and others, the former told Cowherd on Friday that it’s not necessary to do that. Bradshaw said Roethlisberger never has to look over his shoulder at him as he believes the Steelers current quarterback is by far the superior player of the two. Bradshaw even went as far as to say that the eras the two played in are much are different, and the game has changed tremendously from when he played. He also stated that the modern-day NFL free agency system makes it a lot harder on starting quarterbacks such as Roethlisberger.

“He has had to deal with various players [sic] interchangeable. OK? I didn’t, said Bradshaw of Roethlisberger. “The same team that won the Super Bowl when you [Cowherd] were 13, is the same one that won the Super Bowl when you were 19. That’s before player movement. Now you can get new players in. You have Le’Veon Bell, gone. You have Antonio Brown, gone. Your tight end, gone. Players come in and want more money, gone. You can’t pay them all.

“And the Steelers have done a great job of drafting players. But he doesn’t need to look over his shoulder at me because if you ask me right now, I can’t warm up him statistically, it’s not even a contest. We won four Super Bowls and I never had anybody say, ‘Hey Terry, how many yards (have) you thrown for?’ Well, I am glad I can’t remember because it’s pretty embarrassing. But you can’t say it’s a different era, you just accept it and move on and that’s life.”

“This Steelers team? Absolutely,” Bradshaw said. “As a matter of fact, the way they’re playing and playing very consistent, last week on the Fox pregame show, I laughed at Cleveland. They’re talking ‘they’re going to go in there this is the new Cleveland Browns.’ I said, ‘they are going to get that butt whooped.’ Ben and I are both 12-0 against Cleveland at home. He is now 13-0. And I am not worried about Cleveland. We don’t lose to Cleveland, not with Ben playing. But, yes, I think they’re playing better than Baltimore. I don’t know of another AFC team, right now, Tennessee, who they are playing this week, and who I obviously picked to beat Tennessee, two undefeateds, there’s three left. If they go 6-0, they’re just building momentum, momentum, momentum and Ben’s playing lights out.”

So, will we see or hear about Bradshaw and Roethlisberger having more interviews and personal conversations with each other moving forward into the future? It sure sounds like that’s a distinct possibility now based on what all Bradshaw has said these last several weeks.

Bradshaw is indeed right on the money with that last line and here’s to him being right about everything now being mended between he and Roethlisberger for good.