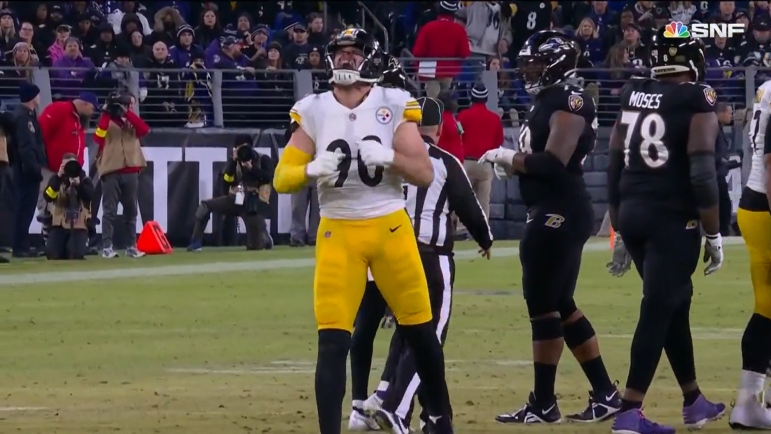 It might have been a tough season for T.J. Watt, dealing with injuries, watching his team battle through a tough first half of the season, fighting back until the end. But he wouldn’t trade it for anything.

Now healthy and part of a stingy Steelers’ defense giving the team a legitimate shot to make the playoffs, Watt’s enjoying every minute of playing. Speaking to NFL Rewind on Sirius Radio following Pittsburgh’s huge Sunday night win over the Baltimore Ravens, Watt says he’s just trying to keep the energy-level high in the locker room.

“I just try to bring as much energy and as much juice and splash as I possibly can to this defense, to this team,” he told hosts Zig Fracassi and Shane Vereen. “Enthusiasm and passion is very infectious and that’s just what I try to bring to the table every time I suit up. Because I am living the absolute dream.”

Being on the football field is good enough for Watt because for a chunk of the season, his dream was a nightmare. He dealt with the most severe injury of his NFL career, partially tearing his pec in Week One’s upset win over the Cincinnati Bengals. Without him, the Steelers’ defense went into a shell. Reliant on a strong front four to get to the quarterback, Pittsburgh’s pass rush tanked. Even with Watt’s return and an uptick in pressure, the Steelers have just 33 sacks this season. It’ll end the team’s five-year streak of having 50+ sacks and it’ll be the team’s lowest mark since 2014.

When he first returned, Watt expressed how happy he was to simply be back on the field.

Even after getting back from the pec injury after the bye, Watt suffered a rib injury versus the Indianapolis Colts a few weeks later. He essentially admitted he was playing through it just so he wouldn’t miss more time and his play quieted because of it. A rib injury for an edge rusher constantly being chipped isn’t a fun place to be.

But Watt has gotten healthier and has 3.5 sacks over his last four games. He’s coming off an especially strong game to beat the Ravens, racking up three QB hits, two tackles for a loss, and a sack while playing nearly every single snap. Despite the tough year, he still will finish third on the team in sacks and has 77 in his Steelers’ career. Barring another major injury next year, Watt will become the franchise’s all-time sack leader in 2023.