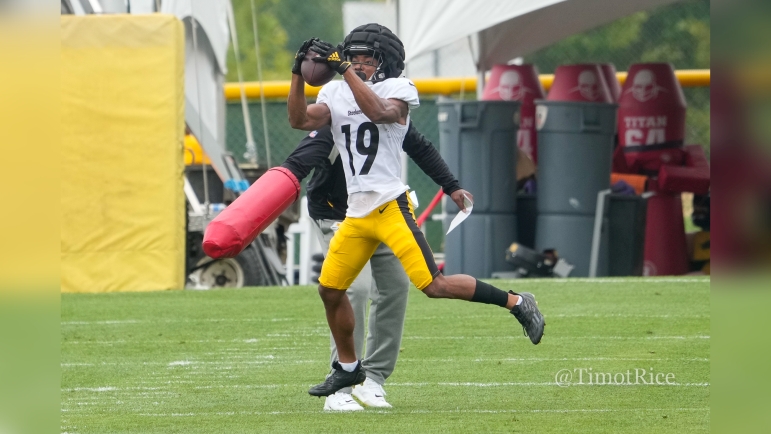 The Pittsburgh Steelers may have made the best trade of the NFL season when they shipped off Chase Claypool to the Chicago Bears for the Bears’ second-round pick in the 2022 NFL Draft. While that selection is now set to be No. 32 overall, the trade did leave the Steelers thin at wide receiver, particularly in the slot, as the production from Steven Sims and Gunner Olszewski (19 catches for 157 yards combined) left a lot to be desired. Entering the offseason wide receiver is a need for the Steelers, and Ray Fittipaldo of the Pittsburgh-Post Gazette said in his chat today that he believes the Steelers will bring in a receiver this offseason, whether it’s in free agency or the draft.

“Yes they’ll either sign a free agent or draft a WR to compete for the No. 3 job behind 14 and 18. They have some options on the roster now, but they probably need to bring in some competition for them,” Fittipaldo wrote in response to a question about the Steelers potentially adding a wide receiver.

While Fittipaldo is just speculating here, it’s not at all surprising to think that the Steelers might bring in a receiver from outside the organization. Their two best internal options are 2022 fourth-round pick Calvin Austin III who missed the entire 2022 season with a knee injury and veteran wide receiver Anthony Miller who missed the whole year with a shoulder injury. Miller is obviously the more experienced of the two, as the former second-round pick by the Chicago Bears has 140 catches for 1,589 yards and 12 touchdowns (including seven his rookie year) in his four years in the league. Pittsburgh re-signed Miller to a one-year deal today, so he’ll at least have a shot to compete for playing time in 2023.

But with two guys who haven’t played in a whole year, it’s tough to rely on either one of them to step up into a starting role early on next season. The Steelers need to add someone alongside George Pickens and Diontae Johnson in the receiver room who can push both Miller and Austin III while also having the ability to play immediately if needed.

There are options in the draft, including Kenny Pickett’s former college receiver Jordan Addison, but with other needs to address the Steelers might not want to go receiver early, especially after taking two in the first four rounds last year. If they opt to go the free agent route, Parris Campbell of the Indianapolis Colts or Richie James of the New York Giants stand out as potential options who have been productive but might not be overly expensive.

Former Steelers receiver JuJu Smith-Schuster is also an upcoming free agent. While it would be awesome if he returned, I’m just not sure he’s going to love the opportunity in Pittsburgh when he’ll likely have the option of staying in Kansas City with Patrick Mahomes and building off a productive 2022 (78 receptions for 933 yards).

What the Steelers do at the wide receiver position will be telling on what the Steelers think about Austin’s readiness to play immediately. If the front office and coaching staff believe that Austin can be a threat immediately, I would expect wide receiver to be addressed in the later rounds of the draft or with a minor free agent signing (Zach Pascal could be an option coming off a down year with the Eagles). If they think Austin is going to need more time, then the position should be a higher priority in the draft and free agency.
It’s going to be an interesting offseason in Pittsburgh, and the team’s search for potential options at slot receiver will definitely be something to watch.