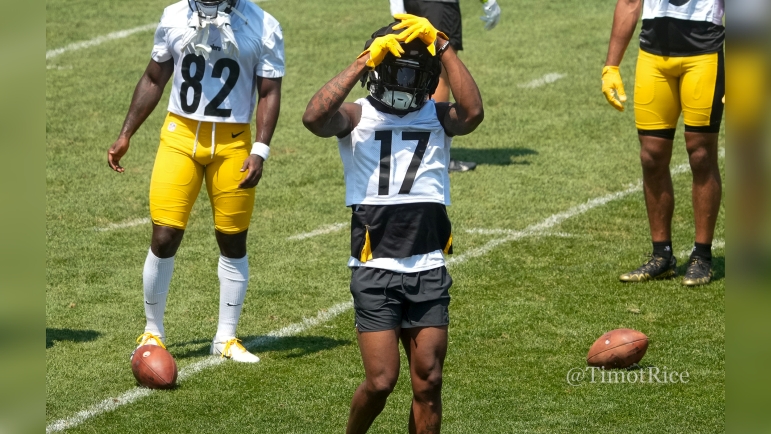 The Pittsburgh Steelers have signed WR Anthony Miller to a one-year deal, the team announced today.

Miller tweeted out a few thoughts after signing with the team, writing he “can’t wait” to get back on the field again.

Had a lot of time to sit back and really observe the game. Learned even more than I already knew. Can’t wait to get back out there again 🥷🏿

Miller, 28, was injured for all of the 2022 season, suffering a right shoulder injury in training camp. At the time, he reportedly needed “several months” to recover from the injury and we spotted him in a bulky sling during the remainder of the summer. Miller was placed on IR on August 15th. He was a pending free agent but is being brought back by the team.

Here’s what we wrote about Miller in our post-summer recap.

“Miller’s camp got off to a well-enough start. He’s rocked up and looks the part and played in the slot and the outside. He looked good the first week before the pads came on with some good run-after ability. But he faded a bit when the pads came on and wasn’t an efficient receiver, catching just 48% of his targets. Drops happen but he had an ugly one on a hot route that cost him a big gainer. Things went from middling to worse when he suffered a serious right shoulder injury that ended his season. He came back at practice in street clothes and his right arm in a black shoulder immobilizer. He’ll spend the year on IR and try to get healthy for 2023.”

Signed by the Steelers last year, Miller has caught just one pass as a Steeler, a two-yard reception in 2021 in a blowout loss to the Cincinnati Bengals.

Miller, a 2nd round pick of the Chicago Bears in 2018, has 140 receptions for over 1500 yards and 12 touchdowns. His best season came in 2019 with the Bears, catching 52 passes for 656 yards and two touchdowns. In addition to the Bears and Steelers, he’s also spent time with the Houston Texans, catching five passes for 23 yards and a touchdown in 2021 before being released. He’s also has a bit of kick and punt return experience though they aren’t his calling cards.

He’ll add receiver depth as someone who can play in the slot or on the outside. He’ll compete for a roster spot on the back end of the team’s roster this summer, provided he makes it that far. If he does, he’ll compete with Miles Boykin, Gunner Olszewski, Steve Sims (if retained) and potentially other outside players yet to be signed for the final wide receiver spot on the team’s roster.