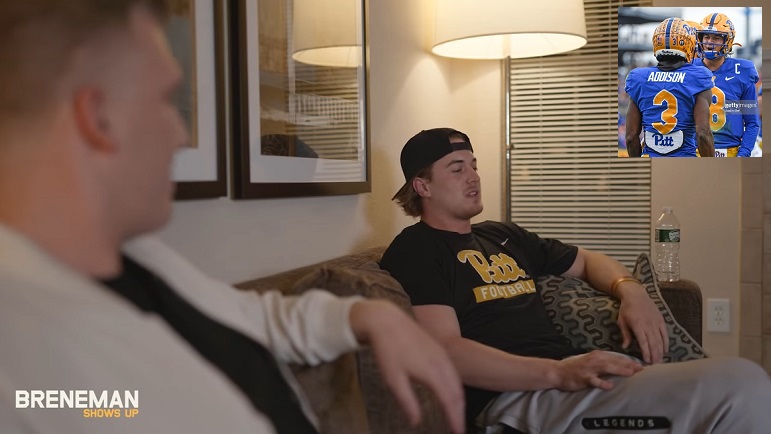 On Monday, USC wide receiver Jordan Addison declared for the 2023 NFL Draft as underclassman and as expected, there was instant hype from fans of the Pittsburgh Steelers that the team might pick him this spring so that he could be reunited with quarterback Kenny Pickett as the two played together for a few years at the University of Pittsburgh. On the heels of Addison declaring, an interesting 2022 pre-draft interview with Pickett has now resurfaced that includes him talking about potentially reuniting with his former wide receiver at Pittsburgh early in his NFL career.

The interview in question took place during an Adam Breneman videocast in March of 2022 and that was obviously ahead of the 2022 NFL Draft. During that sit-down, Pickett talked glowingly about Addison and that was before the wide receiver transferred to USC.

Kenny Pickett on Jordan Addison from March 2022 “I’ll be slamming the table for him to get drafted wherever I go.” #Steelers #NFL pic.twitter.com/Jr8D8cPnoj

Pickett continued with his praise of Addison.

“So, to watch him grow from like that 2020 season, which was a COVID year, that’s the kid’s first year is the COVID year. It’s tough to like have a freshman learn all that stuff,” Pickett told Breneman. “So, I was so happy to come back and work with him for another year and like just as dedicated as I am. So, like, never missed a throwing session, never missed a film session. Always where I needed him to be and like, there’s a reason why I always looked his way, man. The kid, he just, I could trust him and he obviously he’s a great player.”

Pickett then delivered a money statement when it came to him potentially playing with Addison in the NFL once the wide receiver became draft eligible.

“So, yeah, it was a really good relationship that we had and to say the least, I’ll be banging, you know, slamming the table for him to get drafted wherever I go.’

Well, with Pickett obviously now with the Steelers, it will be interesting to see just how much table slamming he’s able to do this offseason when it comes to his want to reunite with Addison, who many draftniks firmly believe will be a first-round selection in the 2023 NFL Draft now that he has declared.

The Steelers selected two wide receivers in the 2022 NFL Draft for Pickett to develop along with in George Pickens and Calvin Austin III, in addition to signing wide receiver Diontae Johnson to very lucrative contract extension during training camp. While Pickens played his rookie season and flourished in the process; Austin missed his entire rookie season with a foot injury. Even so, Austin, a likely new slot option for the Steelers in 2023, should be back healthy and ready to go this summer.

Where does Addison best fit at the NFL level? Probably in the slot, although he did show position flexibility throughout his college career. According to Pro Football Reference, Addison played 1,102 snaps in the slot and 757 snaps out wide during his three years in college on his way to recording over 1,200 receiving yards at both positions. The Steelers, by the way, didn’t get much production out of the slot position throughout the 2022 season.

Could Addison still be in the board for the Steelers art 17rth overall in the 2023 NFL Draft? It’s obviously really hard to say for sure at this point. If he is still available come that selection, I bet Pickett will have already precampaigned to the Steelers front office by then for them to strongly consider adding his former college teammate.

The Steelers haven’t selected a wide receiver in the first round of a draft since 2006 when Santonio Holmes was the selection at 25th overall. Holmes obviously helped the steelers win a Super Bowl in 2008 and he was even the MVP of that championship game win as well.

You can watch that full interview with Pickett from March of 2022 below.