After diving deep into my CATS metric, I wanted to zoom in on the explosive play aspect of the 2022 regular season. Today we will be looking at what I call Adjusted Explosive Plays (AEP), which starts with the total count of explosive plays (20 yards or more) on both sides of the ball, then if the play was a double explosive of 40 yards or more adding a multiplier of two, and triple explosive plays of 60 yards or more multiplying by three. For every play that ended in the end zone, I multiplied by six to give the greatest emphasis on the ultimate goal of scoring points. Here are the results: 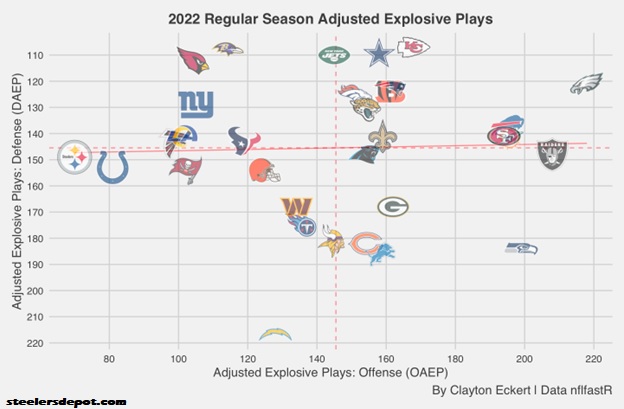 Right away we see the Pittsburgh Steelers on the far left of the chart with the worst OAEP in the NFL in 2022. This gives painful context to what we’ve been talking about on Steelers Depot, with the dire need to create more explosive plays on offense next season, and hopefully have more success doing so particularly through the air (where a majority of these plays occur) as my passing locations charting highlighted this year.

On defense, the Steelers allowed a total of 67 explosive plays (T-23rd), eight double explosives (T-fourth), two triple explosives (T-13th), and ten explosive touchdowns (T-16th) bringing their DAEP to 149 for an improved 21st rank. While the overall explosive play number could be lower they were much closer to league average, and it is encouraging to see their above average results in the adjusted view overall that the group can hopefully build on even more in 2023.

Looking across the league, seven of ten teams that were above the mean on both sides of the ball made the playoffs (70%), including all four teams that are advancing to the conference championships: Philadelphia, San Francisco, Kansas City, and Cincinnati. Very telling data that points to what Pittsburgh should aspire to, and here’s to hoping it’s a productive offseason with a ton of work to do in this regard. In terms of adjusted explosive play differential (OAEP-DAEP), the Steelers come in at -79 in 2022, ranking a lowly 31st in the league due to such a poor offensive number (pun intended). Knock on wood this young group that is largely returning can provide more in 2023, led by a more experienced Kenny Pickett at quarterback.

To close, here is a visual of the differentials across the NFL: 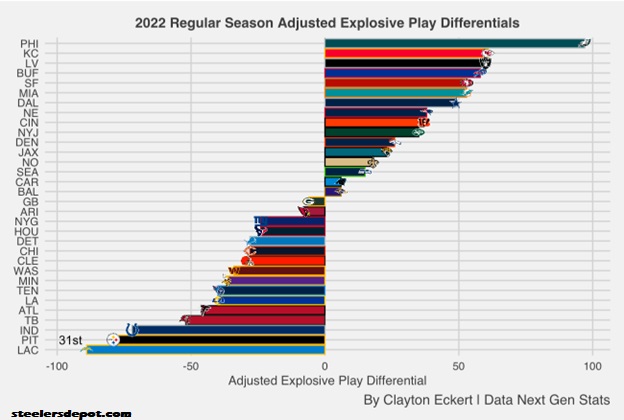 What are your thoughts of the results from the 2022 regular season? Do you think Pittsburgh can improve in this facet of the game next year? Thanks for reading and let me know your thoughts in the comments!