Today I wanted to provide some valuable team metrics for the 2022 regular season, and by the end of the article use a cumulative format I came up with this summer to summarize how teams fared along with takeaways for the Steelers season. The three main stats used are Adjusted Net Yards per Pass Attempt (ANY/A), Turnovers and Explosive Plays (TOX), Successful Run Rates, and the total calculations called CATS for short.

First, let’s look at ANY/A which is defined as (Passing Yards – Sack Yards + (20* Passing TD) – 45 * Interceptions)) / (Passes Attempted + Times Sacked). Using the differential for offenses (OANY/A) and defenses (DANY/A), this is the most predictive individual stat in predicting Super Bowl Winners that I have found in my studies: 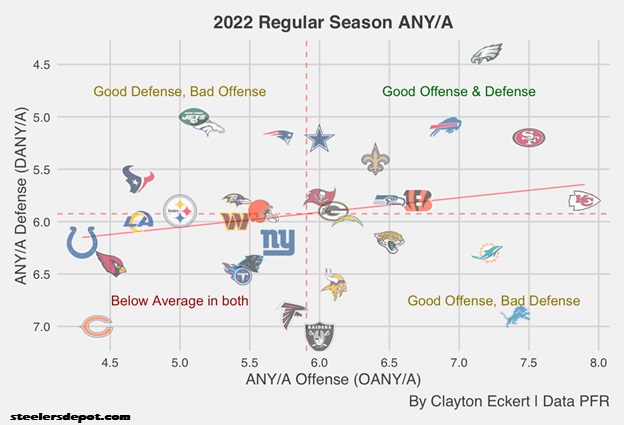 Looking at the teams on the top right first, we see eight of the nine teams (88.9%) clearly above the mean on both sides of the ball made the playoffs, with the Saints being the exception. Four other postseason teams landed above the mean in OANY/A, highlighting the high percentage (12/14, 85.7%) that were above average on offense. For comparison, there are nine playoff teams above the DANY/A mean (64.3%), emphasizing the importance of the stat and the improvements Pittsburgh needs to make particularly on offense. The Steelers ended the year with a five OANY/A which ranked 27th, along with a 5.9 DANY/A that tied for 15th, both improving in the post bye stretch. Looking forward to 2023, we will obviously need to see more downfield throws from the offense with greater success if the team hopes to return to the playoffs next season. The other important part of the equation is the lack of passing touchdowns this year, having only 12 on offense which was worst in the NFL, and only one of two teams with more interceptions (14) this season.

Perfect time to transition and see how teams fared in the turnover and takeaway departments: 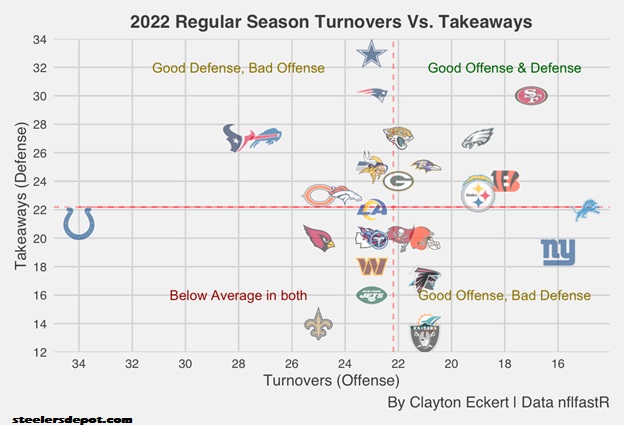 Here we see an aspect of Pittsburgh’s season that was above average on both sides of the ball. The Steelers 19 turnovers tied for fifth lowest, highlighting their improvement particularly as the season progressed and reiterates the passing touchdowns point from the ANY/A takeaways. Their 23 takeaways on defense tied for 14th in the NFL, thanks to their tie for the league lead in interceptions (20) with the 49ers, who had the best balance on both sides of the ball in 2022. Very encouraging to see Pittsburgh on the top right with nine teams, six of which (66.7%) made the postseason. Here’s to hoping this is an element they can carry over and perhaps build even more on heading into the 2023 season. 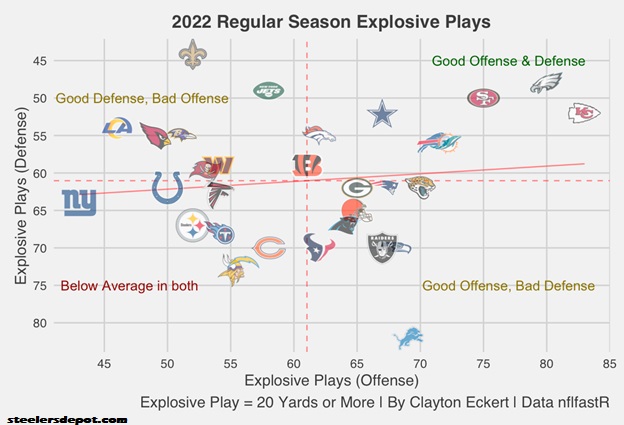 This element of the Steelers 2022 season left much to be desired, and were one of eight teams below average on both sides of the ball. Of those teams, only 3/8 made the playoffs (37.5%), two of which were eliminated in the wild card round, leaving the Giants which I think many would agree they are not likely to hoist the Lombardi this season. Pittsburgh had 52 explosive plays on offense which tied for 26th in the league, along with 67 on defense that tied for 23rd. This gives additional context to the needed improvement mentioned earlier, particularly needing a higher completion rate than what we saw as the offense opened up toward the end of the season as well as limiting the opposition on defense. Looking at the top right, 7/8 teams that landed at or above the mean on both sides of the ball punched their postseason ticket (87.5%), which highlights how important the explosive play element is to success in the NFL. 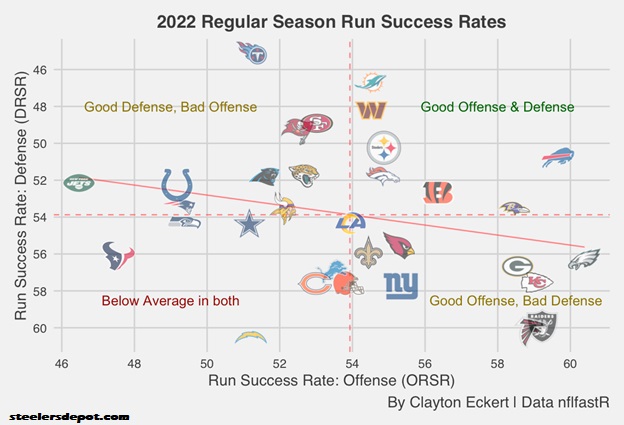 Another very encouraging element to Pittsburgh’s 2022 season was their improvement in the run game on both sides of the ball, landing on the top right with seven teams, four of which made the playoffs (57.1%). Seven postseason teams were above average on offense (50%), compared to eight on defense (57.1%). The Steelers 54.9% ORSR impressively and encouragingly soared up to the 11th rank in the NFL by seasons end, and made an even stronger improvement on the defensive side of the ball with a 50.2% DRSR that landed at sixth best this season.

So of the 2022 data using the CATS formula, run success rates and turnovers had lower correlation to making the postseason, with explosive plays and the all-important ANY/A stat still reigning supreme as the best individual stat to predict playoff teams and Super Bowl winners. Considering Pittsburgh’s strongest facets of their 2022 season was in the turnover and run success rates, and struggles in the ANY/A and explosive play elements of the game, we get a clear picture with context around the league why they are at home instead of playing January football (so close though). Across the NFL, the CATS metric favors eight playoff teams at the top of the list: Philadelphia, San Francisco, Kansas City, Buffalo, Dallas, Miami, Jacksonville, and Cincinnati. Seven of these teams are advancing to the divisional round, with Miami being eliminated (quarterback Tua Tagovailoa injured) and the surprise team being the Giants, but face a tough matchup in the Eagles who have the top ranked CATS differential.

To close, here’s a table of the stats used today showing the differential numbers of teams offenses and defenses along with their ranks, and sorted by CATS differential: 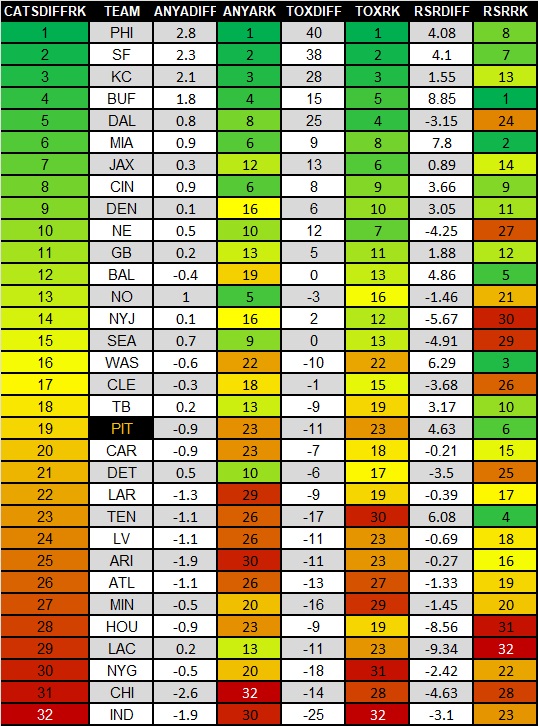