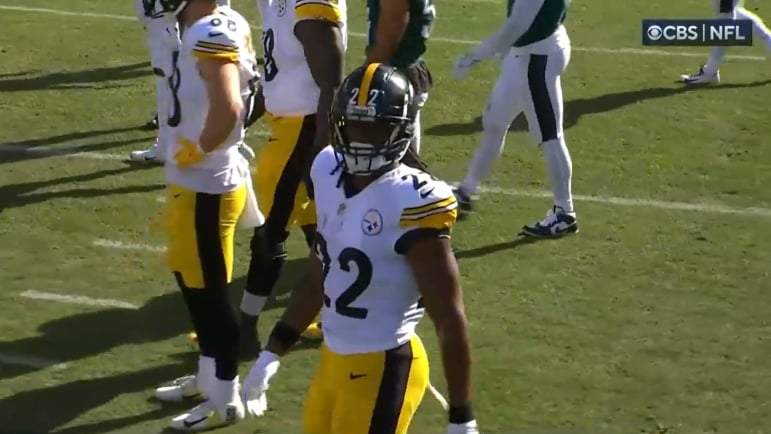 We’ve just passed the bye week for the Pittsburgh Steelers, and the 2022 season hasn’t gone the way many were hoping for. The team currently sits at 2-6 and has been effectively eliminated from playoff contention barring some wild second-half surge down the stretch. The offense is currently one of the worst in football, having no semblance of identity as the passing game can’t connect for big plays down the field and the running game hasn’t had a rusher gain more than 74 yards in any game this season.

While some of the blame in the running game falls on the continual porous play by Pittsburgh’s offensive line, RB Najee Harris isn’t without fault. In fact, Bleacher Report’s Kristopher Knox recently posted his biggest busts of the 2022 season at the halfway point and had Harris make his list based on the expectations the second-year running back had entering the 2022 campaign

“[Harris] finished with 1,200 rushing yards, 74 receptions, 467 receiving yards, 10 touchdowns and a Pro Bowl nod,” Knox said regarding Najee Harris’ 2021 season. “This year, however, the 24-year-old has been a bust. Harris has averaged just 3.3 yards per carry, hasn’t topped 74 rushing yards in a game and has three combined touchdowns. Instead of being a bell-cow back, he’s started to cede touches to undrafted rookie Jaylen Warren.”

Much like Knox mentioned above, instead of taking a second-year leap, Harris has seen his impact and productivity plummet compared to his rookie season as he is on pace to rush for only 767 yards in 17 games while only catching 51 passes for 238 yards. Having conducted a recent film room study on Najee Harris and his performance against the Philadelphia Eagles, a lot of the blame falls on his offensive line doing him no favors in terms of creating running lanes and allowing defenders to smother him in the backfield.

Still, Harris isn’t without blame either as he has looked indecisive at times this season and hasn’t been playing to his skill set as a big, bruising workhorse back. He seems tentative at times, even when there is a hole to be had. While there is still half of the season yet to be played, Harris isn’t being seen in a positive light. Granted, Najee Harris had to deal with a Lisfranc injury at the start of training camp this season, likely affecting his play at least to start the 2022 campaign. However, as Knox concludes in his blurb about Harris, he is starting to look a lot like another former first-round Alabama RB that had a strong rookie campaign but struggled after that.

“Now, Harris was more of an accumulator than a breakaway back in 2021 (3.9 yards per carry), but most expected more than this for an encore,” Knox said regarding Harris. “Harris has been below average this season, and it’s fair to wonder if his strong start and quick decline are mirroring the career arc of a true Alabama bust, Trent Richardson.”

Is Najee Harris On The Same Career Trajectory Of Another Former Crimson Tide Running Back?