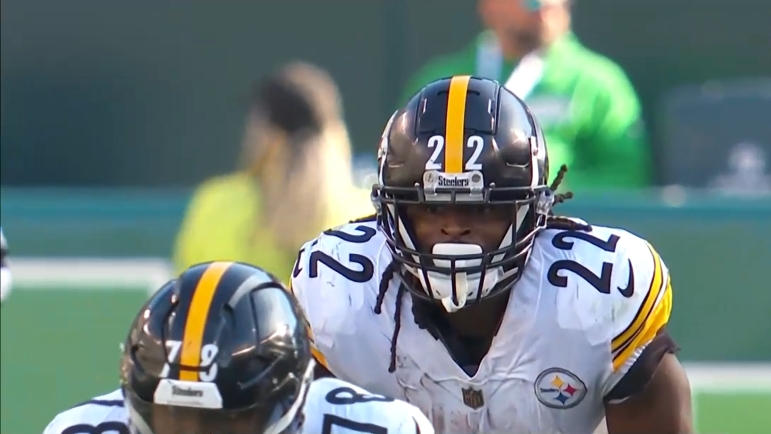 The Pittsburgh Steelers find themselves spiraling after losing in embarrassing fashion to the hands of their in-state rival Philadelphia Eagles Sunday afternoon, getting run out of town by a score of 35-13. The offense continued to look lost after failing to protect Kenny Pickett in the pocket as well as once again abandoning the running game due to its ineffectiveness.

Najee Harris was noticeably frustrated after his poor performance on Sunday in which he carried the ball eight times for 32 yards (4.0 YPC) and caught six passes for another 26 yards. While the 4.0 yards per carry may look respectable, Harris started the game with four carries for a grand total of zero yards. It wasn’t until Philadelphia was up big that they called off the dogs a little in the second half to allow Harris to get some breathing room on the ground.

Harris mentioned after the game that he can’t do everything on offense in terms of making the hole he has to run through. This comes off as a bit odd from Harris, as he has put the blame on himself on numerous occasions rather than diverting the blame to his offensive line. Still, given his lack of involvement on the ground and the fact that Pittsburgh was once again made one-dimensional in this game, it’s understandable why Najee Harris was so frustrated with the result.

When going back through the tape, there were plenty of examples of the offensive line doing Najee Harris no favors when it comes to having success in the running game. There were numerous occasions where defenders immediately beat their blocker right off the snap, getting into the backfield and limit Harris’ chances as a successful run. On the first play of the game #90 Jordan Davis beats Mason Cole and James Daniels inside while Chase Claypool falls off his block attempt on #22 Marcus Epps, bottling Harris up at the LOS.

Here’s another example on second-and-long where Harris takes the hand off to the right side and #76 Chukwuma Okorafor gets beaten by #91 Fletcher Cox who goes across his face into the gap and wraps up Harris in the backfield for a small loss on the play.

Yet another play where Marcus Epps runs into the backfield through the LOS unblocked as Mason Cole and Kevin Dotson block the nose tackle. Harris manages to jump out of the tackle attempt by Epps and simultaneously tries to spin out of a tackle by #97 Javon Hargrave who beat Dan Moore Jr. inside as Harris manages to get to the LOS for no gain on a play where he should have lost yardage.

Still, while Harris didn’t have any help from his offensive line in this one, he isn’t without blame himself. Many took to Twitter to criticize Harris on this catch made on third-and-three in Philadelphia territory. Harris catches the ball in the flat and just needs to turn up field, put down his shoulder, and get the last couple of yards to move the sticks. However, instead of using his 6’2, 240lb+ frame to try and break a tackle and run through contact, Harris attempts to shake the defense, going nowhere and his brought down for a gain of one yard.

That play was uncharacteristic of Harris who was known for his bruising running style coming out of Alabama. Still, Harris managed to make up for it the following play on fourth down where he catches a pass in the flat and manages to pick up nine yards and move the sticks.

After that mishap on third down by Harris, we saw him play with a more aggressive demeanor regarding his running style. Here are two clips, the first on a reception by Harris near the LOS and the second on a zone run that he bounces to the right side where Harris meets contact and drives his legs on contact to pick up a couple extra yards from where he was initially hit.

Harris’ best run of the day, and on the entire 2022 season, came on this draw play where the middle of the defense parted like the Red Sea with a hole so big you could drive a semi through it. Pittsburgh blocks the play up perfectly as Harris puts his foot into the ground and runs downhill into the secondary, meeting Epps and the open field and puts his shoulder down and steamrolls the defensive backs this time instead of trying to get skinny, finishing the 18-yard run falling forward.

Overall, it was yet again a poor performance by Najee Harris on the stat sheet who has yet to rush for more the 74 yards in a single game this season. Despite the additions of Mason Cole and James Daniels in free agency this offseason, Harris has been worse on the ground, having no room to run outside of a couple of wide open plays like the one above with defenders routinely getting into the backfield, forcing him to have to make something happen just to get back to the LOS.

Still, Harris isn’t without blame either as he has looked indecisive at times this season and hasn’t been playing to his still set as a big, bruising workhorse back. He seems tentative at times, even when there is a hole to be had. This could be lingering effects from the foot injury he was dealing with to start the season, but excuses are becoming hard to come by for the former first-round pick who was outplayed by rookie UDFA Jaylen Warren again Sunday who toted the ball only six times but managed to pick up 50 yards (8.3 YPC) while pitching in another 25 yards receiving on three catches.

This isn’t to say that Warren is outright the better talent than Harris, but it is evident that he has outplayed Harris thus far in 2022 on the limited opportunities given to him. Harris isn’t getting many favors from his offensive line blocking for him, but Warren is technically running behind that exact same unit and is showing more of a no-nonsense running style, getting the yardage that he can.

The Pittsburgh Steelers’ running game is a hot mess for seemingly the fourth season in a row since Le’Veon Bell carried the rock. Until the offensive line in heavily addressed to revamp the unit to what it was for a good portion of the 2010s and Harris is more decisive playing to his strengths as a runner, it’s hard to imagine this running game improving at all for what remains of the 2022 season.

What are your thoughts on Najee Harris’ performance against the Eagles? Do you think the blame falls on the offensive line for his struggles, or do you think Harris himself should shoulder some of the blame? How should Pittsburgh go about fixing this porous running game this season and in seasons to come? Please leave your thoughts below and thanks again for reading!