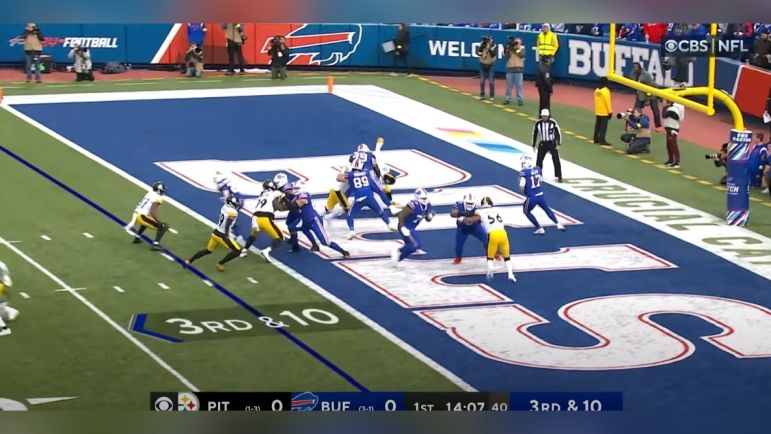 The Pittsburgh Steelers’ pass defense was picked apart by Buffalo Bills star quarterback Josh Allen on Sunday. By the game’s conclusion, Allen had dropped 424 passing yards on Mike Tomlin’s overwhelmed secondary. Among those big plays was a huge 98-yard bomb to No. 13, wide receiver Gabe Davis. The play, which Steelers fans have likely been forced to watch several times, saw Minkah Fitzpatrick get beat, slightly. Davis was just half a foot ahead. To Fitzpatrick’s credit, he too had his hands on the ball all the way into the end zone.

Speaking with the media after the action, Allen recalled the throw and his reaction to all of it. As with any long bomb, such as the one that the Steelers succumbed to on Sunday, there’s an actual delay between quarterback and receiver. That was almost 100 yards (98 to be exact) down the field, so naturally, there’s a bit of a differential as Allen spoke about.

“I kind of got hit right when I threw it. So, I didn’t see him (Davis) catch it. I just kind of heard the crowd go crazy and then I got helped up and just saw him by himself, 90, 90-plus yards down the field. Those ones are cool; it’s going to be tough to beat.”

In many ways, that deep pass set the tone for Sunday’s crushing defeat. It was big play after big play for the Bills as Allen consistently marched his offense down the field. The catch by Davis looking back was an indication of the flood gates opening. Afterward, Allen completed a 31-yard pass to Khalil Shakir, a 26-yard completion to Isaiah Hodgins, and another beautiful short pass to tight end Quintin Morris that went for 26 yards. Essentially, as mentioned before, the Steelers just couldn’t stop the big plays, one after another.

Clearly, there are issues that need to be addressed. The Steelers are certainly talented, as Alex Highsmith alluded to after the game, but talent isn’t enough. Tomlin went out of his way to note that no changes are off the table. How this affects an overwhelmed secondary moving forward will be something worth monitoring.

Josh Allen a bomb to Gabe Davis who ripped away from Minkah #Steelers pic.twitter.com/D7J6fwAtOM