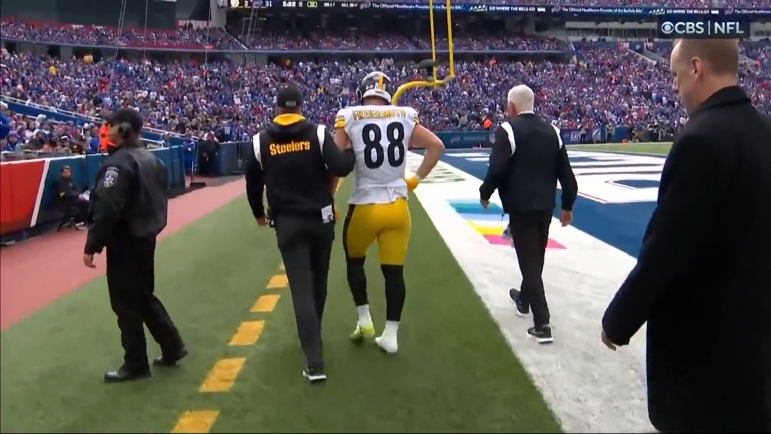 Just two years into his career, it’s hard to ignore the number of concussions Pat Freiermuth has. Officially, three in two years, a scary number for any player in a world where head injuries are treated with the seriousness they deserve. Several players in recent years have walked away from the game over concern for their health. Linebacker Chris Borland was a budding star who retired after suffering concussions througout his life.

For Freiermuth, he’ll return to action Sunday night and play against the Miami Dolphins, missing one game after suffering a concussion in the team’s Week 5 loss to the Buffalo Bills. Speaking to reporters, Freiermuth was asked if he thought about his future after dealing with repeated head injuries.

“Me personally, I don’t think the one against Cincinnati last year counts,” he said via The Trib’s Chris Adamski. “I didn’t pull myself off the field. They pulled me off the field. I had no symptoms in that one. So to me, I’ve only had two.”

Pat Freiermuth is back from his concussion, too

Freiermuth is referring to the second Bengals’ game last year, taking a hit to the head after a 15-yard catch in the fourth quarter. It’s good to hear he didn’t have any symptoms and he quickly moved through protocol, suiting up the following week. But the other two moments have been scary. He appeared to be knocked out cold in last year’s game against Tennessee and this year’s contest against Buffalo. Here’s a look at both plays.

Unsettling moments. Even trying to discount the Bengals moment means he’s had at least two in two years, a number that can’t continue going forward. Though some players would shrug things off, Freiermuth understands the seriousness of these injuries. But he’s relying on the expertise of team doctors to tell him when he’s cleared to play.

“It’s definitely a nerve-wracking thing but I trust the doctors. We have the best doctors in the world and I’ll continue to go off what they say.”

Freiermuth fully practiced all week and officially exited protocol today, meaning he’ll suit up Sunday night against the Miami Dolphins. On the year, Freiermuth has 20 receptions for 235 yards and one touchdown, settling in as a solid starter and one of the better players at his position. But he’ll need to consider his long-term health going forward, especially if he suffers another concussion.