The Pittsburgh Steelers now have wide receiver Diontae Johnson signed to an extension that results in his being the 17th highest-paid player in the NFL at his position. On the heels of that signing, early details related to Johnson’s extension have surfaced, and with those, below is a projected look at the team’s 2022 salary cap situation as we sit here on Friday.

As was passed along on Friday morning, Johnson’s extension should result in the wide receiver having a new 2022 salary cap charge of $7,616,690. That is an increase of $4,543,333 from what it was originally scheduled to be. If the cap numbers and structure provided so far are correct, the team would then be $9,407,508 under the cap.

I now have the Steelers projected at not having any effective salary cap space long-term that they can use, barring them restructuring the contracts of either outside linebacker T.J. Watt or defensive tackle Cameron Heyward. That current ($4,735,692) projection number, however, takes into account several expected forthcoming and predictable costs the team will have prior to Week 1 of the regular season.

Sure, the team has plenty of cap room in real-time that they can use now, and that long-term overspent number is based on the top 51 remaining the same through the final cuts taking place, which it won’t. There’s a good chance that salary cap space will be created as part of the final roster cuts, especially if players such as wide receiver Miles Boykin and inside linebacker Marcus Allen are both cut. The effective usable salary cap number used in the chart is just a current snapshot and only used as a projection based on where the team sits currently and expected forthcoming costs. Don’t get upset over that number.

It’s also important to note that running back Jeremy McNichols is now on the team’s Reserve/Injured list on a lowered split salary amount. If he remains on that list come Week 1, that charge will go against the cap. The same goes with any other players that might wind up on the Reserve/Injured list between now and Week 1. Odds are good that McNichols will have company on that list, and my projections have an IR buffer within them.

There are now roughly five weeks remaining of the Rule of 51, and with the three major contract extensions now completed, it will be interesting to see if the Steelers ultimately decide to free up more salary cap space via a contract restructure on Watt. It really could go either way and that’s mostly dependent on final cuts and how much available salary cap space the team wants to open Week 1 with.

The projected future salary cap expenses in the table below are based on the history of the team the last two years. 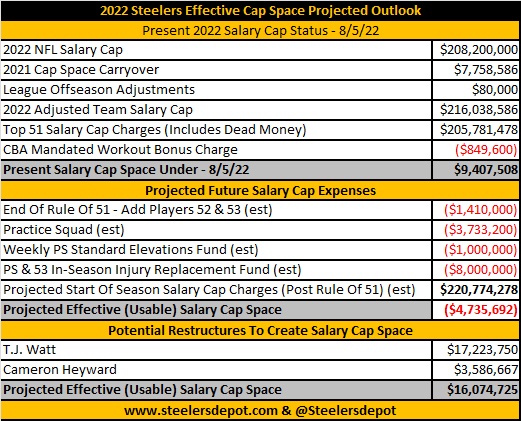