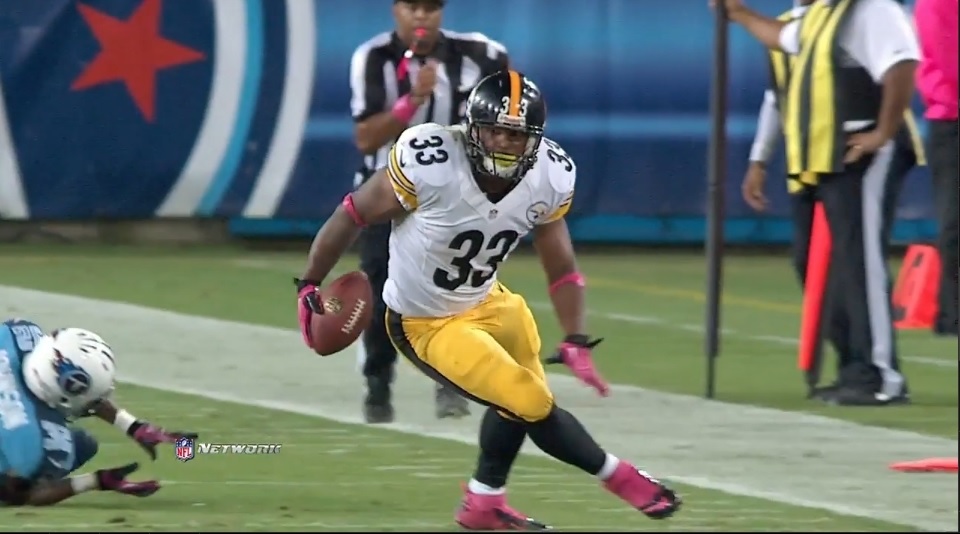 In a corresponding move after placing RB Jeremy McNichols on IR, the Pittsburgh Steelers signed RB Master Teague to the training camp roster. Teague went undrafted out of Ohio State this spring, and after initially signing with the Chicago Bears as a UDFA, he was cut three days later. Now, he finds himself in Pittsburgh looking for a chance to fight for a roster spot behind Najee Harris.

Master Teague III addressed the media after practice yesterday, saying that he brings a “thumper” running style along with the pass blocking chops that should help him make his case to win the RB3 job on the depth chart. He also mentioned immersing himself in special teams and doing whatever ST Coach Danny Smith asks of him to make himself more valuable to the team as more than just a backup running back.

After conducting a film room on Teague, his comments on his running style and pass protection do stick out as strength he brings to the table. He is a big, strong, and powerful runner that can bounce off tackles and can be an effective short yardage and goal line back. He also has the strength and willingness to step up and take on blitzers as a pass protector, having the frame to hold his own should his technique be sound on that play.

When looking at Teague’s chances to make the 53-man roster, I had my memory take me back to a couple other big-bodied backs that were undrafted yet made enough of an impression on the coaching staff to stick on the roster past final cuts and play in the regular season.

One player that stood out as a good case study is former Steelers RB Isaac Redman. Redman went undrafted out of Bowie State University in 2009, finishing as the school’s all-time leading rusher upon his graduation. He signed with Pittsburgh as a UDFA after the draft but ended up being released after the preseason Redman would bounce on and off the practice squad his rookie season.

In 2010, Redman made the regular season roster and served as the team’s goal line back, using his 6’0″, 230 lb. frame to rumble his way forward in short yardage situations. Redman ended up playing in 50 games with Pittsburgh, starting seven. He totaled 282 carries for 1,148 yards and five TDs along with 50 receptions for 408 yards and two scores. He also saw some action as a kick returner, taking five career returns for 99 yards.

John Clay went undrafted out of Wisconsin in 2011 after a stellar career with the Badgers, totaling 3,413 yards and 41 TDs as a bruising runner in a run-heavy offensive attack. The 6’1″, 250 lb. bulldozer signed with Pittsburgh as a UDFA in July of 2011. He was waived in final cuts after the preseason but signed with the practice squad immediately after. He was signed to the active roster in December and played in two games, totaling 10 carries for 41 yards and a TD. He was waived/injured from the team the next season and was given an injury settlement from the team.

While the first two names listed above didn’t make the initial 53-man roster, Terrell Watson did after he signed with Pittsburgh in 2017. Watson had been bouncing around the league the previous two seasons after going undrafted out of Azusa Pacific where he rushed for nearly 6,000 yards and 79 TDs, breaking every school record previously held by The Nigerian Nightmare Christian Okoye. Despite his prestigious college career, Watson found himself struggling to stick on a roster, spending time with the Bengals, Broncos, Browns, and Eagles before ending up in Pittsburgh.

Watson had himself a strong 2017 preseason, rushing for 173 yards on 37 carries with a TD along with six receptions for 47 receiving yards. His performance was enough for Watson to win a roster spot behind Le’Veon Bell and James Conner and would stay on the roster through November before he was released and signed to the practice squad. He finished his time in Pittsburgh with five carries for eight yards, but also returned seven kickoffs for 140 yards, playing 54% of the special teams snaps in 2017 according to Pro Football Reference.

Terrell Watson known for his power. But he'll throw in a change up every now and then. Sidesteps the LB in the hole. #Steelers pic.twitter.com/bibh9rMkEM

Like Master Teague III, Isaac Redman, John Clay, and Terrell Watson profiled as big, powerful runners that excelled in short yardage/goal line situations. All three RBs had more prolific college careers than Teague but found themselves in the same UDFA boat. Clay and Redman didn’t make the roster initially but managed to make the practice squad and get called up, with Redman sticking on the roster the next four years. In terms of skillset, Teague mostly resembles Watson as a big back that can bang in-between the tackles but also showcases some nice cuts when the sees a hole. While not a kick returner, Teague also brings special teams ability, much like Watson did, to help his case.

In a best-case scenario, Teague can mirror Redman’s career path and become a physical runner behind workhorse RB Najee Harris that can wear down defenses when Harris is off the field. Still, Redman had an innate receiving ability that Teague has yet to prove. In any case, Master Teague III faces an uphill climb to make the 53-man roster, but finds himself in a great opportunity this preseason in an RB room without any stellar options outside of Harris on the depth chart. Should he showcase his strengths as a runner as well as be a serviceable special teams contributor and pass protector, Teague could find himself in a similar situation as the names listed above as a member of the regular season roster.