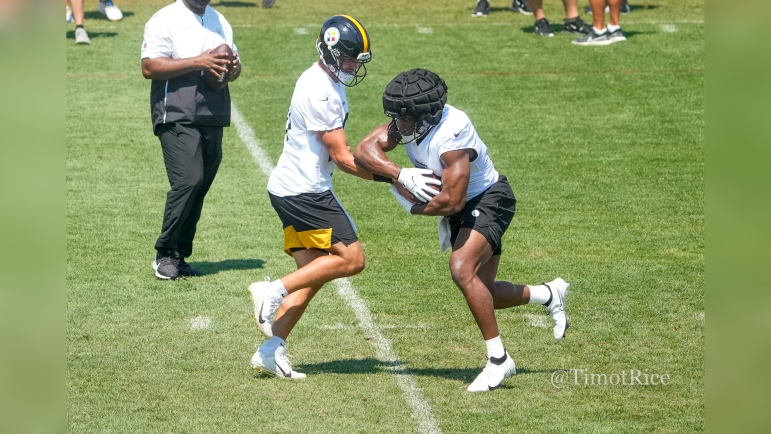 Just yesterday the Pittsburgh Steelers announced that they were placing RB Jeremy McNichols on the team’s Reserve/Injured list with a shoulder injury and subsequently signed RB Master Teague III. Teague signed with the Chicago Bears as an undrafted free agent back in May after the 2022 NFL Draft concluded but was shortly waived after signing. Teague played at Ohio State and mainly served as a complementary back in rotation with J.K. Dobbins in 2019, Trey Sermon in 2020, and TreVeyon Henderson in 2021. In his four seasons at Ohio State, Teague rushed for 1,764 yards and 17 touchdowns on 323 total carries along with 11 receptions for 118 yards.

When you pop in the tape on Teague, you see a big, fast, and explosive back. His testing numbers would confirm those statements as ran the 40-yard dash in 4.47 seconds, posted 27 reps on the bench, and a short shuttle time of 4.29 seconds at the NFL Combine. Here against the Indiana Hoosiers, you see Teague take the outside zone run to the left as he finds the hole and hits the jets once he gets into the second level, pulling away from defenders in pursuit as he runs up the sideline for the score.

Here against Alabama, we see that explosiveness as Teague bounces the run to the corner as the defense closes off the middle, sneaking past the defensive back as he tip toes in for the TD.

While Teague doesn’t have elite long speed at the position, his speed relative to his size is impressive for a UDFA RB. Along with his speed, Teague also has an innate ability to make a quick jump cut and squeeze through gaps despite being a bigger back. We see both his speed and agility in action on this run against Northwestern as Teague takes the handoff and cuts back to the left, sneaking through the gap and accelerates in the second level, pulling away from the defenders converging on him for the long TD scamper.

As mentioned above, Teague possesses some solid elusiveness and vision as a bigger runner. Here against the Hoosiers, we see two plays where Teague displays the ability to change directions quickly with a strong jump cut in the first clip and the vision to find the hole and get skinny through the middle, staying his feet and breaks a couple tackles for a chuck gain.

In the second clip, you saw Master Teague III’s size and power come into play as a runner. The dude is a well-built unit at the running back position, having strong, powerful legs and the power to churn his legs on contact for extra yardage. This makes for him to be an effective runner in short yardage and goal line situations like you see in this TD plunge against the Crimson Tide where Teague runs into #48 Phidarian Mathis who stands him up initially but keeps running his legs on contact and carries the big DL into the end zone for the score.

Teague never showcased much receiving ability during his time at Ohio State, topping out at five receptions in 2020. Still, when it comes to pass protection, Teague has shown to be a willing and capable player in this facet of the game. He has the requisite size and strength to stand up linebackers and keep the QB clean in the pocket. On this rep against Indiana, Teague locates a defensive lineman coming free up the middle and stands him up, stepping in-front of the QB and puts his face in front of a dump truck, neutralizing the defender’s rush.

Still, while Teague has proven to be a capable pass protector, he needs to be more consistent with his technique. There are times where he gets high in his stance and fails to step up into contact and show a strong punch. This results in him getting bulldozed like we see here against #8 Christian Harris coming on a blitz off the edge, being the nail rather than the hammer as he takes contact rather than dishing it out.

Overall, Master Teague III comes to the Steelers as a UDFA back that has little production in the passing game as well as never carried the load at the college level. These superlatives led to him going undrafted as he will have to rely on making a roster as a #3 option in the backfield and be a useful special teams player. Still, Teague brings some intriguing traits to the table including his burst, vision, and decisive quick cut ability all in a stacked frame. He has the size and strength to be an effective power back in-between the tackles, being a logical option to use in short yardage or near the goal line.

The Pittsburgh Steelers have prided themselves in big, physical backs in the past and currently have the same in feature back Najee Harris. Teague shares a similar skill set to Benny Snell as well as Jaylen Warren behind Harris but has more juice than both as a runner. He would have to prove to be a reliable contributor on special teams this preseason to potentially unseat Snell or McFarland for a roster spot, but Master Teague III matches the style of runner Mike Tomlin has been fond of in the past and could make for a bruising complement if Harris would need a breather.

A spot on the 53 may be a stretch as we sit here today, but there is a good chance Teague can at least secure a practice squad spot with a good training camp and preseason.

What are your thoughts on Master Teague III? Do you think that he can compete for a roster spot or practice squad spot this season? Please leave your thoughts in the comments section below and thanks again for reading!