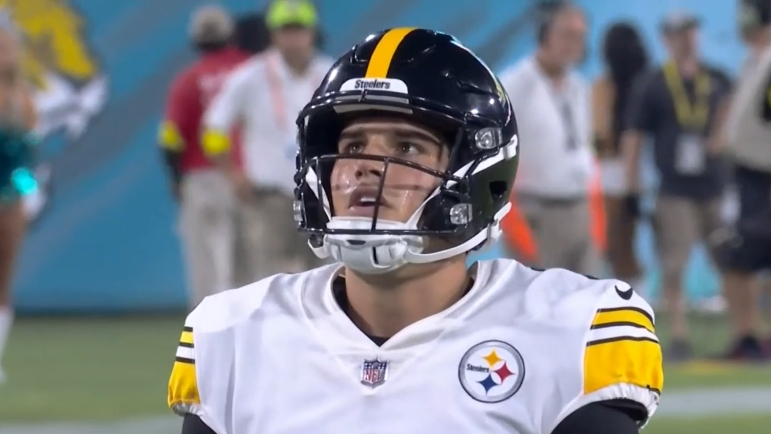 If Mason Rudolph does get traded, it’s most likely to happen over the next two weeks. Now the #3 QB on the Pittsburgh Steelers’ roster, other teams in need of backup quarterback help might be ringing Omar Khan’s phone. That thought isn’t lost on NFL.com’s Eric Edholm, who listed Rudolph as one of several trade candidates as the league nears its cutdown date. Explaining the choice, Edholm writes:

“Pickett’s strong play of late could compel the Steelers to go with two QBs on the 53-man roster to start the season, with seventh-round pick Chris Oladokun a candidate to join the practice squad after being released this week. Trading Rudolph would free up a roster spot and allow Pittsburgh to potentially recoup something of value in return for him now as opposed to hoping he’ll factor into the compensatory-pick formula for 2024.

The biggest question: Do the Steelers want to trade him?”

Pittsburgh considered Rudolph as part of the starting quarterback battle, but it never really felt like he was truly running the race. Mitch Trubisky has worked as the #1 quarterback since the spring, and Rudolph has fallen down the depth chart, now the clear #3 after entering camp as the #2. The Steelers were quick to add quarterback help this offseason, signing Trubisky minutes into the start of free agency while being the first team to draft a quarterback, making Kenny Pickett their pick 20th overall. If Rudolph remains on the roster, he’s poised to be the #3 quarterback and a weekly inactive. In the last year of his deal and bound to play elsewhere in 2023, it’s logical for the Steelers to explore a trade and get something out of him.

While Rudolph hasn’t lived up to his draft hype, he has value as a competent #2 quarterback and spot starter. And there are teams around the league who need help. The Minnesota Vikings recently traded for QB Nick Mullens for a conditional seventh-round pick. We wrote about the links between the Steelers and Los Angeles Rams, the connections between Sean McVay and Mike Tomlin, and Rams’ Assistant QB Coach Zac Robinson and Rudolph. It was Robinson who trained and worked with Rudolph leading up to the 2018 Draft. Los Angeles has an unsettled backup quarterback situation, with John Wolford struggling this past weekend. Matthew Stafford firmly remains the team’s starter but is battling an ongoing elbow injury that is cause for concern. Rudolph won’t command a high draft pick, but could return a fifth- or sixth-round selection.

The important question is the one Edholm ends on. Is Pittsburgh willing to make that deal? GM Omar Khan shot down speculation last week, but as a first-time GM who doesn’t want to give up leverage and create headlines, no one would expect him to publicly entertain the idea. Still, the Steelers have good reasons to keep him. In 2019, they dealt QB Josh Dobbs to Jacksonville for a fifth-round pick. Less than two weeks later, Ben Roethlisberger was lost for the season, forcing the team to rotate between Duck Hodges and Rudolph and miss the playoffs in part due to terrible QB play down the stretch. Those scars haven’t gone away. Pittsburgh doesn’t seem like they’ll be actively shopping Rudolph around. But if someone calls Khan and offers a deal that’s too good to pass up, Rudolph may be on the move.

Elsewhere, Edholm mentions Eagles’ OT Andre Dillard and Eagles’ OL Isaiah Wynn as two linemen who could be on the move. Dillard would be the cheaper option for Pittsburgh, and assistant GM Andy Weidl knows him well. As pure conjecture, that’s one name to watch.

The article also includes cut candidates with two Steelers named, WR Miles Boykin and NT Montravius Adams. Of the two, Boykin is more likely to be released. Adams has dealt with an ankle injury and could start the year on IR if he doesn’t get healthy in time.