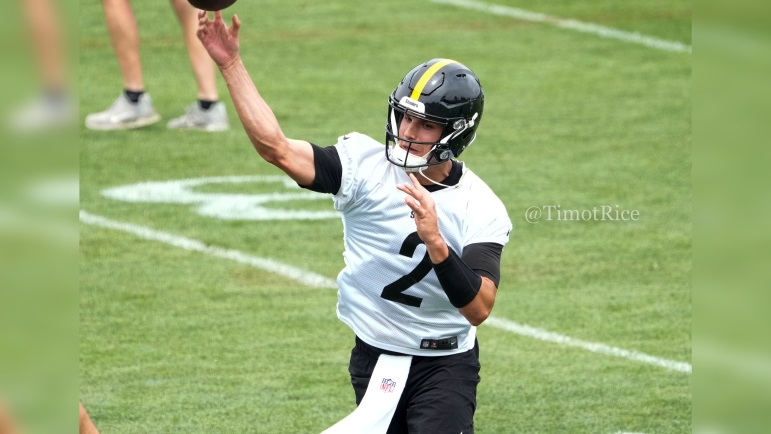 If you asked me today, and here I am writing today, Mason Rudolph is most likely to remain a Pittsburgh Steeler come Week 1. But if you had name another team Rudolph could be suiting up for to start the regular season, it’s the Los Angeles Rams. While Pittsburgh may decide Rudolph has more value in Pittsburgh than being dealt anywhere else, the Rams seem like a logical team to come calling.

Consider this. Starting quarterback Matthew Stafford is already battling an elbow injury. His Week 1 status isn’t in doubt, but according to some, the injury is no small thing. Former Rams’ HC Mike Martz expressed his concern over the injury. Appearing on The 33rd Team and as transcribed by Rams’ Wire, Martz said the following about Stafford’s injury.

“If I’m the head coach here, if I’m the coordinator and he’s still not feeling right with that arm, I’m nervous about it because we’ve had a long time here to get that arm right.”

Even Sean McVay called the injury “tricky” and “abnormal,” relating the issue to something pitchers deal with more than quarterbacks. None of it sounding promising for a 34-year old with nearly 7,000 career pass attempts.

Declined to call Stafford’s elbow issue “tendinitis” and instead noted that “it’s a tricky deal” and “abnormal for a QB”, moreso “things that MLB pitchers deal with” and team is learning more about “on the fly”. Adds Stafford looked great in limited reps today. https://t.co/5eVkA7ixgD

Stafford should start the season and of course, a guy like Rudolph wouldn’t come close to threatening his job. But it may be raising alarm bells in the Rams’ front office to find a Plan B should Stafford’s elbow flare up during the season. Sitting behind Stafford are a lot of unknowns. His top backup is John Wolford, and to his credit, he’s been with the Rams for several years and they know him well. But his gameday action is limited. One career start in 2020, failing to throw a touchdown in a Week 17 win over the Cardinals, with just 42 career pass attempts to his name. It’s a light resume. Curiously, though this is an apparent vote of confidence or a chess-not-checkers decision by Sean McVay, Wolford won’t even play in any of the Rams’ preseason games. To me, that speaks to their level of concern over Stafford’s elbow, not wanting to risk the backup being hurt, knowing he could be relied upon in-season. Stafford is tough and he’s been durable, but he’s not superhuman.

Running the show this summer will be the combination of Bryce Perkins, whose never thrown a pass in the NFL, and USFL star Luis Perez. Perhaps the team has some level of confidence in Wolford, but proven depth behind Stafford is thin.

Enter Rudolph. His ceiling is a competent and capable #2 backup. In Pittsburgh, he’s unlikely to wrestle away the starting job from Mitch Trubisky while rookie Kenny Pickett has rotated with the second-teamers throughout camp. A free agent after the season, Rudolph will almost certainly be playing for another team in 2023. Pittsburgh may opt to speed that process up a year.

When it comes to speculating trades, connections are important. They give more teeth to why another team would be interested and willing to trade. The Rams have one. Los Angeles’ assistant quarterbacks coach is Zac Robinson. Like Rudolph, Robinson attended Oklahoma State. He didn’t have the sterling career there Rudolph did but played well and surely was aware of Rudolph setting virtually all of the Cowboys’ passing records. More importantly, Robinson and Rudolph seem to have a pretty good relationship. Robinson worked with and even roomed with Rudolph as Rudolph trained for the 2018 NFL Draft. This 247 Sports article from 2019, when Robinson was first hired by the Rams, outlines their relationship.

“Robinson spent a lot of time last year from the end of the football season through the 2018 NFL Draft working with former Oklahoma State quarterback Mason Rudolph. The two roomed together during Rudolph’s training period in San Clemente, Calf. while preparing Rudolph for the NFL Combine in Indianapolis and then later it was Robinson that assisted Rudolph in choreographing his Pro Day workout for the NFL coaches and scouts at Oklahoma State.

“Robinson talked about how much he enjoyed the one-on-one teaching time after the process of assisting Rudolph, who is now with the Pittsburgh Steelers.”

If there’s a man in the Rams’ building who’d vouch for Mason Rudolph, it’s Zac Robinson. It doesn’t hurt that McVay and Mike Tomlin seem to have a good relationship too, though Omar Khan and Les Snead would be the ones hammering out a deal. Rudolph is a cerebral, play-within-structure type of quarterback who should fit McVay’s offense well. His offense doesn’t need great scramblers but heady quarterbacks with live arms – Rudolph throws the best deep ball of anyone in the Steelers’ locker room – and McVay could used an experienced backup option able to spot start if Stafford goes down for a game. In fact, McVay’s personally watched what Rudolph can do. Rudolph started and beat the Rams in 2019, going 22/38 for 242 yards, one touchdown, and no picks in the upset victory.

The Rams have an F-Them-Picks mentality, to the point where Snead wore a shirt with the meme on it during the team’s Super Bowl celebration. They’re highly aggressive in choosing players over capital, trading for Stafford, CB Jalen Ramsey, and EDGE Von Miller. Rudolph would be nowhere near in that tier, but the Rams have made smaller trades like acquiring RB Sony Michel from the Patriots last year. No team enjoys wheeling and dealing like the Rams, and they currently own a pair of sixth-round picks in the 2023 Draft. Giving up one of those to acquire Rudolph for a year makes sense for a Rams team trying to repeat as world champs. Draft picks be damned.

Trades take two to tango and it’s unclear if either side wants to dance. Pittsburgh wants to protect its quarterback room as it figures out exactly who it has in Trubisky and Pickett. The Rams may decide to stick with Wolford, who has been able to earn their trust. But if either side is looking to make a move — the Steelers getting a pick out of Rudolph before losing him to free agency, the Rams trying for a serious upgrade behind an iffy Stafford — each side should call the other. It’s a great fit. Money should still be on Rudolph remaining in Pittsburgh. But if he’s going anywhere else, it’s LA.