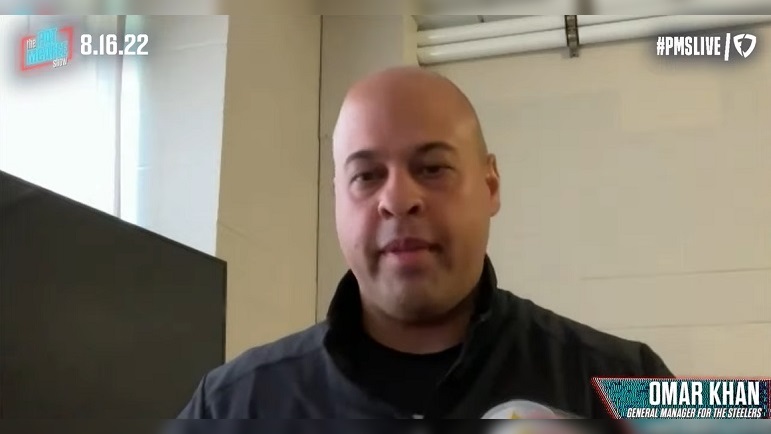 Steelers’ general manager Omar Khan went on the Pat McAfee Show today, and he was asked about the possibility of the team trading a quarterback.

“You take calls, but I’ll be honest with you, we don’t have any intention of trading any of those guys. We really like them. There’s some decisions to be made, but I’d be surprised if anything happens down that path,” Khan said.

Given how the quarterback competition process has played out thus far, it doesn’t seem like the Steelers are looking to move on from a quarterback. The only one they really would move on from is Mason Rudolph, and thus far Rudolph has gotten most of the second-team reps in camp. Couple that with the fact that Chris Oladokun hasn’t gotten any, and it’s reasonable to assume that the Steelers will roll with Mitch Trubisky, Kenny Pickett and Rudolph as their three quarterbacks on the roster.

That’s not to say the team won’t move Rudolph if a team blows them away with an offer. If someone wants to overpay and send Pittsburgh a fourth for him, I’m sure they’d seriously consider making that move. There’s really no team with a quarterback situation desperate enough to make that level of a panic move right now, though, so I’d point to Rudolph sticking on the roster this year.

Even if Pickett passes Rudolph and ends up second on the depth chart, there’s value in keeping Rudolph. Say what you want about how he’s performed as a starter, but he has experience starting in the league and he knows what it’s like to be a rookie quarterback entering the NFL with expectations of potentially taking over as a starter.

While his path wasn’t as linear as Pickett’s could potentially be, it was initially assumed Rudolph would be Ben Roethlisberger’s successor. His experience going through that could be valuable as a leader and a mentor for Pickett, regardless of where they end up on the depth chart.

At this point, Rudolph is more valuable to the Steelers than a future sixth-round pick would be. His experience as a starter could be useful in case of injury, and for a team with intentions to compete this year, having an experienced backup is important. Although Rudolph wasn’t the best in 2019 when he stepped in for Roethlisberger, he kept the Steelers competitive and rarely let them get blown out. While he was eventually replaced by Devlin Hodges, he also has a few extra years of development under his belt now and could do the same thing for a team that’s going to be led by its defense.

I don’t think the intention is for Rudolph to play any significant on-field role this year, but his presence is helpful in a variety of ways and his ability to step in as needed is important. Ultimately, I’m in the camp now that holding onto him is the right decision. Especially because of how little of a chance Oladukon has gotten, I’m not comfortable entering the regular season with two rookies behind Trubisky. Unless a team is going to blow them away with an offer, they should keep Rudolph, and it sounds as if that’s the plan at present.