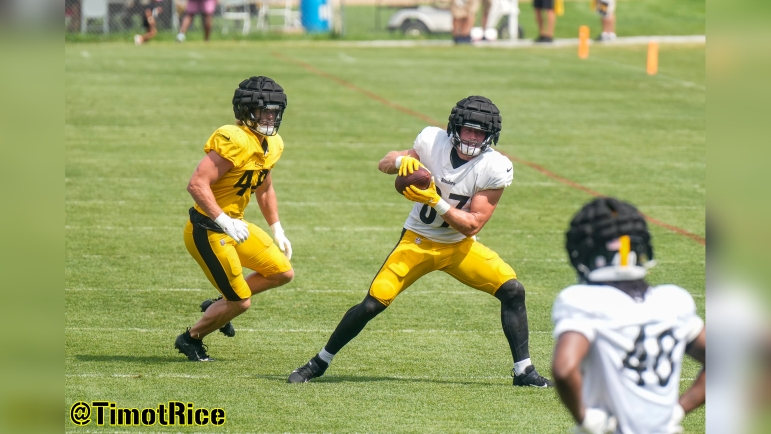 As a second round pick, Pat Freiermuth had some pressure on his shoulders and he handled it well. He stepped in and became a big target finishing fourth on the team with 79 passes thrown his way. In his rookie year he finished with 60 receptions, 497 yards and 7 scores with 5 of those coming from week 9 on. The Steelers are looking to expand his role in 2022 and with improvement separating against Man coverage could lead to a big year.

Zach Gentry is the number two tight end and started to show the potential to be a bigger part of the offense late in 2021. Over the last four games he had 12 targets and 10 of his 19 receptions. He came into the 2021 season bigger and stronger and he has really embraced the role of a blocking tight end. The Steelers could use more two tight end sets and with his size he should be able to win on combatted catch opportunities.

Three seems to be a good number on the roster for the tight end group so who do you want for that third tight end position.

He is in his third season with the team and he is a fighter. To this point he has been considered a blocking tight end but he is trying to change that idea. Over the past two seasons he had appeared in 7 games with 2 starts with 2 receptions on 4 targets for a modest 8 yards. He has seen 48 snaps on offense and 49 on special teams while making 6 tackles.

On the positive side, he has experience with the team and they have liked him enough to keep him around the past two and half season. He is probably the best blocker of this trio and has put in the work to improve his pass catching ability. On special teams, in limited opportunities he has produced on kick coverage teams.

On the negative side, he’s an adequate route runner and may only be a check down option. Of his four targets one was a drop. He has struggled to make the active roster over his 2+ seasons. Does he have value for another team’s roster? Meaning if he were cut; is he likely to clear waivers and make it back to the practice squad?

The brotherly love is strong with this organization and drafting Heyward at times seemed inevitable. He is not what you would call a traditional tight end and that was evidenced by his usage in college. He ran the ball over 200 times and had nearly 100 receptions. But if you watch him play, he doesn’t need a position. He is a football player and will do whatever is asked of him.

On the positive side, he carries the Heyward gene of being highly competitive. With his background he has experience playing in the backfield, with his hand in the dirt and in a two point stance. He has displayed good hands and an ability to create after the catch with agility and physicality. Of these three players he may be the best receiver.

On the negative side, he is undersized as a tight end and will have to show he can hold up as a blocker. As a rookie, will he be able to grasp everything that they put on his plate. Yes, he has versatility but will they be able to take advantage of it?

He was a third round pick of the Packers in 2019. That was the same year the Steelers took Gentry. He was a better receiver than blocker coming out and was considered by many a top five tight end in that draft class. He spent two seasons with the Packers playing in 20 games with 2 starts. For his career, he has 19 targets and 15 receptions for 129 yards and 2 scores.

On the positive side, coming out of college he was considered a good route runner with above-average ball skills. His best fit is as a move tight end with good athleticism and solid ability after the catch. As a former day two pick in the draft he may have ability that can still be harnessed.

On the negative side, he played with Aaron Rodgers and managed only 15 receptions in two years. He was suspended for two games in 2021 for violating the NFL substance abuse policy. He has limited special team experience and would need to fill that role as the third tight end.

Worst Game: Hasn’t been on the field since January of 2020.