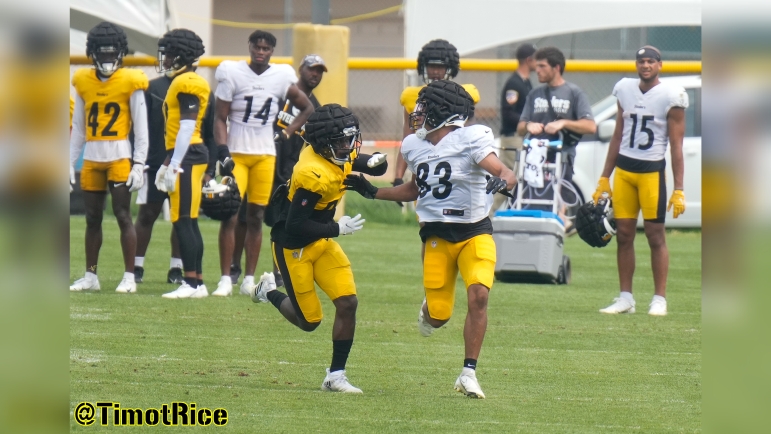 While Pat Freiermuth remains at the top of the depth chart in the Pittsburgh Steelers’ tight end room, things have gotten shaken up since last season. Gone is Eric Ebron, for one thing, who entered the 2021 season as their co-starter with the then-rookie Freiermuth, and Zach Gentry is firmly entrenched now as the number two after establishing himself as an offensive contributor last year.

Up to this point, there is no compelling reason to believe that sixth-round pick Connor Heyward is not the favorite to occupy the number three tight end role on the 53-man roster, even if he is not a traditional tight end. Speaking to Pat Kirwan, Jim Miller, and Paul Alexander on Movin’ the Chains on SiriusXM Radio on Friday, offensive coordinator Matt Canada talked about the younger Heyward.

“All the things he can do, he’s a very diverse player. He can go make catches, he can block, he can do some different things”, he said. “We’re being careful in how much we give him too fast, because he can do a lot of things. But obviously we don’t want him playing slow, we want him playing fast, and we’ll keep feeding him as we go. We’re trying to get a whole bunch of stuff on him as fast as we can, but excited about what he could potentially continue to become day after day”.

The Steelers did install him into the tight end room when they drafted him, presided over by Alfredo Roberts, now in his second season with the team following the retirement of long-time tight ends coach James Daniel (not to be confused with new offensive lineman James Daniels).

At 6’0” and 230 pounds, Heyward doesn’t neatly fit into any one box. The Steelers’ roster on their website lists him as TE/FB, and his role is typically described as that of an H-back, sort of a jack of all trades, master of none.

As Canada alluded to, though, you can’t give him too much too fast before he displays a proclivity to be able to perform a task. Up to this point, they have used him pretty much exclusively as a tight end-type player, but we could, indeed should, see that evolve over the course of the next month.

How he fits into the structure of the team remains to be seen. If indeed he makes the 53-man roster and dresses on Sundays, we can wager that his primary asset as a rookie will be as a contributor on special teams, but the Steelers do seem to believe that he can develop into something more than that, given time.