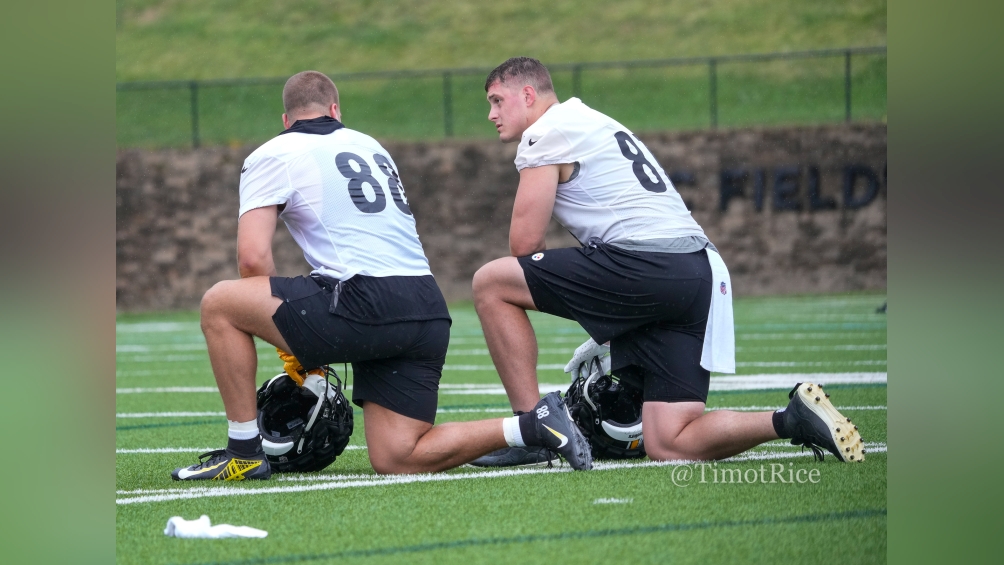 One of the favorite topics of reporters to ask about during the offseason is whether or not the Pittsburgh Steelers will employ more packages on offense involving multiple tight ends. Not in some years, however, have they been better equipped to actually run out of the 12 personnel package than they are this year.

That would be due to the development of their two young tight ends, second-year Pat Freiermuth and fourth-year Zach Gentry, the latter a 2019 fifth-round pick who was drafted with the knowledge that he would be a project in need of development.

Well, that chicken has come home to roost, and even though that saying is usually invoked with a negative connotation, this time, it’s a good thing. But will we actually see Gentry and Freiermuth on the field together more this year?

“I think so”, Gentry told reporters on Saturday. “We’ll see. It looks good so far when we’re out there. It’ll be important to be able to run the ball with two tight ends and be able to do play action, things of that nature, so I think that’ll be something you see”.

To what I expect is many people’s surprise, Gentry played over 500 offensive snaps in 2021 when you include the postseason. Considering he had all of 69 snaps of playing time through his first two seasons, dressing for just six games, that’s quite a change.

He began last year as the number three tight end while the Steelers still had Eric Ebron, a former Pro Bowler and first-round pick who currently remains a free agent. Yet he also entered the season as the team’s primary blocking tight end, a role he held on to throughout the campaign.

Though he has now established himself in that regard, however, he is also hoping to contribute more in the passing game, while, on the flip side, Freiermuth is working on improving his blocking game, particularly as it concerns in-line assignments.

If the Steelers can develop these young men into an effective dual-threat duo, then they can have a very effective 12 personnel package, which is all the more important with the transition at quarterback this year, Ben Roethlisberger no longer around to whip the ball around 40 times per game.

The offense wants to run the ball more, and about the best thing you can do to help that, barring having a mobile quarterback, is employing an effective two-tight-end set that gives you blocking personnel while not allowing the defense to commit to the run, knowing that both tight ends can catch.

That’s the goal, and it’s a package that Bill Belichick in New England has long favored for obvious reasons, but it’s not been a dominant pattern in Pittsburgh in some time—and even the last time it was, it was primarily a run look. If they can get it going this year, it would be a whole different story, one well worth reading.