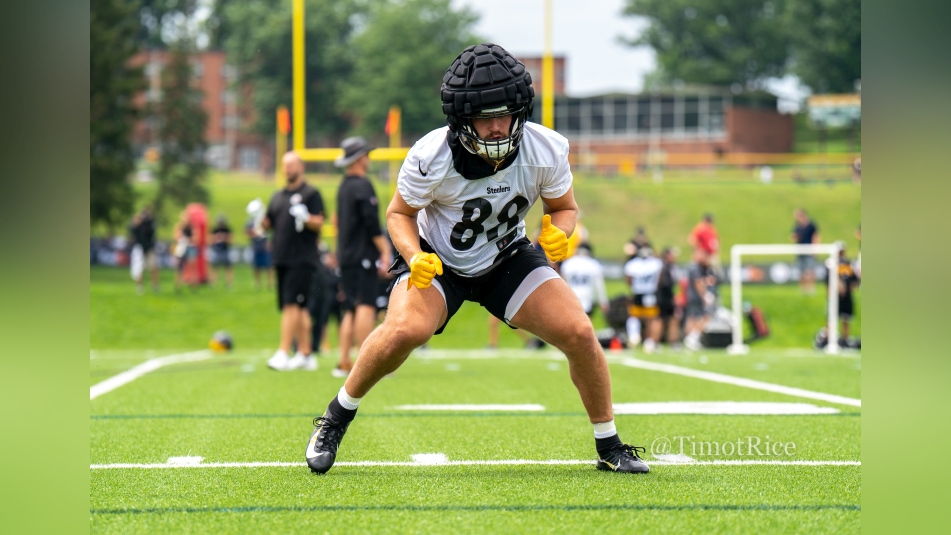 Pat Freiermuth enjoyed a breakout rookie season in 2021 as a member of the Pittsburgh Steelers, quickly emerging as the top tight end in Pittsburgh while taking advantage of some unfortunate injuries for veteran tight end Eric Ebron, which allowed Freiermuth to see the field more often and truly develop a great rapport with quarterback Ben Roethlisberger.

Now, entering his second season in the NFL, Freiermuth finds himself as a key offensive weapon for the Steelers as the black and gold try to break in a new quarterback under center, whether that’s veterans Mitch Trubisky and Mason Rudolph, or rookie first-round draft pick Kenny Pickett.

Freiermuth is going to be a key player for the Steelers overall offensively as a passing game option, but second-year tight ends coach Alfredo Roberts is hoping to expand the standout young tight end’s role moving forward, getting him even more involved in the passing game downfield, something he wasn’t really asked to do as a rookie due to the limited route tree in offensive coordinator Matt Canada’s scheme at the time, as well as some of the physical limitations of Roethlisberger and the inability to protect longer than a few seconds by the offensive line.

That should all change in 2022, where Freiermuth can run deeper routes, make more plays over the middle and really stress the opposing defense up the field. Improving on his poor yards per catch number of 8.2 should be a quick, easy fix overall for Freiermuth in Year 2 under Roberts’ guidance.

Steelers are tweaking their offense to find bigger roles for Pat Freiermuth and other young tight ends https://t.co/eg3oyGixmM #Steelers pic.twitter.com/Re2Bw4LPDV

At least, that’s what Roberts is hoping for, he said during an interview with the Pittsburgh Post-Gazette’s Ray Fittipaldo.

“I would say sometimes the ball just doesn’t find you,” said Roberts, regarding Freiermuth’s minuscule yards per catch number, limiting big plays, according to original reporting from the Post-Gazette’s Fittipaldo. “You call certain things and the ball goes different places. Matt does a nice job of calling those things and giving him opportunities, but sometimes whatever happens, and the ball just doesn’t get there.

“We’re going to focus on that and try to expand his role. He has the ability to make catches down the field and make down-the-field plays. He wants to do that. But the ball has to find him. You can’t force it.”

Freiermuth certainly has the abilities to make plays down the field, but as has been written about and talked about ad nauseam, Roethlisberger didn’t quite care to target the middle part of the field past 10 yards, where Freiermuth thrived in college. Freiermuth’s routes were of the quick, short variety aimed at showing his numbers to Roethlisberger more often than not as a security blanket.

After becoming a consistent red zone threat in 2021 with the Steelers, leading all rookie tight ends with seven touchdown catches, the goal for Freiermuth this season is to bring more big-play abilities to the table between the 20s in the second year under Canada. His emergence as a downfield option could provide a massive boost to an offense that struggled to string together drives in 2021.