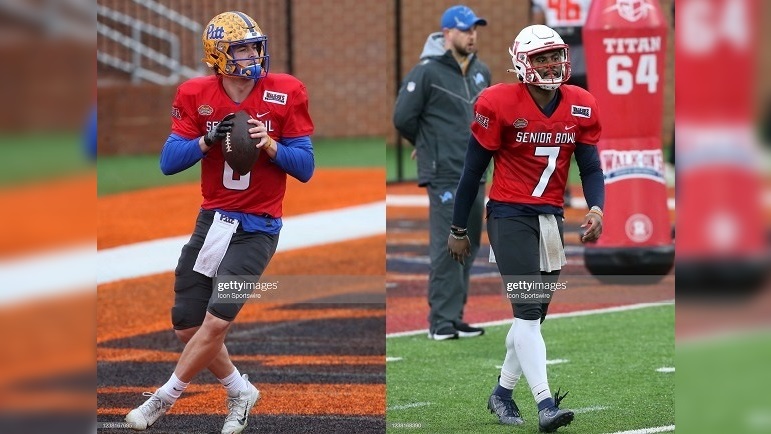 The Pittsburgh Steelers are an organization that has thrived off of stability and consistency. They are a team that limits the margin for error and likes to stick to a conservative means of doing business while occasional calculated risks thrown in here and there when they feel confident in its payoff.

This trend continued Thursday night in Round One of the 2022 NFL Draft, and frankly, we should have seen it coming from a mile away.

I am at fault as much as anyone else that was penciling in Liberty QB Malik Willis to the Steelers as their preferred QB of the future. The evidence of their perceived interest in Willis was overwhelming. They visited with him several times at the Senior Bowl and actually speaking with his family which we at Steelers Depot got to see up-close. They interviewed him formally at the NFL Combine and sent the house to his Pro Day, failing to conceal any possible interest with grins as wide as the Grand Canyon while he put on a show in front of NFL personnel. They brought him in for a pre-draft visit on the last day that pre-draft visits were allowed to get him into the building after all that previous exposure to see him one more time.

Given Mike Tomlin’s comments about QB mobility being so vital in today’s game and seeing Lamar Jackson and the schematic problems he creates for a defense twice a year in the AFC North, it almost felt like Tomlin and the Pittsburgh Steelers were sure to select Willis who brought the best traits as a runner as well as the strongest arm as a passer into the fold to develop him into that potential upper-echelon QB in the league that needs to be developed, but could become an X-factor in the NFL with the traits he has.

While all of these statements may be true, they frankly don’t match up with Pittsburgh’s business model.

The selection of Pitt QB Kenny Pickett at #20 overall does.

Kenny Pickett projects to the NFL game easier than Malik Willis at this current stage in time. He has been touted as the most “pro ready” QB in this draft class which is exactly what Pittsburgh wants. They don’t want a projection but rather a sure thing they know they can rely on. Josh Carney of Steelers Depot recently posted an article addressing GM Kevin Colbert’s comments about Pickett’s familiarity with a pro system and how that will provide a smooth transition to the league:

“Yeah, we talk about it all the time. I mean, he’s coming from a pro system and sometimes it’s an easier transition. It doesn’t mean the player coming out of it can’t make that transition. It may take a little bit longer and you gotta be careful as to not over evaluate a player because he’s coming from a familiar system,” Colbert said regarding Pickett’s transition to the NFL, according to video via the Steelers’ YouTube page. “But I think Kenny, again, coming out that’ll help him. Going to the Senior Bowl helped him. And again, that was another great week where we got to see the top guys all in the same venue. So it’ll be familiar for him, but again, he’s gonna go from being a great college player to hopefully a great NFL player for us.”

I have said from the beginning of the pre-draft process that Malik Willis has the most upside of any QB in this draft class, but if you don’t think that your team can properly develop him, you should not take him because it won’t work out. Frankly, the Pittsburgh Steelers showed with the selection of Pickett that they agreed with that statement as they opted for a more “pro-ready QB” with perceived limited upside over a prospect with immense physical tools, but was a clear project that would need to be brought along slowly. That’s just not the Steelers’ M.O. They want to be in the thick of the playoff hunt every year. They aren’t about taking “gap years” to try and build up a roster. Rather, they will make the most they see fit that will make them competitive and give them a chance to win right now. This holds true with the selection of Pickett who has already been mentioned by Tomlin and Colbert as being in a competition for the starting job with Mitch Trubisky and Mason Rudolph.

This shows Pittsburgh’s intentions to compete in 2022, selecting Pickett who is far less of a projection than Willis and has a realistic chance to push for the Week 1 starting job. Is it the right move in the long-term? Time will tell as we could point to the selection of Trubisky over Patrick Mahomes or say Sam Darnold over Josh Allen as players that were more “pro ready” coming out of college over the players that were deemed “projects”, but possessed immense physical attributes. Taking Pickett was the safe play, and Tomlin said as much in the post-selection press conference:

“We talked about his high floor. HIs high floor was because of his intangibles. But also the anticipation and the pro, accuracy were very obvious and consistent when studying his tape.”

The Steelers aren’t a team commonly known for taking risks, and they didn’t chance that trend in this draft. While they may have been enamored with the possibility of Willis, Pickett provides much more of a “sure thing” in their eyes. Colbert has preached the importance of accuracy at the QB position, and Pickett enjoyed his best statistical season last year where he completed 67.2% of his passes, posted the second-best catchable target % of the draft class, and actually led the draft class in on-target % in the red zone via the data provided by Clayton Eckert of Steelers Depot in his recent studies of the 2022 QB class where he states:

This highlights [Pickett’s] impressive accuracy and volume in scoring situations where defenses have less ground to cover.

Accuracy? Check. How about Tomlin’s factor of mobility? He has that as well, as he was initially recruited by OC Matt Canada to Pitt to play in his offensive system he will now run with the Pittsburgh Steelers that requires him to maneuver the pocket, create outside of the pocket as a passer, throw off of play action and make throws off-platform, as well as be able to create as a runner with his legs when the play breaks down which are all traits Pickett showcased in his final season with the Panthers.

Accuracy? Check. Mobility? Check. How about character/culture fit? You don’t even need to ask this question as Pickett has basically been an honorary member of the Steelers organization for the last five years being just across the hall at the UPMC Rooney Sports Complex. Colbert and other members have been able to see Pickett at practice and at home game at Pitt for years leading up to this point, watching him develop as a player as well as he maturation process. The stories of Tomlin sitting down with Pickett after practices the chat it up about football and life. The intrigue of Canada recruiting Pickett to Pitt and now having that same guy under center for him at the NFL level. Colbert and Tomlin made their intentions known the entire time and voiced those loud and clear Thursday night:

“We’re super, super excited to be able to draft Kenny Pickett with our first round pick,” Colbert said in his opening remarks after making Pickett the pick. “Honestly, never thought he would make it to us at 20. Exciting times for us, for Kenny, for the University of Pittsburgh and for Pittsburgh in general. It’s great. We couldn’t be more excited.”

“Boy, we circled the globe or at least United States here. Um, the last several months, man, just, exploring and researching…we’re excited about it,” Tomlin said. “To be able to not only know what he’s capable of, but to see his process, his maturation process, his developmental process, just a great deal of comfort. And we’re excited.”

QB Kenny Pickett isn’t the sexy pick that a lot of Steelers fans, including myself, were clamoring for in Malik Willis. He doesn’t have the physical traits or immense upside of Willis who is undoubtedly raw, but has a tantalizing ceiling. However, Kenny Pickett, is familiar, safe, and proven to virtually everyone in the organization. In a league where you are more likely to swing-and-miss on drafting a franchise quarterback than you are to hit on one, Pittsburgh opted for the option they knew the most about and felt the best about translating to the pro game. They believe his physical traits and intangibles are more than enough to operating as the franchise quarterback of the Pittsburgh Steelers for years to come.

The Steelers stuck to their guns and their way of doing things. They had their pick of the litter of QBs, including WIllis, but opted for Pickett and how he matches perfectly with what they want to do as a team. Again, time will tell if selecting Pickett over Willis was the right choice, but given the fact that they had conviction to make the move with all options on the table, I genuinely applaud them for staying true to who they are as an organization.

What are your thoughts on the selection of QB Kenny Pickett? Do you see the reasons why Pittsburgh opted for Pickett over Malik WIllis? Do you think it was the right decision for the long-run? Please leave your thoughts in the comments section below and thanks again for reading!