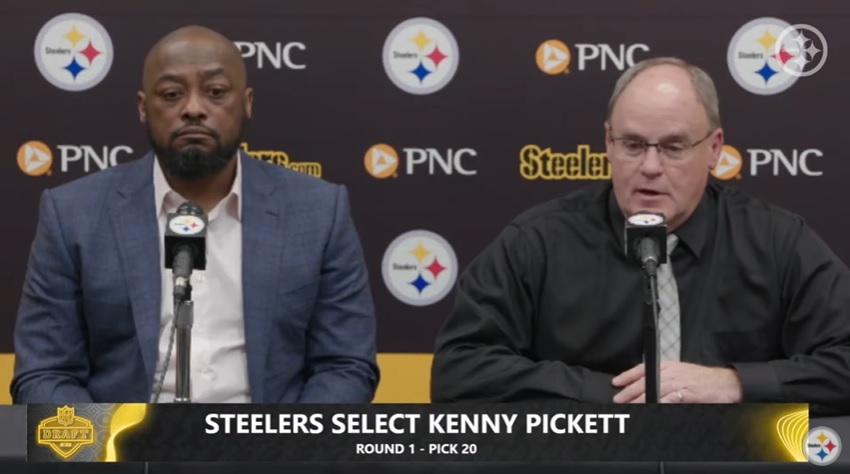 Who will be the Pittsburgh Steelers’ starting QB Week 1? No one knows. Not even the Steelers. At their post-draft press conference, Mike Tomlin and Kevin Colbert framed it as an open competition this summer between Mitch Trubisky, Mason Rudolph, and Kenny Pickett.

Tomlin and Colbert both told reporters that all three men, including Pickett, will have the chance to compete.

“Quarterback is the most critical spot in and on the National Football League,” Colbert said after making the pick. “That’s not anything to take away from Mitch Trubisky or Mason Rudolph. We’ve got three young quarterbacks. We’ve got great competition. As Coach mentioned, they’ll all be in it to see who becomes the starter. But I think now we’ve got three real good options.”

As Colbert alluded to, Tomlin said Pickett “certainly” would be given the chance to compete.

“He’ll be given the opportunity to compete, certainly,” Tomlin said in the presser.

Rudolph is the only returning Steelers QB from 2021 to 2022. Trubisky was signed at the start of free agency, and at the time, was the frontrunner to be the team’s starting QB. But nothing would be given, especially with the comfort they had in Rudolph, who has a leg up on Matt Canada’s system.

With Pickett in the mix, regarded as the most pro-ready QB in the 2022 class, he now enters that competition. He wasn’t as raw or underdeveloped like other quarterbacks in this class like Malik Willis, Matt Corral, or Sam Howell. Pickett has the chance to play right away. Now, it’s up to the Steelers to find a way to divide up the reps to get an accurate evaluation heading into Week 1.

“We talked about his high floor. HIs high floor was because of his intangibles. But also the anticipation and the pro, accuracy were very obvious and consistent when studying his tape.”

It’ll be the first time the Steelers have had uncertainty at QB heading into a season in two decades. But Pittsburgh has options, competition is healthy, and hopefully someone stands out from the rest by September.