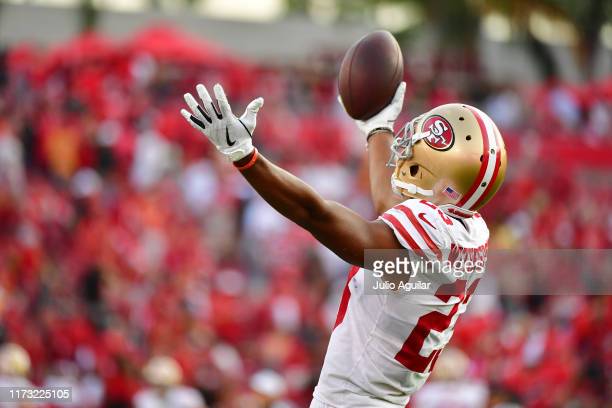 Kevin Colbert and the Pittsburgh Steelers are keeping us busy, making a last-second move to add CB Ahkello Witherspoon from Seattle Friday afternoon.

Witherspoon, drafted by the 49ers in 2017, was signed by Seattle this past offseason. But he fell out of favor and now shipped to the Steelers.

So what are the Steelers getting with Witherspoon? After watching two games with the 49ers last season and all three with Seattle this preseason, let’s find out.

At nearly 6’3, 200 pounds with 33 inch arms, Witherspoon is a long, wiry cornerback. He tested extremely well at the Combine with a 4.43 40, 40.5 inch vertical, and 10’6″ broad. Certainly, some of those athletic, favorable coverage traits show up on tape. Witherspoon uses his length and size to his advantage, able to press and mirror receivers in man coverage.

Check out this clip of Witherspoon from last season (with the 49ers, #23) against Arizona. LCB, bottom of the screen. Man coverage on the WR running a comeback (possible sight adjustment here by the wideout). Witherspoon mirrors and matches the route as well as you can, breaking down with the receiver and driving off his foot as the wideout comes out of his break.

No throw on the play, Kyler Murray is sacked, but it’s as good man-coverage as you could coach up.

Let’s look at it this preseason with Seattle (#2). Again, the LCB, bottom of the screen. WR runs a curl route. Witherspoon matches it and contests the throw well, getting his hand on the ball. Some bad luck with the ball popping up and still ending up in the receivers hands, ideally Witherspoon keeps his feet here, but I still consider this a good rep.

In his first four years in the league, Witherspoon has four interceptions. I put together a compilation of all four. Take a look.

The middle two were sort of “gimmies” off Jameis Winston and Carson Wentz but I really like the first and fourth. In the first, which came last season, Witherspoon makes a big-time red zone play, tracking and high-pointing the football, showing off his length, athleticism, and frame. Key takeaway to prevent the Cardinals from putting points on the board.

The last clip versus Jacksonville came off miscommunication, the WR running a streak instead of converting his route to the comeback, but a nice job by Witherspoon to track the ball and make the play. Nice job initially with his off-hand jam (punch with hand opposite the WR release) and pin the wideout to the sideline.

In coverage, the two areas he needs to work on are angles and – this one could be tough to improve – some stiffness against in-breaking routes. Two clips of each problem shown in the below two videos.

First clip against the Jets. 3rd down, bunch set to the field. Witherspoon, the RCB at the bottom, playing off coverage and gives up the catch. Not a lot you can do here as the corner, arguably, but I don’t like the angle Witherspoon took to the ball. It’s too sharp and he’s coming under the receiver instead of playing to the upfield shoulder. Had the WR not run out of room or perhaps made a better effort, he could’ve turned upfield. Still ends up allowing an extra yard or two he shouldn’t have.

In the next clip, late in that same Jets’ game. Again as the RCB to the bottom, Witherspoon again fails to play to the upfield shoulder in this scramble drill. And gives up the touchdown. Tough spot in a scramble drill but he’s under the route and can’t contest the throw or make the tackle. That’s why you play to the upfield shoulder even when going after the ball. So if you miss the ball, you still have a chance to make the tackle.

As a long, leggy corner, Witherspoon shows some stiffness in his game. Two clips of it below. LCB, top of the screen. Good press here initially but he loses the receiver at the top of his route and is put in trail position. Worse, he misses the tackle and it goes for big YAC and a huge gain overall well inside the Seahawks’ ten-yard line. Witherspoon ended up barely playing the rest of the game, seeing just one or two more series (and wasn’t on the field again until late in the half, this catch came on the opening drive) and was probably evidence Seattle was souring on him.

In the second clip against the Raiders from this preseason, Witherspoon (LCB, bottom of screen) loses the WR as he breaks to the inside on this dig. Ball isn’t thrown his way but the receiver was open and created separation.

Those can be tough plays and no cornerback is perfect and if Witherspoon was, he wouldn’t be on the trade block. But you see some of that stiffness when defending breaking routes when he can’t use his length and size to jam and disrupt the route vertically.

In my scouting report of his way back in 2017, I heavily crticized his tackling and run support. I’ll link the article below but here’s what I wrote.

“But man, against the run and as a tackler, he’s horrific. It’s a good thing he’s so apt at breaking up passes. I’m convinced he does it just so he doesn’t have to tackle….he struggles finishing the tackle and half the time, isn’t even involved in the play. Why he needs to play in a man scheme to minimize those issues. Let him play the man and stop the catch instead of tackling the catch.”

But he had spent four years in the NFL. Was there improvement? Good news. There has. At least from what I’ve seen. Witherspoon looks to be a more physical and aggressive tackler than I profiled. This is my favorite play of his. 3rd and 8 against Arizona last season. Witherspoon is the LCB to the bottom of the screen.

From a reduced/nasty split, WR Christian Kirk runs underneath the “pick” of the TE. With the 49ers playing Cover 1, Kirk has a free release and space to the middle of the field and Kyler Murray hits him. Looks like an easy first down. But Witherspoon does a good job of working over the pick, taking a solid angle to the ball, and making a key open field tackle short of the sticks.

He allows just one yard of YAC and forces 4th down (which the Cardinals did convert thanks to a Murray scramble). But still a really nice play.

Two more clips from that Cardinals game in which Witherspoon had a career-high seven tackles. First is him attacking a tunnel screen for a loss The second is an open field stop on Larry Fitzgerald in the right flat for a minimal gain. Aggressive, wrap-up plays that got the ball carrier on the ground.

As those clips showed, Witherspoon has worked at both cornerback spots. Moreso at LCB than RCB but he should be comfortable playing either. Interestingly, he appeared to play a tiny bit of safety this preseason with Seattle, logging a couple of snaps there in the opener against the Raiders. 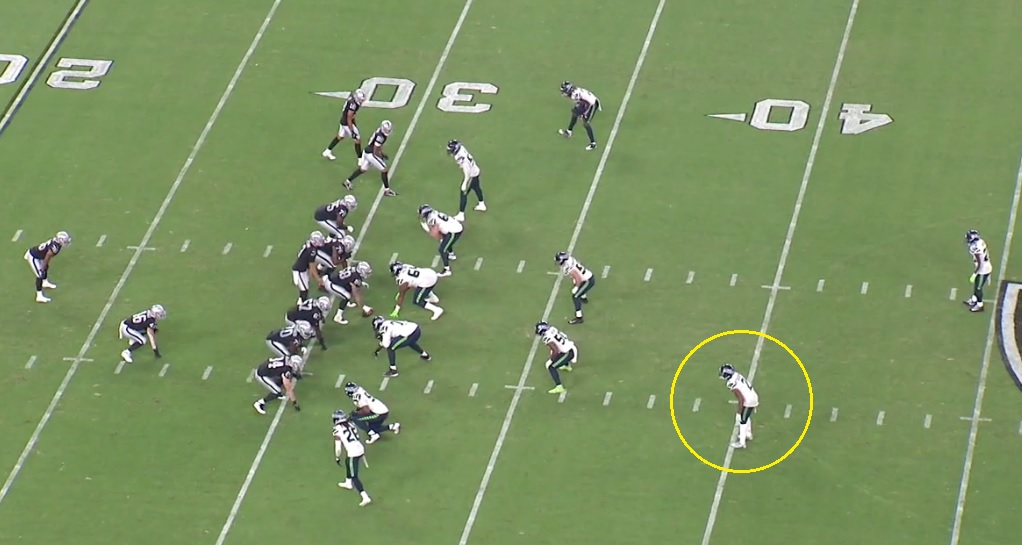 But in Pittsburgh, he should function as an outside cornerback.

Overall, Witherspoon looks like a similar but better cornerback than I saw on his college tape, primarily due to improved tackling. Which makes sense. Our report also called him raw who needed time to develop, an underclassman with just 21 career college starts before leaving for the NFL. He also played just one year of high school football. So I’ve seen growth and development in his game after spending four years focusing solely on professional football.

Certainly, his height, length, and timed athleticism are impressive and hard to find. Pittsburgh’s done their best to stack 6’0+ corners and now have three of them with James Pierre, Justin Layne, and now Witherspoon. Witherspoon uses his length well and does well in man-coverage against vertical routes or in Cover 3 as the deep 1/3 defender (which I suspect is why Seattle initially signed him). He tracks the ball well with the ability to finish and has cleaned up some warts in his game, showing more physical overall play.

His career arc has still been a bit funny with a lot of highs and lows. He’s seemed to play well but then also fade. In 2019 with the 49ers, he started the first three games before suffering a foot injury. He began 2020 as a backup, started Week Two, was named inactive the next two weeks, came back to play 41 snaps in Week 5, played only 19 defensive snaps over the next eight games before starting the final three of the season. Seattle signed him as a potential starter and then dealt him today once Witherspoon obviously fell out of favor. He’s also never played more than 14 games in a season and just 21 over the last two years of a possible 32.

How will Pittsburgh use him? Again, on the outside. It’s hard to see him being named the immediate nickel corner over James Pierre, with similar strengths (size/length/ball skills) but still a better tackler than Witherspoon. Witherspoon could be quality CB depth, he’s much better than Justin Layne, and maybe he carves out some sort of dime role on this team, though it’s hard to figure out exactly where he slides in.

Playing Witherspoon in high-probability passing situations is ideal because coverage is still his clear strong suit. He also should have a role on special teams, his length and straight-line speed are attractive there, though he hasn’t played a ton of special teams the past two seasons with the 49ers.

If you want to check out the wayback machine, here’s our original profile on Witherspoon coming out of the draft.