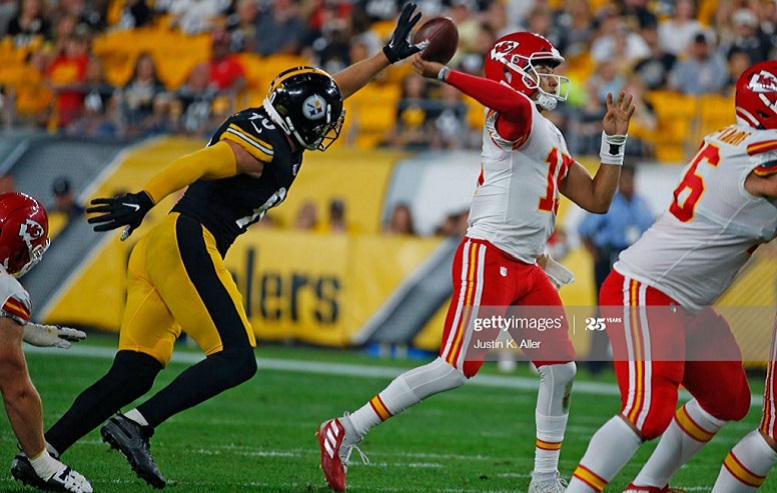 The focus this time 24 hours ago was on how the Pittsburgh Steelers would begin their 2021 season with a Week 1 matchup against the Buffalo Bills. Now that the entire schedule has been released, Good Morning Football’s Peter Schrager has circled an end-of-year matchup.

In a list of five “sneaky awesome games” flying under the radar this season, Schrager included a Week 16 game against the Kansas City Chiefs in Arrowhead.

Here’s part of what he had to say.

“A gift from the scheduling gods. Whether that’s for playoff implications or seeding or home-field advantage. It will be a true test. Remember last year, the Steelers had late games against big teams and just fell apart. Steelers were awful when it mattered most. I think the Steelers are going to really be tested in this one.”

Tested is an understatement. The Chiefs enter another season as the AFC favorites after appearing in the past two Super Bowls, winning in 2019. Since Patrick Mahomes entered the lineup in 2018, Kansas City has gone 38-10. Mahomes has started one career game versus the Steelers, his third career start, beating them 42-37 in 2018. That day, he threw for 326 yards and six touchdowns, including three in the first quarter as the Chiefs stormed out to a 21-0 lead.

So seeing them show up late in the season, a crucial time of year, isn’t ideal.

Schrager went on to point out the Steelers’ collapse down the stretch last season, notably getting upset on Monday Night Football to the Cincinnati Bengals. He believes Week 16 can be a chance for Pittsburgh to redeem themselves.

“If you want to say last year, all the losses late in the season, that was just whatever. It was because it was a weird year and the scheduling being moved a bunch of ways. All these losses can be washed away if you beat the Chiefs.”

As we wrote about this morning, the Steelers used to be one of the best late-season teams under Mike Tomlin. But they’ve gone in the wrong direction the last three years, posting a 6-10 record in December/January over that span. Pittsburgh’s end-of-year regular season schedule is brutal. Five of their last six games are versus playoff teams, including the final two weeks versus Cleveland and Baltimore.

Check out the full clip and the other four games on Schrager’s list below.