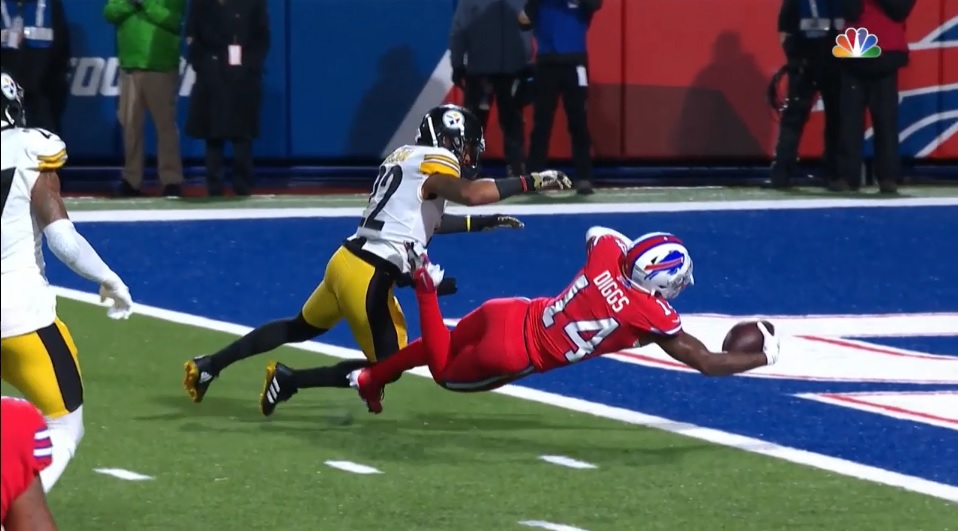 Rightfully so, plenty of focus will turn towards the Pittsburgh Steelers’ offensive performance over the past few games. Literally “offensive” in the worst way. There’s no doubt the defense has been the better of the two units. But we spent plenty of energy last night shooting arrows at Ben Roethlisberger and company.

This defense isn’t absolved either. Over the last two weeks, their story has been a strong first half that folds after halftime. Good gameplan. Poor adjustments. The numbers tell that story. Look at how Alex Smith and Josh Allen, and their offenses, have done from half to half.

Here’s what Alex Smith did for Washington Football Team in Week 13.

Alex Smith 1st vs 2nd Half

Now let’s look at what Josh Allen did last night. An even starker difference.

Josh Allen 1st vs 2nd Half

Two totally different QBs. Allen looked small in the first half, played big in the second.

Combined, here are the first/second half splits of both QBs.

Every number in each category significantly better across the board. And that, of course, is reflected in point total. Here are the offensive points allowed in each half of the Washington and Buffalo games. I specify offensive points to factor out the Bills’ pick six.

37 of the 43 points allowed have come in the second half. Night and day.

The question of “why” is the more interesting one and admittedly, the tougher one to answer right now. We’ll have to digest the Bills’ game throughout the week and look at our charting to provide concrete data. It certainly felt like Keith Butler attempted to blitz more frequently in the second half against the Bills. Josh Allen was able to get the ball out of his hand quickly most times or failing that, rolling out and making plays outside the pocket.

Pittsburgh’s defense basically has the opposite problem of the offense. Keith Butler is really good at coming up with opening scripts. The gameplan is sound and opposing offenses flail around through the script and first 25-30 minutes of the game. Things change at halftime. Offenses adjust, the Steelers don’t. And teams start to move the ball on this unit.

Meanwhile, the Steelers’ offense can’t come up with a winning opening script. They tend to get better later in the game, even if that’s meant just resorting to “Ben ball” and throwing 50 times. That hasn’t been reflected nearly as much the last two weeks but that’s been the general blueprint this year.

That’s not complementary football. That’s far from a complete game. One unit plays well? The other struggles. And it’s hard to win a lot of games like that when there’s one side of the football spinning its wheels. Playoffs are all about answering the question of “who is the most complete, complimentary team?” Right now, the Steelers aren’t part of that group.